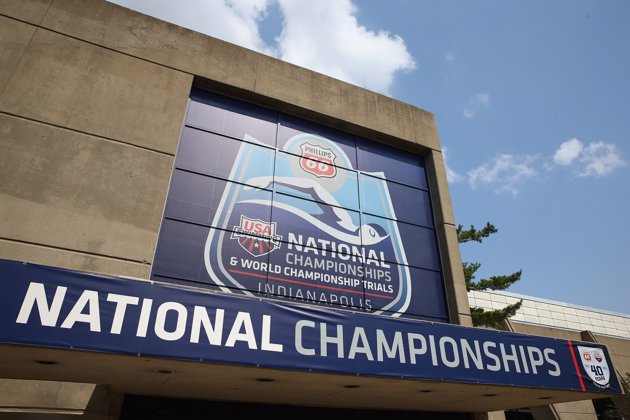 The first night of World Trials started off with a flash, with Olympic stalwarts and favorites Missy Franklin, Colorado Stars, Nathan Adrian, Cal, not disappointing on the first night of finals at the Phillips 66 National Championships, both taking first in the 100m freestyle and punching tickets for Barcelona.

The men’s 100m was a line-up of international experience, with fellow Olympians Ryan Lochte, Jimmy Feigen, and Anthony Ervin rounding out the top 4. Former Texas Longhorn Feigen nabbed the second individual team spot, touching the wall in 48.24, a time that now ranks him 8th fastest in the world, just behind Adrian’s 48.24.

Perhaps most notable were a couple youngsters who put up impressive mid 49’s. Jack Conger, who in February broke Jeff Kostoff’s 30 year 500 yard national high school record, won the “C” final in a time of 49.44, a half second drop on his best time, and also quicker than the entire “B” final. Caeleb Dresser, a spry 16 years of age, demolished Joe Hudepohl’s long standing 15-16 National Age Group record in a time of 49.50, shaving 0.73 seconds off the 1990 mark.

Lochte’s 48.53 and caginess about whether what other events he may or may not swim this week signal that he may be shifting towards shorter events as he gets older.

Missy Franklin’s 53.43 was faster than she swam last year at the London Olympics, and also set a new Nationals record beating Amanda Weir’s former record of 53.58. She displayed her usual back-end resolve, chasing down a field including Natalie Coughlin, who led at the 50 in 25.70, Megan Romero and Simone Manuel.  Shannon Vreeland also had a strong second 50, splitting a tenth of a second slower than Franklin on the second 50 to place second. Filling out the relay will be Manuel (53.86) and Romano (53.90).

USA Swimming’s Phillips 66 National Championships is being held at the Indiana University Natatorium on the Campus of IUPUI. The competition runs until Saturday, June 29.