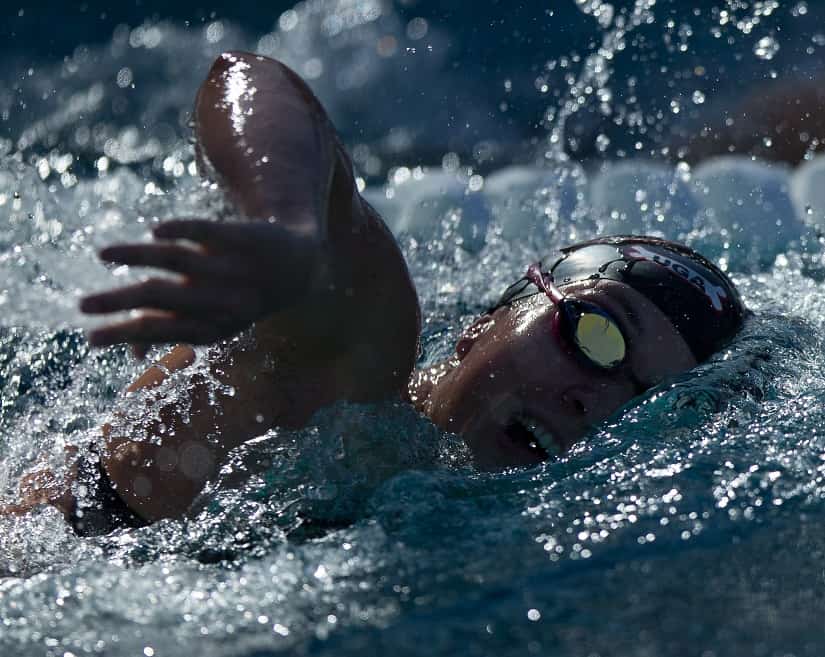 Think your practices are hard? This coach redefined what it meant to “put in work” with his swimmers. You can probably guess what happened next.

I’ve always been a fan of the notion of doing more than the next swimmer. It’s something I have talked about on multiple occasions on this website and within the weekly newsletter; as this willingness to go above and beyond being a defining characteristic of greatness.

To do what others won’t.

(Or for most of us, to do what we wouldn’t yesterday.)

Recently while doing some extra-curricular reading I stumbled upon something that I had to re-read several times to ensure that I wasn’t hallucinating. 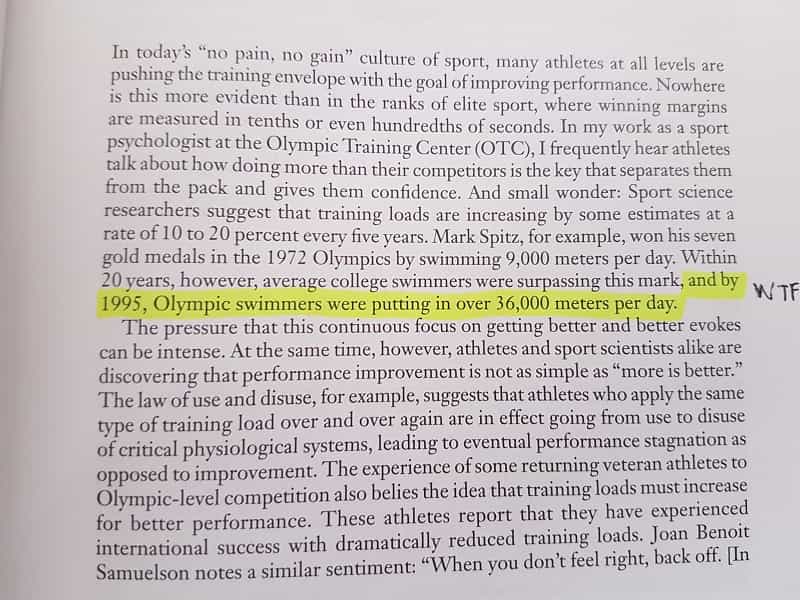 If you are able to read that highlighted portion, than you are probably tripping right now…

Is this a typo? How could someone be training 36,000 meters per day? Not per week…but per day?

There’s a lot going on in there if you read the previous couple sentences as well; the author makes it sound as though swim training is on this perpetually upward climb of meters, and that it is sport-wide.

This is not the case; Mark Spitz’ 9,000m per day (or 54k per week) would be a lot these days for most programs, if not typical of most elite swimmers nowadays. Overall volume probably peaked in the 70’s and 80’s, and has stabilized and if anything decreased since then.

Part of this is a focus on higher intensity swimming, and another is logistics. In college, for instance, the NCAA prohibits the number of hours that can be spent training per week (Janet Evans actually left her college team when this rule was put into place).

Doing some backwards math in my head I figured that it would take around 12 hours of swimming (at a 1:20/100 pace) to accomplish this feat. But this didn’t sound like a one-off stunt.

The way the author phrased it, this feat was being performed regularly.

After doing some webstigating, here’s what I was able to learn about this non-typo.

The story goes back to an article that was published in the November/December 1995 issue of Swimming Technique magazine, featuring an American coach named Jay DeHart.

Over the course of late fall to spring of 1994/1995 he decided to take a group of seven volunteer swimmers, and had them train every day of the week.

During this period they took only two days off (Christmas and New Years), and on Saturdays would do “distance challenge” days where they would swim between 12,000 and 17,000m.

This would lead them into a week of training that would start once school ended, and they’d have the full day to swim and recover.

“It would cover seven straight days, three, four, and sometimes five sessions per day – swimming an average of nine hours per day, and close to 36,000 meters per day,” wrote DeHart.

But what about the shoulders?

The thought of doing this kind of mileage probably makes anyone who has ever had bad shoulders from swimming recoil a little bit.

DeHart emphasized that stroke technique would not falter over the course of the workouts, and that shoulder soreness would be dealt with a pre-determined procedure.

“Once we got into the training, the kids were pretty tired after the first day of 36,000 meters. But it wasn’t until completion of the second day that they really started to enter into the valley of fatigue. It was there they spent the next five full days, their minds and bodies questioning the very cores of their mental and physical constitutions and previous preparation for greatness. There was complaining. There were revelations. But each time our toughness and team support rose to meet the challenges.”

How did the swimmers end up doing?

Prior to this season of highly elevated training his elite squad had only found mild success, with a couple swimmers qualifying for Juniors, “while the rest of the kids were struggling with Senior Regional level meets.”

At the Speedo Junior Nationals later that summer in Tempe, Arizona, DeHart would send just five girls and return with the women’s team championship.

The improvements were epic.

While the times on the scoreboard were impressive, it was the confidence and toughness that come from that exceptionally high amount of training that stuck with him.

Most importantly, the kids developed a sense of toughness that will carry with them further still. They want more than ever to train and compete. And for myself, I won’t stand for anyone telling me they know what an athlete’s limit is before that athlete has been tested.

So what happened next?

This kind of training was not without controversy, as you can probably guess. The club board got together and fired him. The team itself, the Husky Swim Club, formerly based out of Seattle, Washington, doesn’t seem to be around.

The last club results I’ve been able to find online were from 2002, and from all indications, Jay DeHart has been long out of the sport, frustrated with a system that punishes innovation, “particularly if the innovation looks like hard work.”

Mental Toughness for Swimmers: You are Faster and Tougher Than You Think. Swimming is 50% physical, 90% mental. Or something like that. Here’s why you are tougher than you think.