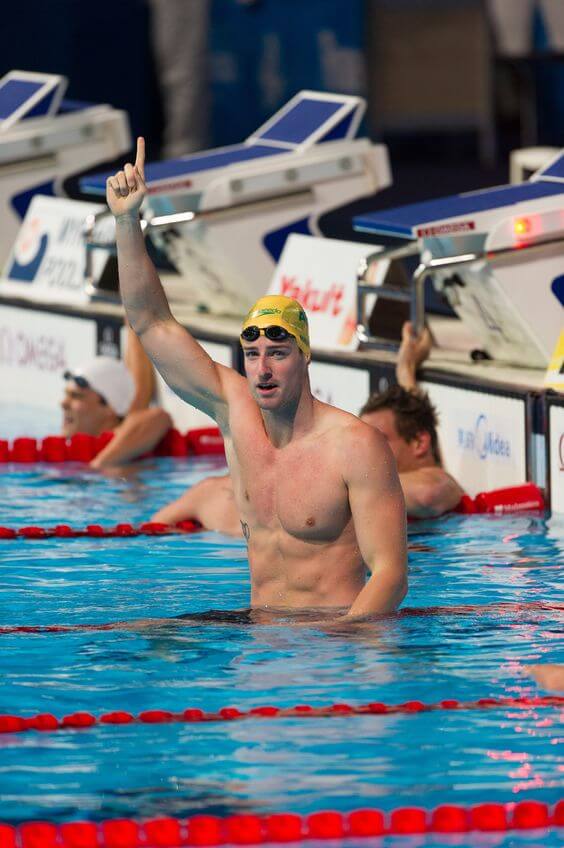 One of the top sprinters in the world, James Magnussen has cemented himself as one of the biggest names in the splash and dash events, winning the silver medal in the 100m freestyle at the London Olympics in 2012.

Over the past year he battled a chronic back injury that has plagued him for years to win silver in the same event at the Commonwealth Games behind countryman Cameron McEvoy.

This was on the heels of a defense of the 100m free world title in Barcelona in 2013, where he bested the man who won gold in London—the United States’ Nathan Adrian.

Magnussen’s best swim so far actually took place before London, at the 2011 FINA world championships in Shanghai. At that meet he swam a blistering 47.49, the fastest time ever performed in a textile suit.

While Cesar Cielo’s world record of 46.9 might have seemed out of reach—for 10 or 20 years, as some coaches and swimming analysts predicted—Magnussen’s swim made the record suddenly seem very doable.

His former coach Brant Best—the two parted ways in September of 2014—spoke to The Daily Telegraph’s Mike Hurst in the months after that ground-rattling performance in Shanghai, where he discussed the preparation Magnussen undertook.

They touch on how Magnussen fell ill just prior to the meet, the need to learn speed without effort, and how to handle the mental aspect of coaching an elite athlete:

The big issue for me was whether he was going to keep his ‘feel’ for the water. I knew he had the background. I knew he had the technique. If he was rested I knew he could swim fast. Then it was all about keeping his head together. I just assured him, OK, we’re in taper. You’re going to be resting
anyway. You may as well be resting like that.

Best notes that he does his training cycles as 3.5 weeks on, half a week off with Magnussen…

If we’re in a longer, more aerobic cycle with three-and-a-half weeks on and a half-week
off. If it’s a more intense cycle we’ll go three and one “off” where we come back to maybe 60 per cent of everything…. Front of the cycle is faster stuff, back of the cycle is more back-end (of the race pace).

In one of the more interesting tidbits, and something I suspect many coaches will take away, is that at the beginning of each mini 4-week cycle Best had Magnussen focus on being fast.

As the cycle progresses the goal is to maintain and load that race speed.

When you’re angry all the blood goes to your hands and feet because you’ve got to fight. When you’re afraid, blood goes to your legs because you’ve got to run. It goes away from your brain. But if you’re composed or if you’re happy, blood flows to your brain. If you’re not emotionally distracted you’ve got to be in a better state to be more intelligent to execute the way you want to execute. And that’s what we do going into meets, more than we do talking about everything they’ve got to do during a race because they know what they have to do. They know how to do it. They’re racers.

Best notes that with Magnussen it wasn’t about making his top-end speed quicker, the goal is trying to make his “easy” race speed easier. With Magnussen having always been a strong finisher in his races, the temptation has always been to sacrifice his strength “in order to develop his weakness” by focusing too heavy on the front end.

We just do a lot of practice at race speed and make him faster at race speed, so his easy speed is faster. Not his fast speed is faster. His easy speed had to get faster. We do a lot of easy-speed work , rather than top-end speed. A lot of coaches were saying you’re got to get his top-end speed up. But that’s not the way he swims. He doesn’t even swim with a top-end speed stroke. It’s almost a 200m-type timing. We did a lot of work to make that better and he’s now now a second faster than he was at Trials last year down the first 50m. But his stroke rate and his stroke count are the same.

The top swimmers, the ones who are able to push through the pain and struggle to get themselves to the podium understand that it is by becoming comfortable—or at least familiar—with the grind and pain…

You’ve got to be able to ‘go’. Your brain cannot be telling you, ‘holy ****. This is the first time I’ve done this. I better shut down and go into protection mode.’ The competitor needs to know, I’ve done this before. I know it hurts, but I’ve done it before. It’s familiar. I am not going to shut down because this isn’t familiar. It’s about familiarity as much as anything we do.

On why swimmers should avoid doing crunches…

Sit-ups develop the wrong set of abs for me. I think we need to develop the abs a little deeper and abs that twist us rather than abs that hold us. We do a lot of twisting, between the shoulders and the hips. The torque we develop – we call it a coil – between the shoulders and the hips develops that chain of power. We can’t do straight situps because that will sit us forward and we can’t be sitting forward like that in the water because bananas don’t swim quick.