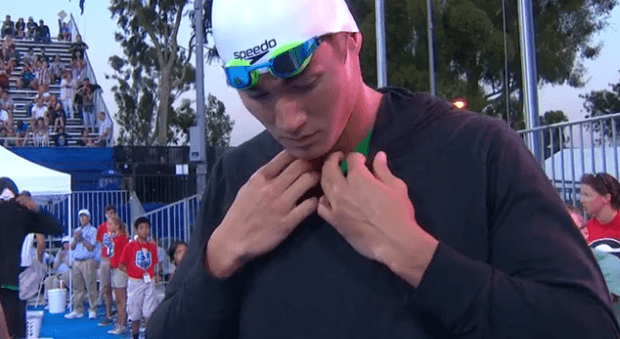 In Part 3 of Team USA’s Behind-the-Scenes series with Nathan Adrian, we get another glimpse into his training and prep at US Nationals earlier this month in Irvine, California. With a successful 100m freestyle win behind him, Adrian prepares for the 50m freestyle on the last day of the meet.

Dave Durden, the head men’s coach at the powerhouse Cal-Berkeley men’s team, discusses Adrian’s prep, and that his less-than-awesome swim in the final of the 50 freestyle would give them something to work on moving forward to not just Pan Pacs next week in the Gold Coast, but also Olympic Trials in 2016.

Here is the video, which was produced by Team USA (a pretty awesome series, by the way).

Also, here is the full race video courtesy of USA Swimming’s YouTube channel with commentary of the 50m freestyle from US Nationals. The field was hilariously stacked, including Josh Schneider, Cullen Jones, Anthony Ervin, and of course, Adrian. Ervin would pull of the quasi-upset, winning in 21.5, with Adrian right behind him.