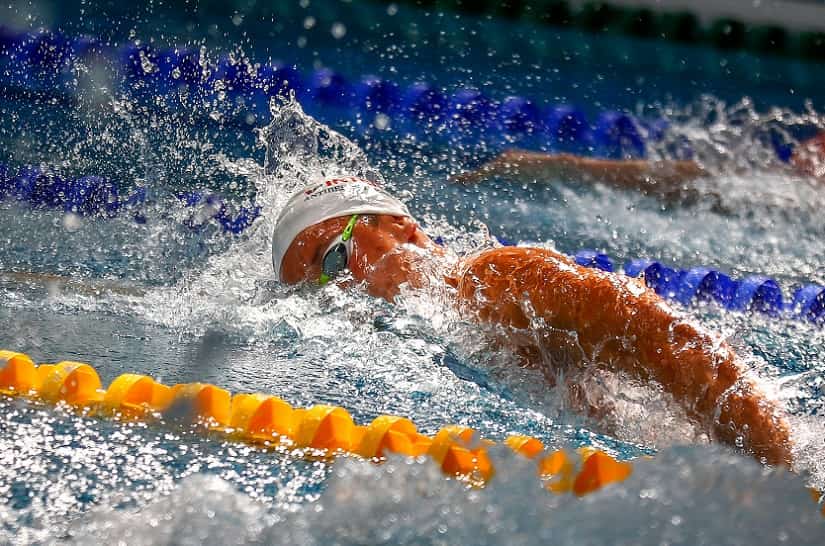 Heyo—fair warning: This article is for debate and information and is not medical advice. Talk to your physician or dietitian before you start smashing some SuperXTREME toilet-cracking pre-workout, mmkay? This isn’t a “Get off my lawn!” post decrying supplements as a whole, or a guide on how to supplement—it’s meant as a warning to swimmers of the inherent risk of snatching a positive doping test from dirty supplements.

You work your butt off in the pool. You show up every day to practice. You do everything right outside of the water too–get lots of sleep, eat well, work on your mental training and crush it in the gym.

In your search for an edge and ever-faster swimming you look towards supplements.

Besides sounding like Friday night’s starting line up at the monster truck rally, a lot of these supplements are pure and utter garbage. And if throwing your money away for a case of the jitters and some indigestion wasn’t bad enough, there’s that whole testing positive on a pee test.

But I get it. I’ve tooled around with plenty different supplements over the years. I am old enough that creatine was widely thought of as a “steroid” when I was in high school and was still taboo.

The reasons that athletes use supplements include:

Rolling the dice with contaminated supplements

Although supplement makers will happily boast that they make products for the elite athlete, none are regulated and few are third-party tested to the point that you wouldn’t fail a USADA/WADA pee test.

A lot of this is because the supplement business is still the wild west when it comes to ingredients and production.

The field of “dietary supplements”—which includes powders, herbs, liquids, gel caps, etc—goes to market without any checking of purity or safety by the FDA. Because the threshold to go to market is so low, any yokel with a kitchen can throw together a “proprietary formula” and market it as the next big super performance enhancer.

When a problem does eventually arise, the burden isn’t on the producer of the supplement to support their claims, it’s on the FDA to take them to court and prove it’s unsafe.  With little governmental regulation supplement makers can be liberal with the claims of their product.

The number of anti-doping violations that swimmers have incurred over the years reflects the risk that they run by taking this stuff.

Here are three of the biggie ones:

In July of 2018 American national team member Madisyn Cox tested positive for 4 nanograms of trimetazidine (a drug designed to “energize and revive damaged heart tissue”*) and was handed a two year suspension.

After having her multi-vitamin—Cooper Complete Elite Athletic multivitamin—tested for impurities, traces of trimetazidine—which itself isn’t FDA approved—were found in both opened and unopened samples. Cox had listed the multi-vitamin on her anti-doping forms from day one, covering a span of seven years. Her suspension was later reduced to six months. 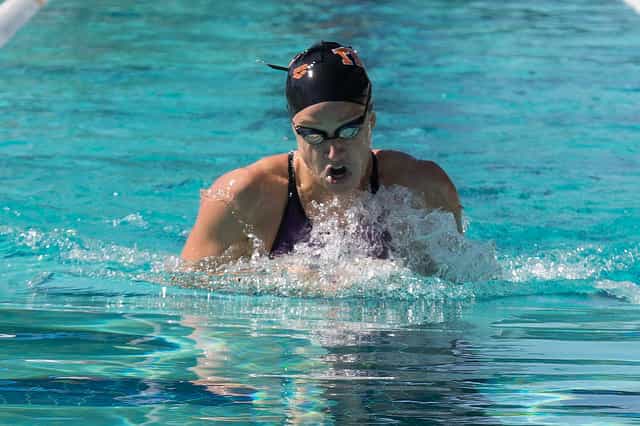 The Cooper Elite Multi-Vitamin is marketed straight at “elite” athletes, is physician formulated …and yet, elite athletes get drug tested. All. The. Time. Since this whole thing went down with Cox the product has been pulled from their website.

In 2008 Jessica Hardy was on the verge of realizing every swimmer’s dream—to represent their country at the Olympics. At Trials that year she had qualified for four events later that summer in Beijing.

While at a training camp preparing for the Games she learned she’d failed a doping test, her sample coming back for clenbuterol, a banned substance that expands bronchial muscles (it’s used to treat asthma) and promoting increases in lean muscle mass [1][2].

Issued a two-year ban Hardy had to give up her spot on the Olympic team. (In a cruel twist, the swimmer who would have moved up to qualify for the Beijing team, Tara Kirk, was unable to be named to the team. By the time the suspension had been handed down the entry deadline for the meet had passed.) 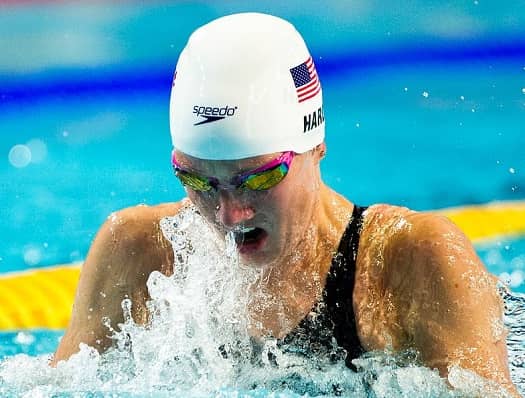 Hardy would later have her sentence reduced to a year when she was able to show that the positive test was a result of a contaminated supplement she had been taking. In the ruling, the American Arbitration Association found that the supplement makers had made assurances of the product’s purity, and that the positive test had been a result the supplement, Advocare Arginine Extreme (a pre-workout), being contaminated.

Advocare even had Hardy and the products she was using on their website as one of their “endorsers.” This was quickly removed in the weeks following her positive test.

Irvine Novaquatics swimmer Kicker Vencill was suspended for two years at the beginning of 2003, missing the Pan Am Games that summer and Olympic Trials the following year, after ingesting a contaminated multi-vitamin.

This particular supplement, Ultimate Nutrition Super Complete (what is with the names of these products…), when tested later was found to contain three different steroid precursors. Vencill would successfully sue the makers of the supplement, getting just under $600,000 in damages in 2005.

Vencill kept swimming, returning to the pool at US nationals in Irvine after serving his suspension. “I wanted to prove something,” he said. “I wanted to show that I wouldn’t quit, not even after two years of living hell.”

Despite his return, the stigma of that positive test was hard to wash off.

“I would step on the deck and I would feel people were boring holes through me,” he said.

Cooking in the dark

Supplement makers are generally not the best when it comes to quality control. Although unintentional doping tests happen infrequently (think of the thousands and thousands of athletes who are tested weekly across all sports and the billions of dollars in supplements taken annually) would suggest that supplement contamination is a one-in-a-million kind of situation, that is not the case.

One meta-analysis took a group of 23 studies whose mission was to identify illicit substances in supplements. A staggering 12-58% of dietary supplements from the studies included substances that were banned by WADA. (study)

Yes, read that again and let it absorb into your brain: Rates of contamination varied from 12–58% in supplements tested. If that doesn’t scare the chlorine out of your shorts I don’t know what would.

I’m not naïve enough to believe that supplements are going away any time soon. Especially when there is the promise of a better performance in a scoop. And there’s clearly a place for them in specific situations.

But you have to be aware of what you are putting into your body. It’s clear that the producers of these supplements generally don’t give a chlorinated backstroke flag about what happens to the end user. For the makers of supplements they want the best of both worlds: to market to elite athletes and produce their stuff in a sub-standard manner.

“Not knowing” also won’t fly. Ingesting a tainted supplement might not get you the full 4-year sentence that comes with getting busted with a needle hanging from your butt, but as the story of Kicker Vencill illustrates, once you are labeled as a doper the stink is almost impossible to wash off no matter how much money you win in damages.

The anti-doping and governing bodies are also skeptical of initial explanations of unintentional doping, as the policy of strict liability tells swimmers that they are responsible for what’s in their bodies, no matter how it gets there.

We can blame poor quality control and lack of regulation all we want, but reasonable efforts have to be made on your end to make sure that you aren’t the one holding a positive drug test at the end of your next competition.

The key thing to remember?

You can’t out-supplement poor effort. Supplements aren’t somehow going to make up for poor attendance, low levels of focus in training, make you mentally tougher or magically improve your technique.

Take a step back and view the word “supplement” for what it is—something that should be considered once you are crushing the things that will truly make a difference to your performance in the pool. There’s no powder on earth that is going to make up for soft commitment, no matter how Xtreme the label or extravagant the gainz that are promised.

Here are some resources for swimmers and supplements:

USA Swimming’s Doping Control. The governing body for American swimming has a list of resources for swimmers, coaches and parents to better inform what’s expected of chlorinated athletes.

NSF Certified for Sport. NSF International is an organization that tests supplements to see if what’s on the label is in the bottle. They also have an app so you can scan a barcode the next time you are in your local supplement shop.

Informed Choice. Another third-party supplement testing service, they have a list of certified brands and products that you can search.

USADA Drug Reference Line. USADA runs a telephone line that you can call on weekdays to speak to an expert that will answer questions on supplements, drugs, and therapeutic use exemptions. They also run Supplement 411, an education and awareness resource on supplements.

Global DRO. The Global Drug Reference Online website gives athletes a run down on the status of various drugs and medications according to the current WADA prohibited list.