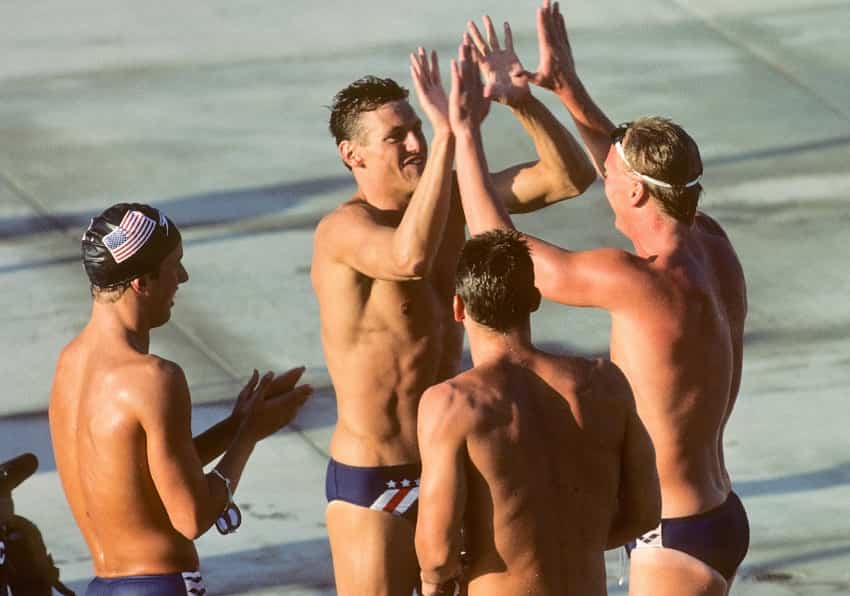 Swimming is much more than just winning medals and setting records. Jeff Float’s journey to Olympic gold in 1984 illustrates how the power of the sport is felt greatest in helping young people develop confidence and self-belief.

An upset is being written under the Southern California sun.

All eyes are on the middle of the pool, as Bruce Hayes of the United States and Michael Gross of West Germany are furiously going head to head.

But for right now, Jeff Float, the third leg of the American 4×200 free relay team, has gotten out of the pool, water beading off his face, soaking in something that he’s never heard before at a swim meet.

The unmistakable sound of cheering.

Not usually fatal, this particular case of meningitis runs through Float, nearly killing him. He loses most of his hearing on the left side, and almost all of it on the right side. Legally, he is deaf. As the young Float grows, he wears hearing aids, learns to read lips, and with his lisp is often an easy target at school.

“Kids would boost their self-esteem by putting me down,” Float reflects.

He finds refuge in the pool, getting his first taste of the water at the legendary Arden Hills Swim Club. Other swimmers at the pool, led by coach Sherm Chavoor, include Debbie Meyer, Mike Burton, and Mark Spitz.

In the water, Float is able to develop a degree of self-belief and confidence.

Given his name, he notes that he didn’t have much a choice.

“My name isn’t Field or Court. It’s Float—I had to swim.”

Float attends the University of Southern California, where he is a 6-time All-American. At the age of 20, the big prize looms—the Olympics, and a chance for gold, just like his idols, the swimmers he trained with back at Arden Hills.

At Trials, Float punches his ticket to the 1980 Summer Olympics in three individual events. His prospects for a solid medal haul—when you add relays—are significant.

But then, a whole bunch of nope.

President Jimmy Carter announces the Americans—and many of their western allies—will be boycotting the Moscow Games to protest the Russian invasion of Afghanistan.

For Float and a full generation of athletes, the Olympic dream in 1980 has been extinguished.

Float, now 24-years old, and elected team captain of the team in Los Angeles, has completed the third leg of the 4×200 free relay. He joins his teammates Mike Heath and David Larson behind the block.

In the water, the American anchor Bruce Hayes is battling with West Germany’s Gross. The heavily favored Gross—also the world record holder in the 200m freestyle—has lurched ahead of Hayes and looks to be cruising to an easy gold.

But Hayes claws back, and does the unthinkable, passing Gross over the final 50 metres to win at the wall. It’s pandemonium in the stands, behind the blocks, and in every corner of America.

The world record has been shattered by over three seconds, one of the craziest upsets in Olympic swimming history has been written, and Jeff Float has become the first legally deaf American to win gold at the Olympics.

The roar of the crowd is something completely new to Float.

“It was the first time I remember hearing distinctive cheers at a meet,” Float said. “I’ll never forget what 17,000 screaming people sound like. It was incredible.”

Swimming does a lot of things for those of us who call it our own.

For Float, the pool was a refuge. The hearing aids, lisp, the bullying—they were forgotten.

Those things simply don’t matter when it’s just you and the water.

Swimming was where Float could test himself, push limits, safely navigate failure, and develop the kind of formidable spirit that would help him become an Olympic champion.

“Swimming gave me the self-confidence I couldn’t find anywhere else,” said Float.

Olympian Mike Burton and the “Fast 66”: How Hard Work in the Pool Defines What’s Possible. Swimmers are prisoners of what they think is possible. Here’s a lesson in how hard work in the pool helps you to redefine what you are capable of in the water.

Rowdy Gaines: The Importance of Swimming Regret-Free. After the 1980 boycott came down, Rowdy Gaines, favored to win a bunch of gold medals in 1980, considered leaving the sport. The nagging question of “what if?” brought him back.