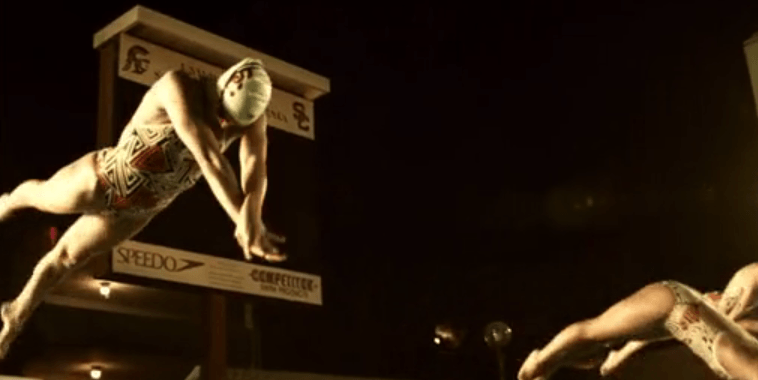 The University of Southern California is known for a few things, including having a legendary film & television program (USC School of Cinematic Arts), as well as their Dave Salo-led swim program, which has pumped out some of the fastest swimmers in the world over the past few years, including Russian lightning-bolt Vlad Morozov.

The combination of those two aspects of USC’s downtown LA campus make conditions for the creation of the following video optimal. The video was produced by Van Wagner Big Screen Network, who create in-stadium video promos for numerous professional sporting teams across North America, as well as the past 29 Super Bowls and five Olympics.

The video itself juxtaposes shots of gladiators with action shots of swimmers and divers, all surrounded by a crashing musical score that comes straight out of Hollywood.

USC also recently underwent some renovations at the McDonald’s Swim Stadium (henceforth known as Uytengsu Aquatics Center after ’83 grad and former team captain Peter Uytengsu donated $8 million towards renovation costs), spending $16 million on revamping the old aquatic center. Improvements included to the scoreboard, which means that the promotional video will be shown in sparkling HD.