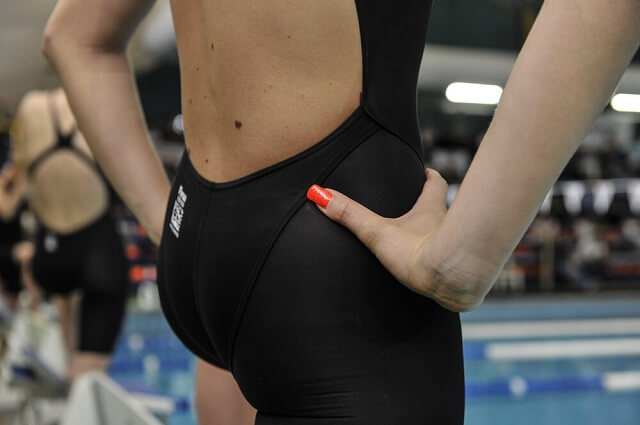 Swimmers pride themselves on having legendary work ethics. We take satisfaction in knowing that our workload—even as young athletes—far exceeds that which is typical of other major sports.

From the early morning workouts, to the punishing weeks of training during the holidays, and the towering number of meters and yards swum over the course of our training we work hard.

So hard, in fact, that it would seem to make sense that swimmers get injured a whole lot.

If you go to any swimming website and read through the comments you’ll see more than our fair share of armchair therapists warning about overuse injuries and spouting tales of career-ending tendinitis. 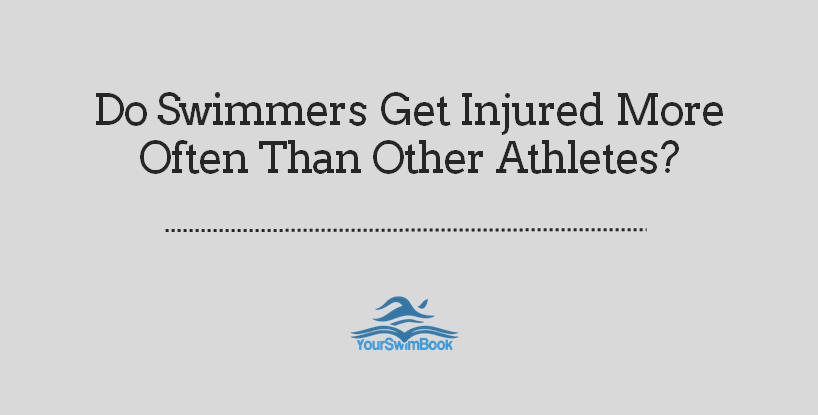 As someone who spent a majority of time during my later teenage years sidelined with chronic shoulder injuries I know that swimming can be a cause of infuriating, serious, and painful injury. Things like swim paddles, spending lots of time on a kickboard, and overhead shoulder movements would only further aggravate the problem.

But personal experience aside, do swimmers in general get injured more often than other athletes?

There is no shortage of research on injury in sport, and swimming is no exception. Although the numbers vary with the studies outlined below, you can get a broad sense of how often injury happens in the water.

An Australian study followed 5 different clubs over a 12 month period, with 74 swimmers participating in a self-reported study.

38% of swimmers reported missing training at one point or another due to shoulder injury. 22% had injuries that lasted longer than two weeks. Injury rates ranged from 0.2 to 0.3 per 1000 km.

No matter how you dice it up those injuries can cause some serious havoc on a team’s program.

A separate study done with over 265 Danish swimmers found an injury rate of 0.9% per 1,000 hours of swimming. The shoulder led the way, with the back also commonly cited. Breaststrokers were much more likely to have knee injuries, and the fastest swimmers in the study experienced injury significantly more often (added training, perhaps?).

How Do Swimmers Get Injured?

In a study done with the University of Iowa men’s and women’s team (cited later), five years of monitoring found swimmers were most likely to get injured in the following ways:

While breaststrokers didn’t suffer as much in the shoulder department, they were certainly not immune to injury with increased injuries in the knee and hip areas:

How Often Do Swimmers Get Injured Compared to Other Athletes?

Okay, so common sense and personal experience tells us that swimming carries an increased risk of suffering shoulder, neck/back and knee injury.

(Not too mention stubbed fingers, paddle slaps and so on, but that is for a different time.)

Chronicling five years of training history for an NCAA division 1 program at the University of Iowa researchers found the following injury rates for collegiate swimmers:

These stats can be misleading given that it only tracked one program—and their individualized approach to training isn’t necessarily a blanket generalization for all swim teams and programs—over a 5 year period.

That being said, it provides us with a number to measure up against other sports.

Below is where swimming falls when compared to other NCAA division 1 sports averaged out over a 15 year period. 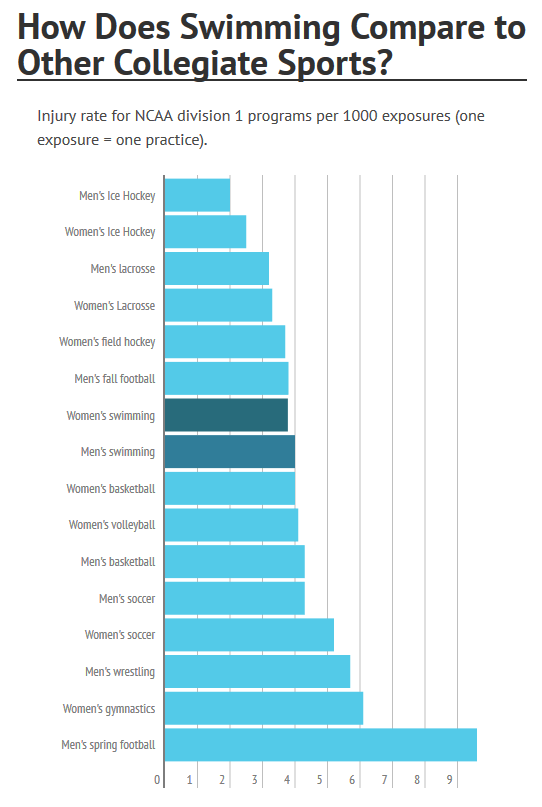 In terms of swimming being a worse offender for promoting injury than other sports, that doesn’t look like it is the case.

And to be honest, the injury rates for swimmers could and should be able to be dramatically reduced.

After all, we only have our own performance to worry about, we don’t have have people trying to mow us over as in football, or someone else’s ankle to roll over in basketball, or a landing to try and stick from height as in gymnastics.

(Although we do have to tend with the breaststroker’s foot from the next lane, smashing into the lane rope, and so on, but really…)

With a good background of pre-hab, having good posture both in and out of the water, and swimming with proper technique consistently and especially during times of difficult training, swimmers should be able to avoid the injury bug.

For more information on swimmer’s shoulder and swimming injuries, check out some of the following resources:

How to Prevent Swimmer’s Shoulder. A guide we put together recently featuring biomechanists, therapists and chiropractors, and even a space scientist (seriously). Everything you need to know about avoiding swimmer’s shoulder.

The 1 Thing Every College Freshman Swimmer Needs to Know. First year swimmers at university are much more likely to be injured over the course of the season than their teammates. This post discusses why, and outlines some solutions for preparing for that freshman year.

The Psychological Toll of Being Injured All of the Time. When injury does happen, the resulting fallout is more than just physical. Feelings of frustration, anger and even depression are common in athletes struggling to get past injury. Here are some ideas for how to make it through your time on the sidelines.

Weight Training for Swimmers: A Letter from Your Strength Coach. Whether it is your first time in the gym or you are a returning vet, some of the top strength coaches from elite NCAA programs stop by to kick some knowledge for swimmers in the weight room.