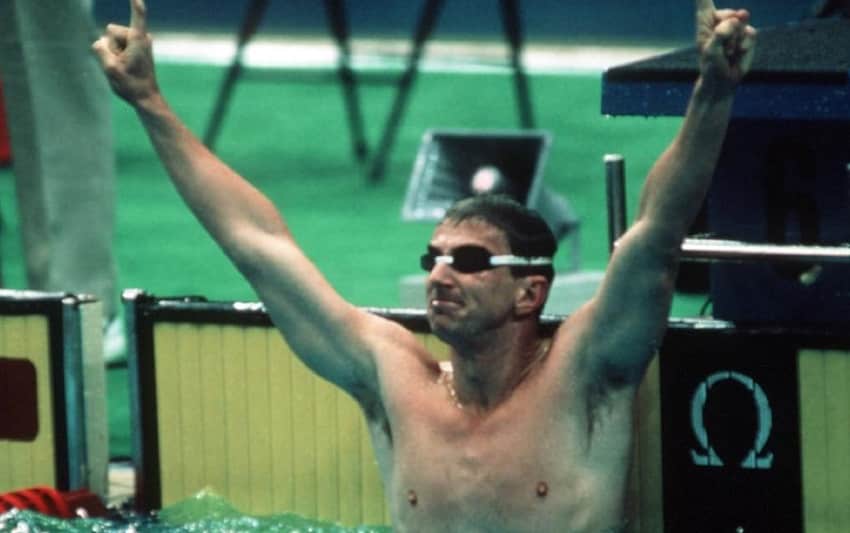 Duncan Armstrong was having the meet of his life at the 1986 Commonwealth Games. The 18-year old Australian had won two gold medals. His coach, the legendary Laurie Lawrence, pulled Armstrong aside at the end of the meet, being held in Edinburgh, Scotland.

“Are you happy with that?” asked Lawrence.

Armstrong replied that yeah, he was happy. Lawrence pushed—what would make the young swimmer ultimately satisfied in the sport? Well, replied Armstrong. Winning a medal at the Seoul Olympics, being held two years later, would be great.

Over the next two years Armstrong was a monster in training.

Lawrence’s philosophy was old-school and simple: they would outwork and out-prepare the competition. This meant Armstrong regularly did 20,000m a day in the water. When Lawrence learned that the swimmers would be walking a few kilometers a day between the pool, accommodations and the athlete’s village in Seoul, he added 6 kilometer runs to their training regimen.

“Laurie manufactured tension on a daily basis,” Armstrong said. “It was antagonistic, eyeball-to-eyeball stuff that toughened you up for competition.”

Lawrence’s coaching style was in-your-face, but it was endlessly energetic. Something that Armstrong recognized as being key to his ability to endure the tough training that developed him into a champion.

The competition Armstrong would face in Seoul were two of the great swimmers of the 1980’s.

West German Michael Gross had been the star of the Los Angeles Games, and American Matt Biondi was projected to match Mark Spitz’ record-setting haul of seven gold medals in Seoul. The two were also giants in the literal sense, Gross at 6’6 and Biondi at 6’7, towering over Armstrong at 6’0.

Lawrence had done some recon of Biondi’s swimming and noticed that the wave that followed the American was massive. With the skinny lane ropes and the big wake Armstrong could hitch a free ride, conserving his energy for the back-half of the race.

With the preparation completed, and a race strategy in place, Armstrong stood up for the final of the 200m freestyle in Seoul believing that he belonged there and that these legends of the sport were beatable.

“You look down your lane and know you’ve done everything you possibly can and you’re prepared for this race. Someone has got to win it. Why not me?”

Armstrong dove into the water and immediately locked on to Biondi’s hip as the “California Condor”—so named for his nearly seven foot wide wingspan—surged out to an early lead.

In the stands Lawrence was pacing manically, a heat sheet rolled up tightly in his fist. Biondi used his big arm-span and early speed to turn in the lead with Sweden’s Anders Holmertz out in lane 8, with Armstrong tagging along, half a body length behind.

The Australian turned third at the 150m and made his move, swimming off the lane line. By the time they hit 175m, Armstrong had surged into a clear lead. He sailed into the wall, crashing in a flurry of white water in a time of 1:47.25.

Up in the stands Lawrence was going bananas.

This was the second Olympics in a row he’d coached a swimmer to gold from lane six. Four years earlier at the Los Angeles Games Jon Sieben had won the 200m butterfly, upsetting the favored Gross to win gold. Just like Armstrong had. “Lucky lane 6!” the coach bellowed from the stands in Seoul.

When a reporter tried to pin down the erupting Lawrence for a quick interview, the coach’s response was classic Lawrence. “Mate, we just beat three world record holders! How do you think I feel? What do you think we come for, mate? Silver? Stuff the silver! We come for the gold!”

Laurie Lawrence believed that with enough hard work and self-belief that anything was possible. Height didn’t matter, past performances didn’t matter. Lawrence’s enthusiasm and unwavering belief in his swimmers was infectious and infused them with the idea that they could be world-beaters.

The recipe for success is as simple as it is timeless: good things happen when you enthusiastically do it better and harder than the swimmer in the next lane. The physical preparation will sculpt you into a faster swimmer, and enduring and conquering the training will give you the confidence to believe that you can beat the Biondis and the Gross’ of the world.

Does this mean you should go to the pool and start dropping 20,000m days of training? Running six kilometers a day too? Not necessarily.

Don’t be afraid of dreaming big.

We all need a little more of that.

Just make sure that when you dream big you are willing to prepare and train bigger.

How to Stop Overthinking and Swim Fast. At some point most swimmers have suffered the ill effects of overthinking. It’s been shown to ruin our best intentions and performances with ease. Here’s how to stop overthinking in the pool.