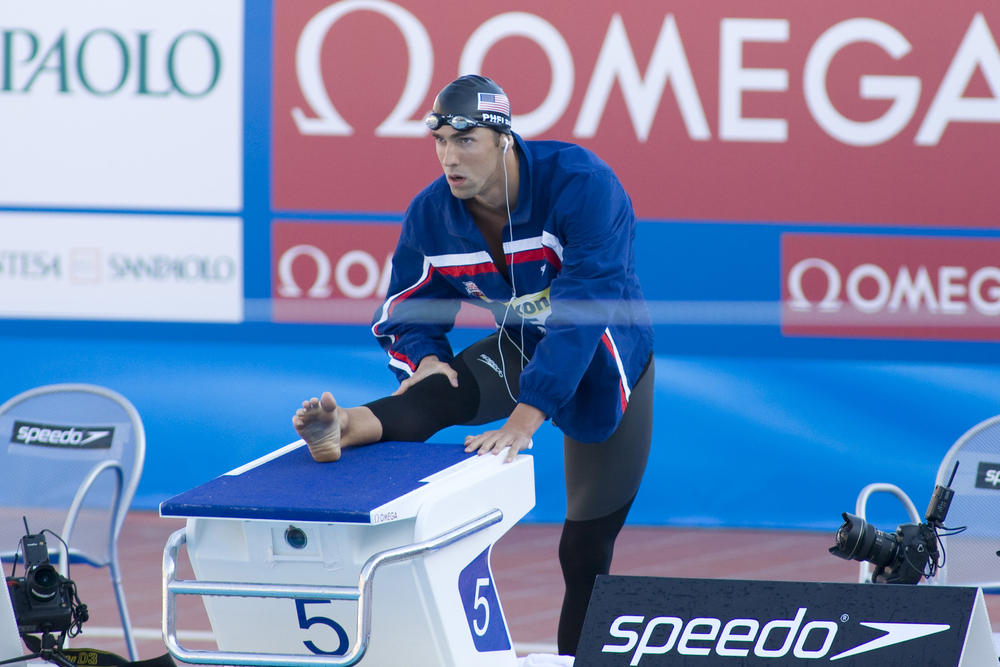 With Phelps return to competition less than a week away, there has been a flurry of interest and speculation over Phelps comeback, guessing as to his motivations for coming back, and equal parts enthusiasm as dismay.

His legacy will be tarnished. He’s too old. Obviously he is missing something in his personal life is he has to come back to swimming. Let the younger kids get their turn. Blah blah blah.

The same was said after Beijing on the road to London. We all knew that he wouldn’t be able to replicate his 8 gold medal performance in 2012, and why would he? Been there, done that. When he placed 4th at the London Games in the 400m IM on the first night of competition it was decided that he was over the hill, past his prime, backseat to a clearly more worthy challenger in Ryan Lochte. (Of course, his 100m fly and 200m IM wins would silent that discussion.)

It’s no surprise that his comeback has been compared to that of another Michael, that being of the Jordan variety. Jordan came back numerous times, after also promising that once he retired the first time that would be it. Jordan also publicly stated that he had no interest in competing as an aged athlete, past his prime where he couldn’t perform at his very best. (It’s no surprise that Phelps statement was similar to Jordan’s initial retirement epitaph; Jordan was Phelps’ hero growing up as a kid in Baltimore.)

THE AGE QUESTION (WHY IS THERE ONE, AGAIN?)

But unlike Jordan, who unretired for the last time in his 40’s, Phelps is only 28 years old. Yes, “only.”

According to the youth-obsessed dogma of swimming “experts” this is too old, too over the hill, too out of the game. Bullcrap. Take a look at professional athletes across the major sports who compete well into their 30’s. Of note in particular are sports like football, mixed martial arts and hockey, which outside of the requirements of speed, agility and power, are also rapt with injuries and punishing impacts that are not prevalent in swimming. In other words, the low impact nature of the sport lends itself to swimmers being able to have increased longevity.

So despite the trend of swimmers getting older and swimming later, why has swimming been so late to the party?

The main reason that swimmers don’t compete into their late 20’s and early 30’s is because the financial backing simply isn’t there. It’s not necessarily a young man or young woman’s sport because swimmers are only proficient at a young age, it is a sport for youth simply because there is no financial incentive for an athlete to swim past their college years.

At an age where most people are thinking about buying a home and starting a family, it is understandable that swimmers are eager to forgo the life of being a broke amateur athlete in favour of making money and building a life outside of the pool.

For Phelps, he has the rare opportunity to do both; develop a life outside of the pool in terms of building his brand and empire (including expanding his lucrative sponsorship portfolio while also indulging in the benefits of celebrity-dom by guest spotting on his favorite television shows), and competing and training in the sport that he loves.

MOVE ASIDE FOR THE NEXT GENERATION

As for the youngsters, the up-and-comers, who supposedly deserve their chance to shine, the answer is simple: swim faster.

After all, that’s what Phelps did. He didn’t ask Tom Malchow, former world record holder in the 200m butterfly to step aside when an upstart Phelps was 15 years old. He earned his chance, and a year later sent Malchow’s WR back into the annals of swimming history.

If the young up and comers want to shine, they should have to earn it.

PHELPS IS TO SWIMMING AS TIGER WOODS IS TO GOLF

The reality is this: Phelps coming back has sparked a massive interest in the sport of swimming. The Mesa Grand Prix, the first meet slated for Phelps to compete at, sold out within 24 hours of the announcement. The competition is a second-tier meet on the swimming calendar, but it has suddenly become the must-watch event of 2014 for swimming fans and swimmers alike.

The impact has been felt internationally as well. Sportsnet, one of the major sports networks up here in Canada, took a break from the 24-hour, wall-to-wall coverage of the NHL playoffs to let viewers know that the Phelps comeback tour was to kick off in Arizona next week. In a skates-and-sticks obsessed culture that is no small feat, and is a testament to the star wattage that Phelps carries, something that is completely unique to our sport. Lochte made an awkward and stunted attempt at crossing over into the mainstream with his reality show last year, and young stars like Missy Franklin and Katie Ledecky have attracted huge attention within the swimming community, but little traction outside of it. Even though Ledecky swam out of her mind last summer in Barcelona, dropping some crazy times in the 400-800-1500 freestyles, it hardly made for international news.

Phelps deciding to swim three sprint events, on the other hand, has.

For those who bemoan swimming not getting enough attention amongst the plethora of sports, rejoice.

BUT WHAT ABOUT HIS LEGACY?

Most winning Olympian ever. Most dominant swimmer in history. First swimmer to truly cross over into the mainstream.

Those facts won’t change. And if anything, Phelps will only add to his medal counts over the next couple years, and more importantly, broaden the reach and appeal of the sport unlike anyone who has come before him.

Instead of judging someone else’s choice to compete at the thing he loves (and does amazingly well), sit back, grab a chilling beverage, and enjoy the next chapter in Phelps’ historic career.