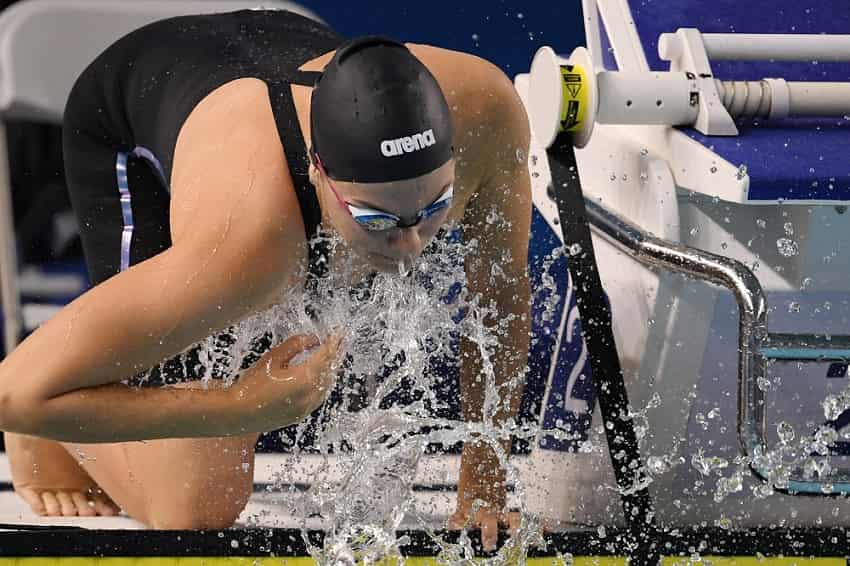 Find yourself overthinking behind the blocks? Try this simple trick to make sure that your swim stays “automatic.”

The pressure and anxiety of competition does weird stuff to swimmers.

During the weeks and months of training we are confident in our ability and sure about our technique. But then as the race approaches, the pressure goes up, the nerves start to rise, and that confidence starts to tumble.

To battle back against the nerves, some swimmers will try to think through the race.

The reasoning goes, if I just think harder about how much I want to perform well, if I just think the hardest about my technique, my start, turn, obsess over race strategy, the performance of other swimmers, that by dropping an overthink bomb on my swimming I will perform the way I want.

But if you’ve ever tried to do things this way, you know it doesn’t work.

Overthinking chips away at our performance by stressing us out and mentally bulldozing well-rehearsed movements that have largely become automatic.

The moment we start doing this, well, our speed, technique, and everything we have worked so hard to develop fall apart like a rotting pull buoy.

Overthinking reveals an infuriating paradox: in order to perform your best, you need to turn your brain off.

Think back to the last time you swam like a certified boss. What was your mindset? It was clear-headed. Quietly confident. You weren’t overthinking your technique. You probably barely remember the race. You got into that weird sense of “flow” and barely had to think about what you were doing in the water. You just did it.

Performing your best under pressure requires that you are able to quiet down the part of the brain that is prone to launching you head-first into overthink-mode.

One neat-o study out of the University of Munich [1] found a super simple way to do just that.

Squeeze a ball to stop yourself from overthinking

The goal of practice, all those endless number of meters and yards, is to build a performance. Technique and speed are honed and refined in swim practice so that you get up on the block and let it fly.

But when you start focusing too much on your movement or technique, we become susceptible to big drops in performance. You know, choking.  The experience is probably familiar—the time we drop in competition is barely faster or even slower than some of the times we were doing in the midst of heavy training in practice.

Researchers at the University of Munich looked to see if there was a way to prime the right side of the brain, which is responsible for automatic behaviors.

The researchers took three group of athletes and had them squeeze a ball in their left hand before performing a penalty kick, a badminton serve, or kick a sandbag as fast and as accurately as possible.

Why the left hand?

Because left-handed activities and muscle contractions have been shown to light up the right hemisphere of the brain, the researchers figured the simple act of having the athletes squeeze a ball in their left hand would help keep things automatic.

The athletes were then tested in low pressure and high-pressure situations.

All athletes, regardless of sport, performed worse in the high-pressure conditions. They choked. The soccer players, for example, scored 24.33 in the practice scenario and 21.93 under pressure.

But after giving the ball a few squeezes, their high-pressure scores jumped, going from 25.64 in practice to 25.50 in the competitive scenario.

The athletes all reported feeling less anxious after squeezing the ball in their left hand versus the control setting of squeezing it in their right hand.

Whether it was because the right-side of the brain was activated, or because the deliberation of the left side was suppressed, the performance of the athletes improved markedly under pressure by squeezing the ball in their left hand.

(Note: The study was done with right-side dominant athletes.)

Add it to your pre-race routine

Do you have a little plan that is uniquely yours when you head off for competition?

If you find yourself struggling with overthinking when you are standing behind the block, or even in the moments before a hard set at practice, give your left hand a few squeezes and let that glorious technique of yours take over.