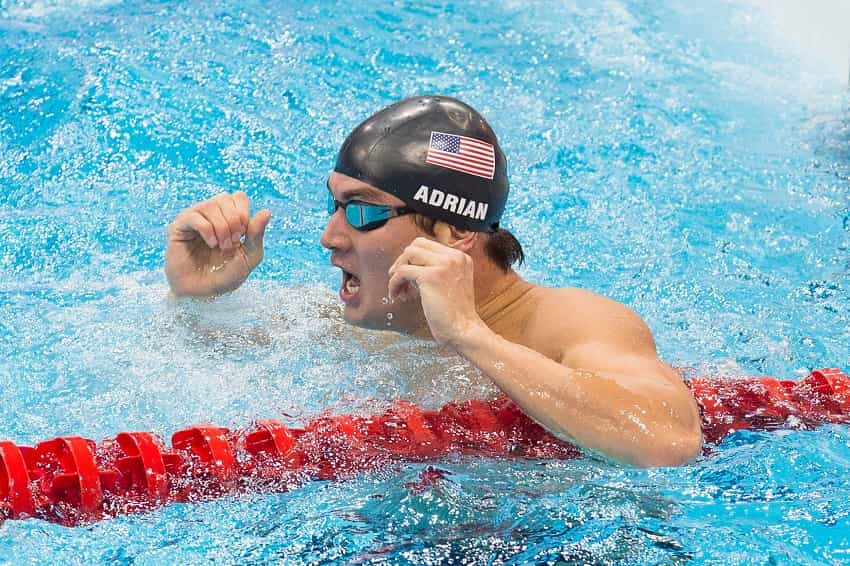 There is no shortage of ways to measure ourselves when it comes to our swimming.

Our personal best times are usually the biggie.

But so is the inevitable comparison-making that we make against other swimmers.

While using others to motivate you is one thing (Michael Phelps was great at this—if someone beat him it lit a fire under his belly; a lot of other elite swimmers have this losing-makes-me-so-mad-that-it-motivates-me attitude, too), comparison-making isn’t all rage-fueled motivation.

Far too often it leaves us feeling less-than. Unmotivated. Like our confidence is shattered.

Some of comparison-making’s chart toppers include:

(That last one is past-self comparison making, and it’s a kind of comparison-making that is particularly sneaky and ouchie.)

The bad kind of comparison-making that is sucky. It leaves us feeling deflated, a little helpless, and certainly unmotivated.

And that whole self-confidence thing?

The approach we take when it comes to making comparisons is that our, err, approach is typically flawed, irrational and biased.

For example, we will generally take somebody else’s “best” and compare it to our worst.

Here’s a quick story to illustrate what I mean with a couple big name swimmers you will recognize.

It’s 2011, and Cal swimming head coach Dave Durden and strength and conditioning coach Nick Folker are helping two of the fastest swimmers on the planet get ready for US Olympic Trials.

Nathan Adrian is finishing up a disappointing 2011 and is hungry to make the Olympics in an individual event (he was a prelim relay swimmer on his first team in Beijing).

Anthony Ervin, on the other hand, is coming off almost a decade of not training and looking to qualify for the US team 12 years after winning gold in the 50m freestyle at the Sydney Games in 2000.

The difference between the two athletes is staggering, both in appearance and conditioning.

Although they were both preparing for the same events, Folker acknowledges that they are two completely different animals:

“Nathan was your muscle car, a V8 Ford Mustang, while Tony was your Ferrari, a one-and-done and that was him for the day,” Folker said.

While training at the Olympic Training Center in Colorado Springs, the Berkeley boys were in the gym doing gym-y things like picking up heavy things and putting them back down.

Now, if you know anything about Adrian it’s that he’s hilariously consistent in international competition and a complete monster in the gym.

During this particular session Adrian takes two 160lb dumbbells and proceeds to bench press them.

A couple benches over we got Ervin, watching two cartoonish-looking dumbbells being jacked into the air (each of which represent his total body weight, by the way), whose stability and strength is at a point where he shakes when he is in the “take your marks” position on the blocks.

According to Folker, Ervin is quite reasonably deflated:

And who could blame Ervin for feeling this way?

The cards are already stacked against him. He’d been out of the water for so long. He was creeping up there in age. And there, in the next lane at practice every day was a swimmer who was putting up power-lifter numbers.

What Ervin did, what he only could do, with some help from Folker and Durden, was to focus on his own swimming. His own process.

Focus on what you need to perform

I get the tendency to get lost in what other swimmers are doing. Competitive swimming is a competitive endeavor, after all. We check out meet results, splits and rankings fervently to see where we stack up.

But if you are staring constantly at what the swimmer in the next lane is doing you are ignoring the things you can do. The things you are good at. The things that other swimmers look at you and compare themselves wishfully.

“We spent a lot of time with Tony going: this is what you need.  And it took a bit of time and a little bit of trust, but he wasn’t going to get huge strength gains,” says Folker.

Ervin would place fifth in London, and then four years at the Rio Olympics, at the age of 35, would win gold in the 50m freestyle.

When you catch yourself peering over into the other lane, or measuring yourself up against other swimmers, turn back to your process.

As cliché as it is, focus on what you can do to be your best today.

It’s all you can do.