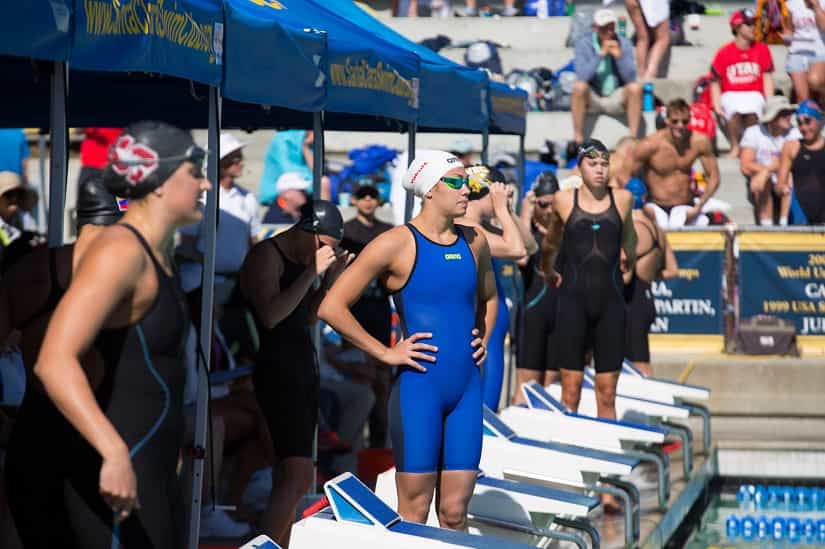 If it’s success you want in the pool, stop worrying about it and start focusing on this instead.

You see it hashtagged on Instagram, you hear it in post-game interviews from other sports, and it’s what your coach yells out across the pool deck when you are having a bad swim practice.

The NBA’s Philadelphia 76ers have made it part of their team identity as they rebuild, with fans and analysts touting that they were “trusting the process”—even as the team was consistently playing awful.

The phrase and philosophy are widely attributed to football coach Nick Saban, who developed his process of being, err, process-based with psychiatrist Dr. Lionel Rosen while Saban was a coach at Michigan State University.

Saban’s realization was simple—so simple that it disguises its power: instead of getting lost in the infinite number of variables that go into winning a football game, Saban would break down things into tiny, manageable chunks.

Instead of worrying about the score, or trying to achieve a specific result, each player and coach would focus only on executing the next play. The next drill. The next step.

Since then, Saban has become the most dominant coach in college football, winning five national championships in the past 15 years, first at LSU and now at Alabama.

On the way to LSU’s national championship in 2003, the pressure and expectations were growing. It was an opportunity for LSU to win their first national title since 1958. LSU would be facing Oklahoma in the Sugar Bowl, and during team meetings in the weeks leading up to the game, Saban relentlessly stressed a process-based approach when it comes to the mindset of his players:

Every time you think of winning the national championship—stop. Instead, think of what you have to do to dominate your opponent for sixty minutes.

How Good Do You Want to Be? by Nick Saban (Amazon)

When LSU beat the Sooners to become national champions, Saban reflected (emphasis mine):

In my three decades of coaching, I’ve learned that the process is much more important than the result.

This attitude echoes that of legendary NFL coach Bill Walsh, who coached the San Francisco 49ers to multiple Super Bowl wins in the 1990s. He detailed his approach to step-by-step excellence in his seminal book on leadership, The Score Takes Care of Itself (Amazon).

He was ruthless in instituting a standard of performance that promoted excellence in every area of the organization, from the route running to how the practice helmets were treated.

They didn’t achieve success by sitting down and focusing on winning a Super Bowl. They turned inwards and mastered every aspect of their own process, knowing that doing this would eventually create the results they wanted.

The 49ers went from a 2-14 football team to the dominant franchise of the 1990s, winning the Super Bowl four times, turning Montana, Rice, and Lott into the household names they are today. 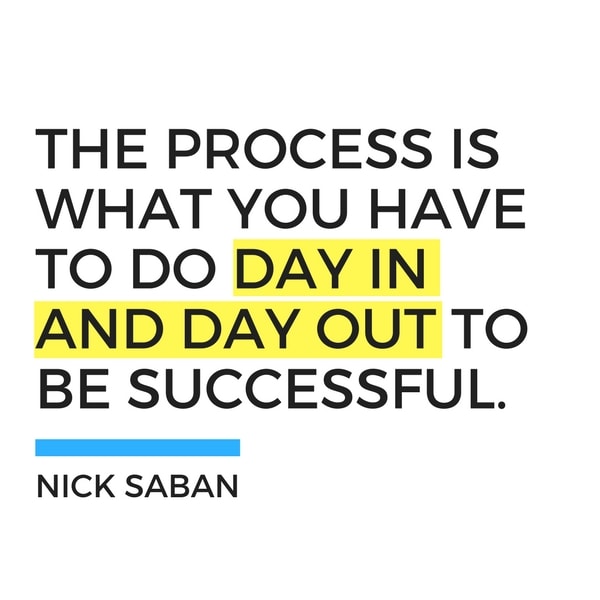 The Process on the Pool Deck

This attitude and approach has become prevalent around the edges of the pool as well.

Bob Bowman, Michael Phelps’ long-time coach, has brought this focus on the process to Arizona State University. “That man has the plan,” said ASU recruit Grant House, nodding towards Bowman’s office. “Every day, we have to trust the process and perform the best we can.”

Nathan Adrian, perhaps the most consistent male sprinter on the planet over the past decade, has a very process-based approach when it comes to goal setting and his training.

Kylie Masse, Canadian backstroke sensation who won bronze in Rio, and then followed that up with a world record in the 100m backstroke at the 2017 Budapest World Championships, “Everyone has what works for them. I try to always keep a positive attitude. I trust the process, my coaches and support systems.”

Masse’s coach at the University of Toronto, Byron MacDonald—himself an Olympic finalist at the 1972 Games—echoed Masse’s ability to stay present with her training and racing: “A lot of people worry about the outcome and she just focuses on the process and likes to challenge herself.” 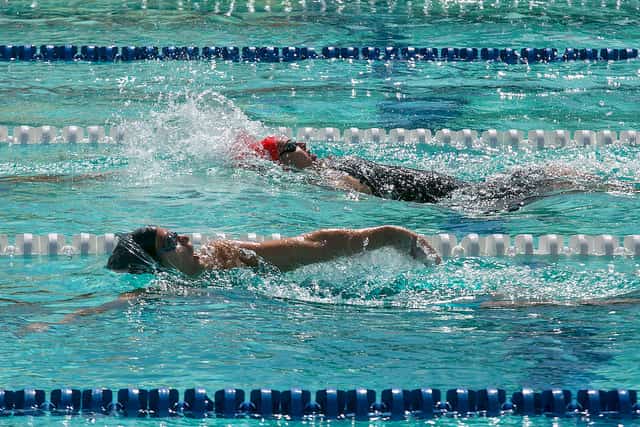 For swimmers who are tapering trusting the process is especially critical: it is natural—with all that surplus of energy—to start thinking about adding some last minute training, or start to feel rampant doubt. We start worrying more about performing than we do about showing up to the pool and doing our best today.

University of Notre Dame swimmer Rob Whitacre, when discussing the mental aspect of tapering noted the importance of staying the course and having faith in what you are doing: “But it’s just trust the process, you’ve been doing the sets the coaches tell you to do all year. Why would you question that process now?”

The phrase also figures prominently in my mental training workbook for swimmers, Conquer the Pool, with a section devoted exclusively to grasping and mastering the process.

So, even though the phrase gets thrown around a lot, what can you, the enterprising swimmer do with it?

How can a “trust the process” mindset help you become a better swimmer?

The Process Helps You Do What Needs Doing

For a moment lean back and think about all the work you need to do in order to crush your PB at the end of the season.

Are you sighing yet? Feeling a little overwhelmed? Paralyzed even—like, “How can I possibly do all that stuff?”

That’s a natural reaction when we try to swallow our big goal with one bite.

Cognitively, trying to digest a year (or four) of hard work is a lot to handle. After all, swimming elite—whatever that means for you—is complex. It’s chaotic. There are a thousand different variables to consider each day in and out of the water.

This sense of being overwhelmed leaves us feeling stressed, anxious, and hammers performance.

By focusing on the process you zoom out from the big picture perspective that leaves us feeling stunned and paralyzed, and instead get up real close with what needs doing today.

Trusting and focusing on the process strips your goals down to the next lap and the next stroke.

This is the sneaky power of the process.

It gives us a way to clear the chaos and get some clarity of purpose. Something to latch onto when we feel overwhelmed with everything we still have to do to accomplish our goals. Breaks down something that is really, really hard and complex into something that is simple.

The process is being present, it’s swimming in the moment and not allowing ourselves to be distracted by what may or may not happen tomorrow, by the swimmer in the next lane, or by focusing on anything else outside of what you are doing right now.

It’s doing what you need to do.

Trusting the process is hard: It requires faith in an uncertainty. And that’s why so many athletes have a difficult time with it. Because there is no sure thing, we keep looking for something better, something shinier, something more effective than what we are doing, abandoning momentum and progress for the sake of novelty.

Trusting the process is tough: There will be times where you feel like it’s not working, not working fast enough, or it’s simply harder than you anticipated. Going full-blown process-based with your goals is not a turn-key solution to your motivational woes: it’s not as though you look in the mirror and say, “Trust the process!” and everything is smooth sailing. The process is tough because it requires you showing up and pushing failure each day in practice.

Trusting the process can be counter-intuitive. Focusing on today’s workout—and setting aside the anxiety that comes with stressing about our races—is supremely simple, but hard to do. For some swimmers, it seems ridiculous: the way to achieve my goals is to stop thinking about them? Yeah, basically. Worrying about your goals doesn’t increase the chances of them coming to pass. You already know this. And yet we do it anyway.

Trust the plan. There will be moments where your swimming seriously needs a course correction. You need to do something new. (Just one of the reasons we race: it gives us an excellent barometer of how our training is going.) There is no denying that there will be times where your swimming is broken and needs some serious TLC. But if you are jumping ship frequently, you aren’t giving yourself a chance to allow your training to pan out.

And the biggie—trusting the process means having trust in yourself. Being fearful that we won’t be okay if things don’t go our way is typical. But guess what—you’ve been through worse before. And you will persevere through future moments of adversity and pain. You were okay yesterday, and you will be okay tomorrow.

So how do we start training and competing with more of that sugary process in our swimming?

Go forth, and dominate your process.