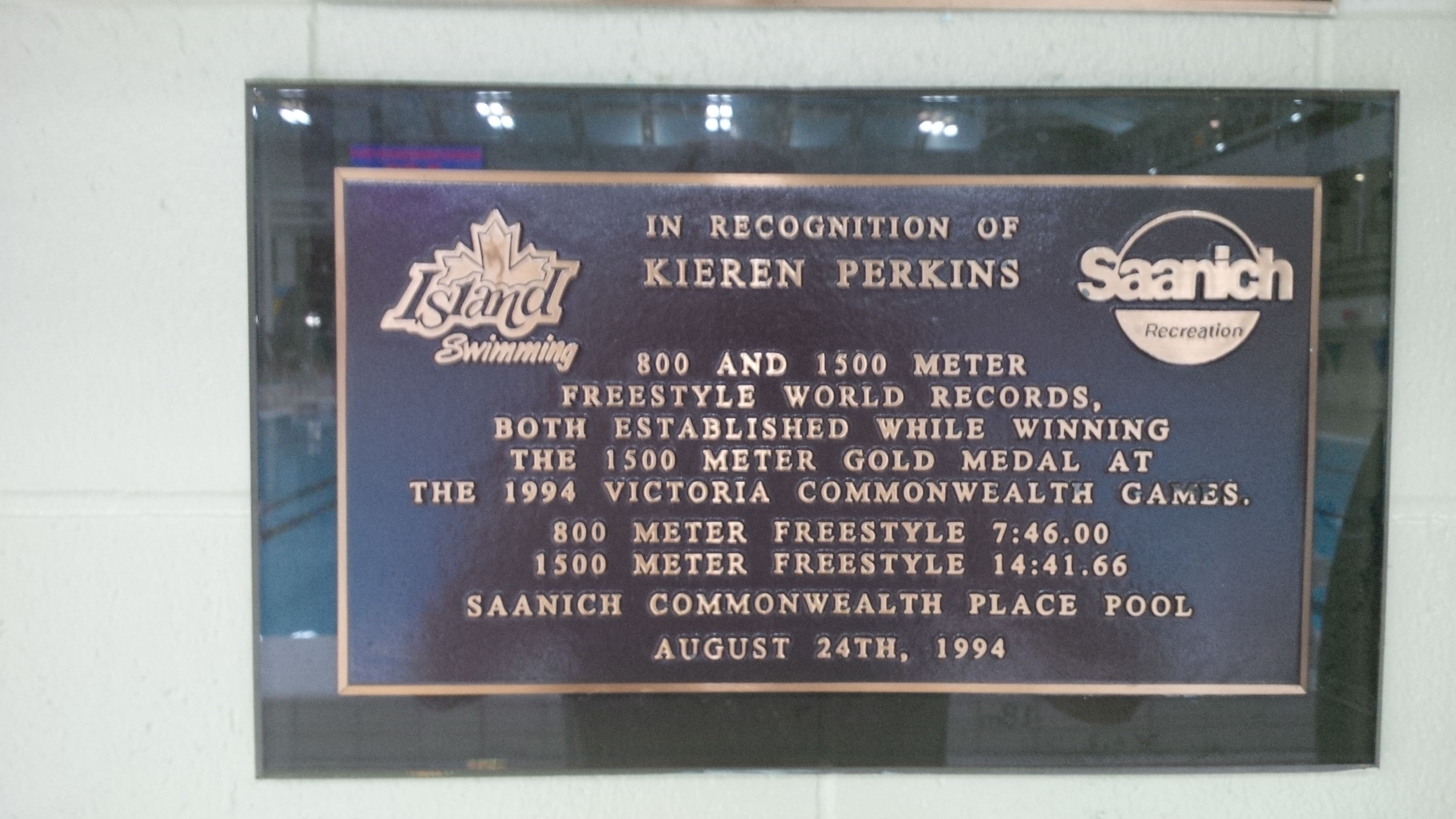 Tonight I went for a swim in the same lane, in the same pool that Kieren Perkins broke the 800m and 1500m world records at the Commonwealth Games in ‘94… in the same race.

THE DISTANCE STAR OF THE 90’S

His first international meet came at the age of 16 when he qualified for the Aussie squad heading to the Commonwealth Games in Auckland, New Zealand in 1990. At that meet he made history becoming only the third person ever to dip under the 15 minute barrier, and until then easily the youngest.

A year later Perkins would fire his opening salvo across the bow of international swimming when he took Germany’s Jorg Hoffman right down to the wire in the mile at World Champs. They were well below world record pace for the entire race, with the two swimmers going stroke for stroke. Hoffman would end up just out-touching the younger Perkins by two tenths of a second, Hoffman touching in 14:50.38 and Perkins in 14:50.58. Both athletes would devastate the world record, previously held by the incomparable Vladimir Salnikov of Russia.

Perkins would get his chance for payback in 1992 at the Barcelona Olympics. Although billed as a rematch, it wasn’t much of a fight, with Perkins stomping all over Hoffman’s record swimming a 14:43.48 to win gold, while Hoffman would finish 18 seconds behind.

While he would win the 1500m at both the Barcelona Games and the Atlanta Olympics – a swim that deserves its own post as he had a rough year leading up to ’96, barely made the team, and scraped into the final – his crowning meet was the 1994 Commonwealth Games in Victoria, British Columbia, Canada.

In every race he entered he either set a new Games Record or a a new World Record. In the case of the 1500 meter free, he would set two in one race.

At 800m Perkins turned at a 7:46.00, setting  a new world record. Prior to the race his coach John Carew asked him to go out and break the world mark in the 800 freestyle and subsequently  ease off and “swim to win.” Carew wanted him to save the best performance for the FINA World Championships a couple weeks later. After hitting that 800m mark, and feeling the thunderous noise from the crowd, Perkins made the decision to disobey his coach and chase down the 1500m mark as well.

[blockquote source=”Kieren Perkins”]By the time I got to the 1000-1100m mark I couldn’t feel a thing, my legs were like jelly but I kept it going, I knew I could get there, and you know when I hit the wall at 1500 metres I knew I’d broken it. It was one of the best feelings I’d ever had.[/blockquote]

Perkins, who demolished the field that included fellow distance stand-out Daniel Kowalski as well as Glen Housman, would touch in 14:41.66, lowering his own world record by 2 seconds that he set at the Barcelona Olympics two years later.

Hindsight would prove Perkins intelligent to have disobeyed Carew’s instructions, as that swim would hold up as his fastest swim ever, even quicker than what he would do in Rome at the World Championships a few weeks later. The time was fast enough to withstand 7 years of challenges by the best the world had to offer until it was finally bested by fellow Australian Grant Hackett in 2001.

In Rome, Perkins would destroy the 400 metre world record, swimming a 3:43.80, lowering the previous mark by 1.2 seconds, giving him back the 400m freestyle world record that Yevgeny Sadovi had taken at the Barcelona Games, giving Perkins the distance triple-crown of world records.

Below is video coverage of both the Commonwealth Games performance and his Rome 400 free, as well as interview footage with both him and coach John Carew–

(Commonwealth Games coverage starts at 16:35 into the video)