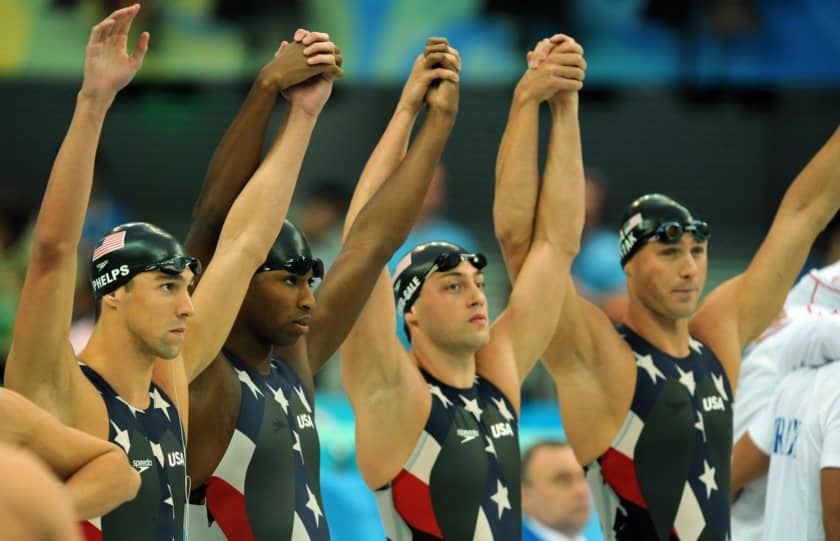 For Jason Lezak and the Americans the story-line couldn’t have been more perfect.

That summer in Beijing, on the first night of swimming events at the Water Cube it was shaping up to be an old fashioned battle royale between the sport’s biggest heavyweights.

The French, led by Alain Bernard, world record in the individual 100m freestyle, had been boasting in the lead up to the Olympics that they would “smash” the Americans.

The lead-off for the United States that night at finals would be Michael Phelps, who would need a gold medal if he hoped to best the record set by Mark Spitz of 7 gold medals in one games set way back in ’76.

A tense silence fell over the crowd as the finalists mounted the blocks.

The first leg of the race set the stage for what was to come. Phelps in lane 4 would take out in a blistering 47.51, setting a new American record.

However, it was Australia who had the lead behind Eamon Sullivan‘s world record setting swim of 47.24. The French, with Amaury Leveaux swimming a 47.9 was in hot pursuit.

Over the following two legs the French would catch and pass the Americans, with Frederick Bousquet‘s 46.63 on the third leg overtaking Cullen Jones.

As Bousquet came to the wall, the 6’5 Bernard awaited on the blocks, a comfortable lead in hand.

At this point, the race could have been over.

It should have been over.

Jason Lezak, with a 3/4 body length deficit leading into the anchor leg, was given the herculean task of catching the man who until 3 minutes earlier was fastest ever man in the 100m freestyle.

The Americans? We’re going to smash them. That’s what we came here for.

Lezak: Experience When Team USA Needed It Most

While Lezak was never an individual world record holder, he had placed prominently on international podiums in the 100m freestyle for nearly ten years leading into Beijing.

He’d been the American record holder in the event for a considerable amount of time, and was a veteran on the National team, with two previous Olympic appearances under his belt in 2000 in Sydney and 2004 in Athens.

(He would also make the 2012 team qualifying for the squad as an alternate on the 4×100 free relay.)

For the Americans, who had held a strangle-hold on this event for 7 straight Olympics until the South Africans and Australians won it in 2000 and 2004, it was an opportunity to reassert their dominance in men’s freestyle.

In a race that was so fast that two world records (the 4x100m freestyle relay world record was left in tatters) were beat, no one could have predicted the nail-biting tenor that it would take, with most analysts predicting a swift and decisive French victory.

Even Rowdy Gaines, generally the eternal Team USA optimist, didn’t see how the Americans could pull it off, and it wasn’t until his fellow color commentator noticed Lezak with about 30m to swim closing in on the big Frenchman did Gaines’ enthusiasm take a rapid U-turn.

One of the oldest swimming tactics in the book, drafting is the opportunity of one swimmer to brush up against the lane-line of a fellow competitor and hitch a ride on the swell that the leading swimmer is providing.

A little too far behind, and you are swimming in their wash. A little too close, and the effect is negated.

When Lezak dove into the water he emerged right at Bernard’s hip, putting him at a perfect distance to ride the massive rolling wake created by the Frenchman.

While Bernard churned his way down the first 50m of the final leg, Lezak quite literally hitched a free lift, putting himself into position to stage the unlikely comeback.

For all intents and purposes, it was over.

After all, nobody could predict what would happen next…

With 25m to go, Bernard began to tighten up, and Lezak was starting to cover some ground…

Until the two swimmers were nearly even coming in under the flags.

With Phelps and teammate Garrett Weber-Gale on the blocks screaming Lezak on, the 32 year old barreled into the finish, just barely surging past the hulking Frenchman to win gold, touching off a firestorm of celebration behind the US blocks (eventually also including a visibly drained Jones).

An absolutely insane 46.06, easily the fastest relay split ever.

How Team USA split the relay:

Below is the video of the race. It is still difficult to fathom the distance that he made up to win gold.

How to Set Goals Like Michael Phelps. The greatest swimmer of all time has set and achieved some of the biggest goals our sport has to offer. Here is a background to how he sets goals, and how you can apply it to your own goals in the pool.

How to Swim Faster Freestyle. While these tips might not guarantee you a 46.0 100m freestyle leg, they will help you get a little bit more from your freestyle.