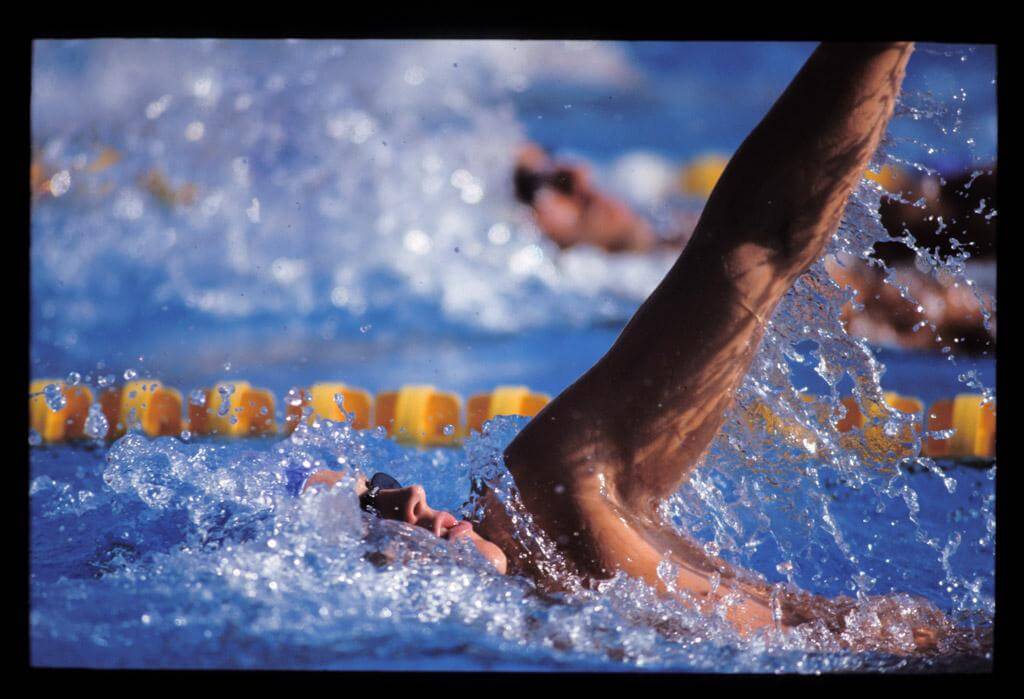 With the XVI FINA World Championships in Kazan, Russia, just around the corner, I figured this would be as good a time as any to look back at the last couple decades of world championship meets.

So both the celebrated moments, and the notorious ones as well.

And off we go, la-la-la-la, swimming merrily down memory lane…

In the same way that the East Germans bulldozed everyone in their way through the 1970’s and 1980’s the Chinese women, riding a wave of suspicion earned by those who had been around to see the GDR domination of previous decades, ran the table in the women’s events in Rome that summer.

Led by Le Jingy’s rabid 50m freestyle performance, where she would win by over half a second, the Chinese women dominated the podium in every stroke except for the breast.

In the relays the Chinese were so far ahead that silver would be at least 4 seconds off—in all three races.

Samantha Riley of Australia would capture both breaststroke titles, with a world record in the 100.

(Riley would have her own little doping controversy the following year when her coach, Scott Volker, claimed to have thought to have given her pill for a headache, but which actually contained a bad-bad substance.)

And after placing 9th in heats and then essentially having her teammate Sandra Volker paid off to scratch, Germany’s Franziska Van Almsick had one of the swims of the meet, breaking the 200m freestyle world record in a time of 1:56.78.

There was some fast swimming on the men’s side, albeit with less controversy.

Alex Popov continued his streak of domination of the men’s sprint events, while Kieren Perkins did the distance double (no 800’s at this meet at this point), doing the 400m free in WR time (3:43.80).

Tom Dolan of the USA would break the other 400m world record (individual medley), while Finland’s Jani Sievinen would also break the 200m IM world record.

Much like Rome four years earlier, these world championships were bookmarked with controversy.

After a lackluster performance in Atlanta where they only won 6 medals, all eyes were on the Chinese women. Suspicion had turned to outright calls for organized suspension.

In a manner of speaking, they didn’t disappoint.

When going through a routine customs check enough human growth hormone (HGH) was found in one of their swimmer’s bags to fuel the entire team for the duration of the meet. Despite the trafficking-type of volume, the athlete, Yuan Yuan, and her coach, were the only ones kicked out of the meet.

Other pre-competition testing revealed triamterine (a masking agent) in four other Chinese swimmers, who were given 2-year suspensions, along with 3-month suspensions for their 3 coaches.

Once the swimming actually got going there were some fresh faces on the podium.

The Australians made the most of home field advantage, giving the Americans a run on the overall medal count (24-20), although the US would double up in the gold medal column.

Michael Klim led the charge for the hometown team, having a massive meet in taking home 7 medals. He would go bronze-silver-gold in the 50-100-200 freestyles, in addition to another individual gold in the 100 butterfly, and two relay golds and a relay silver.

The Perth worlds were the coming out party (pun not intended) for a 15 year old Ian Thorpe. With size 17-feet the young man from Sydney dubbed “Thorpedo” would become at the time the youngest male world champion ever in winning the 400m freestyle.

While countryman Klim cleaned up all the hardware, and “Thorpey” captivated a nation, almost lost was Grant Hackett, who had assumed the mantle of distance king, winning the mile by 10 seconds ahead of Emiliano Brembilla and Daniel Kowalski, who by now was probably getting pretty frustrated being generally ranked the 2nd fastest distance swimmer in the world, but also the 2nd fastest Australian distance swimmer.

With the Chinese women in a diminished role there was a ton of different countries getting medals on the women’s side.

10 years after her silver medal winning performance in Seoul, Costa Rica’s Claudia Poll would win the 200 free. Hungary’s Agnes Kovacs would win the 200 breaststroke. Other countries winning medals were Canada (including Lauren Van Oosten, who I was training with at the time in a dusty old pool in Nanaimo), Ukraine, Netherlands, Japan, Slovakia, and the French.

(Oh, and that Bill Pilczuk guy surprised the heck out of everybody by blasting off the blocks and defeating the immortal Alex Popov in the 50m freestyle.)

For the 9th FINA World Championships we venture to Fukuoka, Japan for a world championships that was controversy free*!

The Australian momentum from a successful Olympics in Sydney carried on here, with the team from down under taking the gold medal count (13 to 9 for the Americans), although they trailed by 7 in the overall medal count (19-26).

If Perth had been the coming out party for Ian Thorpe, than Fukuoka would be a full blown rager. He’d win 6 gold medals, along with four world records and two championship records.

On the first night he would throw down a devastating 3:40.17 in the 400m freestyle (he’d break it again next year, a mark that would stand until Biedermann’s rubberized swim in 2009) and also anchor the Aussie 4×100 freestyle relay, again unseating the Americans like they had in Sydney. (The US would be disqualified, anyway.)

Of note during the relay was Pieter Van den Hoogenband of the Netherlands, who posted a very unpedestrian 47.02, which at that point was the fastest split in history.

Although Hackett would place in both 400-800 freestyles, he would utterly destroy the field in the mile, in the process dropping a full 7 seconds off of Kieren Perkins world record.

(Just how far ahead of the field was he? Over 24 seconds.)

Although outdone in the “sweet molasses that was fast!” category, the American men still had some solid performances, even if two of their relays got disqualified.

Anthony Ervin, fresh off of his Olympic gold medal in the 50m free, would not only win the splash and dash, but also win the 100 freestyle bettering a 13-year old American record. (Sorry, Mr. Biondi!) It would be Ervin’s last international meet before coming back 10 years later.

There was also that Michael Phelps kid (maybe you’ve heard of him), who at the age of 16 was already in the process of lowering his own 200 butterfly world record, touching first in 1:54.58.

While there were no world records for the ladies, there were still some fast performances.

The Aussie women shined in the relays, winning 2 of 3. Sort of. Had they not gotten disqualified for their second win in the 4×200 freestyle relay (they jumped into the pool after they touched first in celebration—oops!) the Aussies would have taken 5 of 6 relays.

Inge de Bruijn dominated the two freestyle sprints, winning both by at least half a second and was never challenged. Yana Klochkova of the Ukraine would win both IM’s, while also dominating the 400m freestyle, winning by over a body length.

At her first major international meet Natalie Coughlin of United States would win a medal of each colour, winning her gold medal in the 100m backstroke, just a preview of the international career that lay before her.

While she didn’t win gold in any of her events, American Kaitlin Sandeno was all over the face of the distance events, placing 5th in the 400IM, winning bronze in the 200 fly, bronze in the 800 free, and 6th in the mile. (Hannah Stockbauer would be the inaugural winner of the women’s mile in 16:01.02.)

*There were some random problems with the touchpads over the course of the meet. For instance, in the 100 free Van den Hoogenband touched first according to the scoreboard, but the backup touch-pads gave the win to Ervin.

After 2001 FINA decided to start hosting the meet every two years.