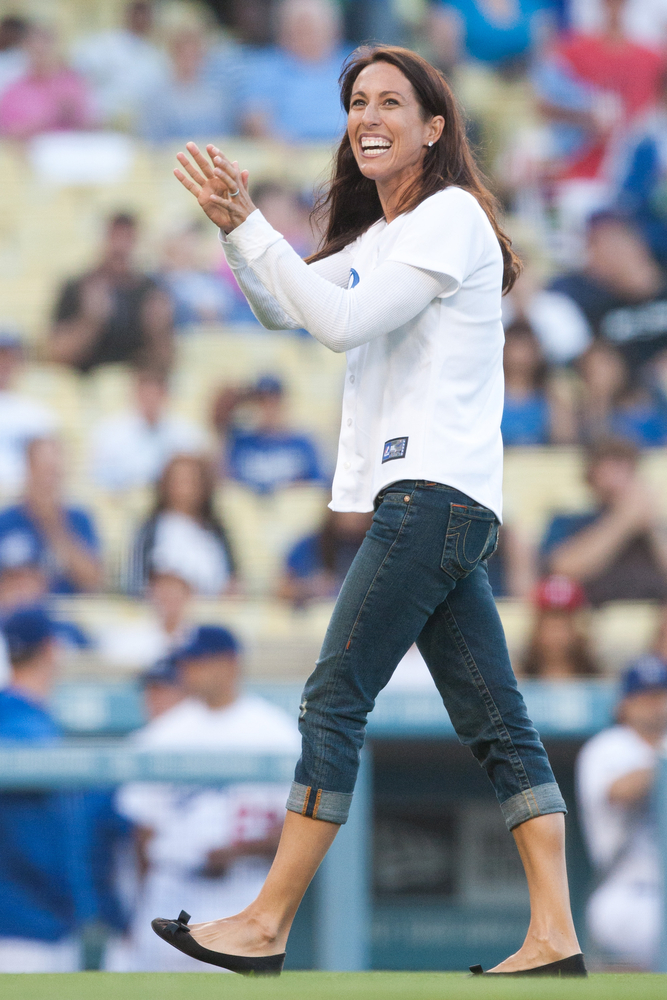 At the 1988 Seoul Olympics Janet Evans unleashed a beating on the swimming world, winning three individual gold medals, in the 400m and 1500m freestyles, as well as the 400m IM. Her unorthodox style – she windmilled across the water – was in stark contrast to the large, built women of the Soviet Union and East Germany that were most often her competition in the 1980’s.

The 5 foot Californian stormed on the scene as a 14 year old, and by the time she was 15 she’d already broken the world records in the 400, 800 and 1500m freestyle. The following year she would throw down her performance in Seoul, cementing herself as the headliner in women’s distance freestyle.

1. In preparation for the 1992 Barcelona Games, Janet Evans left the Stanford swim team – simultaneously renouncing her scholarship — when the NCAA imposed weekly training limits on athletes. Evans, who was routinely training upwards of 30+ hours per week, felt that the new rules would limit her training. The rules were put in place in order to give students more time for hitting the books, limiting to in-season practice hours to 20, with a maximum of 4 hours per day, and one mandatory day off per week.

2. In 1989 she won the James E. Sullivan Award, which recognizes the top amateur athlete in the United States. She was also given the honor of being Swimming World Magazine’s Swimmer of the Year (International Female) for the years 1987, 1989, and 1990 (although inexplicably, not 1988 after her unreal performances in Seoul).

3. As far as swimming nicknames go, hers was a little longer than most, and somewhat clunky sounding, yet otherwise utterly befitting of the time period in which it was created: “Miss Perpetual Motion.”

4. Her 400m freestyle world record stood for 18 years. It wasn’t until Laure Manaudou was able to break it in 2006. Similarly, her 800 freestyle record stood for nearly 20 years. The standard of 8:16.22 was not broken until Great Britain’s Rebecca Adlington eclipsed it in winning the race in Beijing in 2008. The only women’s record that has lasted longer was Willy den Ouden, a Dutch 100m freestyler whose mark last from 1936-1956.

5. Evans was the first woman to defend an Olympic and World Championship title in one event.

6. She went a period of over five years where she went undefeated in the 400, 800, and 1500m freestyle. The streak was broken when Germany’s Dagmar Hase out-touched her in the 400 free at the 1992 Barcelona Olympics.

7. Evans was given the honor of carried the Olympic torch during the Olympic ceremonies in Atlanta, Georgia in 1996. She handed the torch to boxing legend Muhammad Ali.

8. She won the 400m and 800m freestyle more times at Nationals (or US Open as it is called now) than any other swimmer in the history of the competition. Her final tally? She won both events 12 times each.

9. At the age of 40 Evans made a comeback attempt at the 2012 Olympic Trials after 15 years out of the water. Flying in the face of conventional wisdom when doing so – most comebacks involve a return to shorter, more power-oriented events – Evans stuck to her bread and butter, the 800m freestyle.

10. At the 2012 Olympic Trials Evans received a long, thunderous standing ovation when she stood up on the blocks before her race. Despite the love from the crowd, she placed 80th in the 400m freestyle and 53rd in the 800m freestyle.