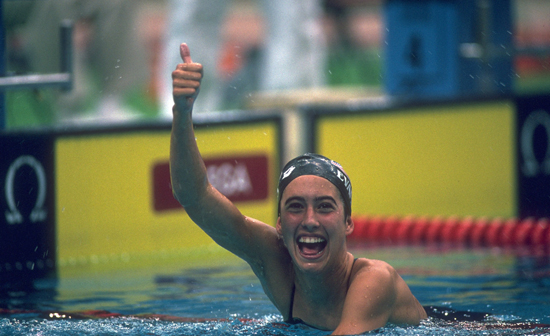 The 400m freestyle world record is overseen and ratified by FINA, the aquatic sports governing body responsible for competitive swimming. The 400m free is a unique event in that it is an event – along with the 800 (for women) and 1500 (for men) that is competed only in freestyle and the individual medley, unlike the “specialty” strokes which are competed at the 100-200 meter distance at the Olympics.

The event was initially recognized as an event in 1908 in long course meters, and since 1991 FINA has also kept track of and ratified the distance in short course meters as well.

Since the first 400m free was held in the Olympic Games in London in 1908, the world record has dropped by nearly two full minutes. The first man to hold it was Henry Taylor of Great Britain in a time of 5:36.8. Famed 100m sprinter and Tarzan actor Jonny Weissmuller who would also break the minute in the 100m freestyle world record was the first to break the 5 minute barrier as well when he did so in March of 1923 in New Haven.

It wouldn’t be until 50 years later, when Rick DeMont would break the vaunted 4 minute barrier in September of 1973 at the FINA World Championships in Belgrade, Yugoslavia. Names like Tim Shaw, Mark Spitz and Brian Goodell (all Americans) would continue to lower the mark during the mid-to-late 70’s until finally Vladimir Salnikov of the Soviet Union would be the first man to break 3:50 at a dual meet between the Soviets and East Germany.

While Ian Thorpe isn’t currently the world record holder in the event, he was the most recent athlete to shave significant time off the record. He beat legendary Aussie distance swimmer Kieren Perkins (better known for his stranglehold on the 1500m freestyle world record during the 90’s) mark of 3:43.80 swimming a 3:41.83 at the Pan Pacific Championships in Sydney, Australia in 1999. Three years later at Commonwealth Games in Australia he would swim an unreal 3:40.08, which stood for almost exactly 7 years before falling to Paul Biedermann of Germany, who would lower it by the slimmest of margins, swimming a 3:40.07 at the FINA World Championships in Rome during the polyurethane era in July of 2009.

Here is a video of Biedermann’s race in Rome:

On the women’s side the world record was dominated by the Americans over the years. Ethlda Bleibtrey was the first woman to hold the record in a time of 6:30.02 back in 1919. In the 1960’s and 1970’s, a line-up of Americans including Marilyn Ramenofsky, Martha Randall, Pam Kruse, Debbie Meyer, Keena Rothhammer, Heather Greenwood, Shirley Babashoff and Kim Linehan would all take turns owning the record, with intermittent record breakings by Australia Shane Gould and East Germany’s Barbara Krause and Petra Thumer.

The last great American in the race would be the incomparable Janet Evans, who would set the mark at 4:03.85 in Seoul at the 1988 Summer Olympics, a time that would last in the record books for nearly 20 years.

Laure Manaudou of France would finally break Evans’ mark a couple times in 2006, and then Italy’s Federia Pellegrini would be the most recent world record holder, and also becoming the first woman to siwm under 4 minutes, when she did so in a time of 3:59.15 at the FINA World Championships in Rome of 2009.