Being a great teammate is more than just being a good person. By being an awesome teammate you help create a culture that fosters excellence for everyone in the pool (including yourself).

We’ve all had those teammates whose positivity is infectious. Who cheers on the superstars and the little kids. Who is there to listen to you when you stumble, and throw you a high-five when you crush your PB.

There is no reason that swimmer cannot be you.

Here are 10 ways to be a better teammate:

1. Help with the equipment (without being asked to).

No one likes swimming without lane ropes, backstroke flags, or the digital clock. And yet most swimmers seem to equally dislike setting them up.

Don’t wait for coach to yell at you to do it. And don’t sulk your way out of doing it simply because you helped out last time. The faster the equipment is in and out of the pool the quicker you can get on with the rest of your day.

2. Help out with the younger kids.

Believe it or not, the kids in the groups below you look up to you and your swimming awesomeness. You already know this; you remember the awe and awkwardness that came with the first time you trained with the older group.

Spend some time with the younger kids on the team, it’ll form a bigger impression than you realize on them. 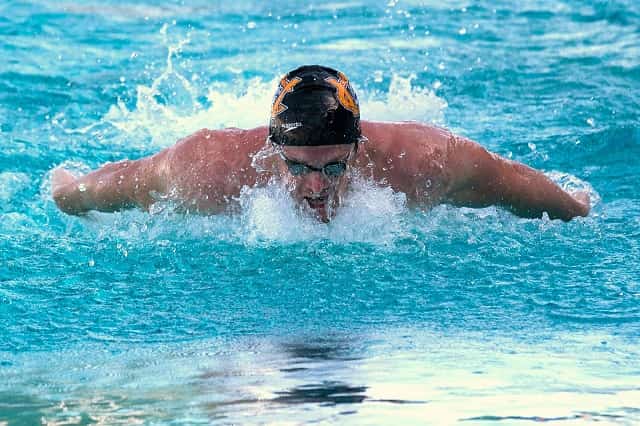 3. Be positive in the midst of a hellish set.

We’ve all been there—the swim practice that is so ludicrous, so impossible, so shoulder-numbingly tough that it’s hard not to lapse into grumbles and complaining.

Do yourself and the rest of the group of the lane a favor and keep it to yourself.

Be the guy or gal who helps the rest of the lane by being supportive and encouraging instead of bringing them down.

Is there anything more infuriating than swimming in front of someone who you absolutely know is leaving early off each wall?

You spend the rest of the rep trying to put distance on them (which may turn out to be a training advantage as it forces some extra effort out of you) and silently fantasizing about unleashing a vicious down-kick the next time you feel them riding your toes.

5. Set the example in the lane.

It’s crazy how much the actions of others end up influencing us.

If the three swimmers ahead of you are pulling on the lane rope, pulling in from the flags on kick sets, and generally keeping loose standards, it becomes pretty easy for you to slip down the slope as well.

If, on the other hand, everybody kicks all the way to the wall, keeps their fingers off the lane rope, and does the sets

I get it, not everybody is a natural-born cheerleader. There are always those swimmers on each team that can bellow, whistle, and recite all the team’s cheers at a moment’s notice.

For you introverts giving a simple “Go get ‘em!” to your teammate as she heads over to the ready room can give her that little bit of wind in her sails.

It’s exhausting training with the athlete that complains about everything, who is constantly asking for easier intervals, who doesn’t like the main set, who doesn’t want to do the tough sets.

If this is you, stop sulking.

The bad body language that comes with complaining will actually make you swim worse, so all you are doing is doubling down on a poor performance.

8. You keep your squad accountable to one another.

Being able to call out a teammate on a lackluster effort is a fine art; too tough and you isolate them, too soft and they laugh it off.

Being able to constructively point out a shoddy effort or attitude can be challenging, but good teammates make each other better, even if that means having to call them out on their shenanigans once in a while.

At the beginning of the season you and your squad sat down and wrote out some goals both individually and for the team.

Being apart of a teammate’s pursuit for excellence in the sport—and having them being willing to open themselves up to you about what they want to accomplish—is a privilege.

Support and push your teammates to encourage their and the team’s goals.

10. Swim outside your bubble once in a while.

With most teams swimmers of various disciplines invariably cluster.

The distance swimmers go off to the animal lane to not be seen for two and a half hours. The sprinters do their blast efforts together. The breaststrokers do their thing, and so on. As a result things can get a little cliquey.

When you have the chance take it to expand your bubble a little bit and spend time with the other swimmers on the team.