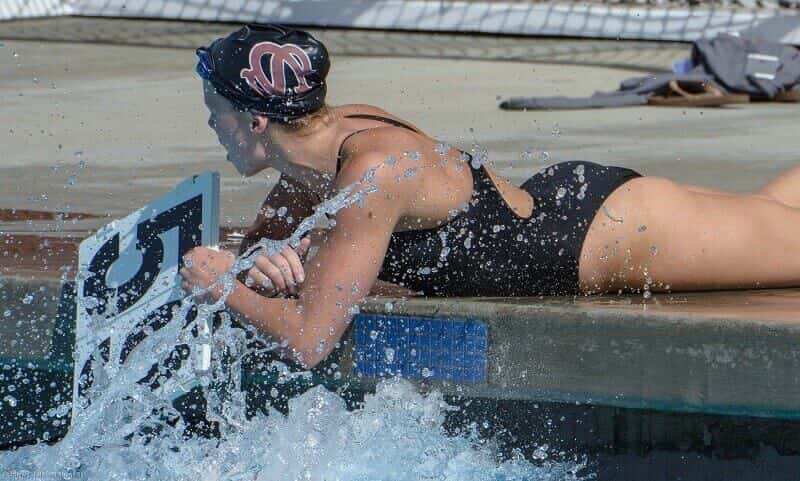 Life in the animal lane is for a select few. Between 5k’s for time, losing lap count and parts of your sanity during the long sets, and the twangs of envy at the speed and brevity of the sprint group’s workout, here are 17 struggles of the distance swimmer.

You swim more miles on a weekly basis than most people drive. Your warm-ups are longer than most swimmer’s entire workouts. And you swim a solitary life, the only company the black line and the sweeping hand of the pace clock.

It’s the life of a distance swimmer.

Though, it can’t be said that there aren’t some perks to living in the “animal lane.”

There are some benefits to hammering out an unyielding number of distance swim workouts.

You are hilariously conditioned. Once you find a rhythm you can lock into it for hours at a time. And your parents appreciate the cost-per-yard that is involved.

Of course, if distance swimming were easy, everyone would do it.

Here are just 17 of the struggles of being a distance swimmer:

1. Losing count becomes a part of your training. Coach lets you have it every time it happens, but it’s inevitable, especially during those short course workouts where all it takes is a momentary lapse in focus to lose your mark in the set. Short course is doubly tough as it’s harder to backtrack where you are by looking at the pace clock.

2. You have 12 different ways to keep track of laps. It’s remarkable how many different ways we can conjure up to keep track. Count up, count down, count to half (almost halfway done!), count to a third, and so on. Keeping a wide variety of ways to keep count ensures some variety, while the inconsistency with how we count often leading to number one in this list happening more often than it should.

3. Your warm-up is often longer than the full workout of your fast-twitch brethren. Once that first hour of the workout eclipses, you are just starting to feel warmed up, while the sprint group is sauntering over towards the hot tub. Must be nice.

4. Finding someone to count laps for you. It’s five minutes to race time, and the swimmer who you usually trade-off counting duties with is in the same heat with you. You scour the deck for someone, anyone, who will spend the next quarter of an hour and change with you.

5. Having a bad counter. Great, so you found someone to spend the duration of your race with you. Only they pull the counter out too early. Don’t dip it deep enough into the water. Shake the counter so hard you can’t read it through your fogged up goggles.

6. Getting a bad song stuck in your head is doubly painful. It’s odd, of all the swimming workouts from my youth the ones I remember most vividly were the workouts where I had a terrible yet catchy song stuck in my head for the entire duration of the workout.

8. Chafing on your neck. Yes, coach has told you repeatedly to breathe bilaterally. But your galloping freestyle waits for no coach, and once you settle into that rhythmic breathe-every-two-strokes gallop—which means you are breathing to the same side for the rest of the workout—this means some inevitable chafing of skin-on-skin or suit-on-skin at the base of your neck.

9. Having to go to the bathroom mid-long rep. Even for you swimmers who pee in the pool this can be infuriating—getting hit with having to pee mid 5k makes those flip-turns uncomfortable, and you consider stopping mid-lap to “fix your goggles” while you float and uh, you know, stuff.

11. Your taper is far shorter. In reality, it’s not much of a taper. While the twitchy sprint group starts taper three weeks out from the big meet your “big” drop in volume comes a few short days before the meet. And even then, your swimming taper workouts are still nearly a week’s worth of workouts for the sprinters.

12. You actually look forward to long course. Just because you have done a kazillion and a half flip-turns doesn’t mean that you are actually that good at them, or that you like them. After all, they shatter your rhythm. And being not such a hot freestyle kicker, the breakouts don’t make much of a difference anyway. And so you look forward to the big pool. Less turns, and more time to saddle into your rhythm.

13. You catch yourself closing your eyes during long sets. As a reformed distance swimmer I was super guilty of this. It wasn’t because I was tired or anything, but closing my eyes for stretches of the lap (long course preferably, that’s some dangerous living attempting this short course) simply felt like the thing to do.

14. When you think you are supposed to hear the bell…but don’t. You’ve been hoping and praying for that cursed bell since about the 500m mark. Having lost count somewhere around there you continue guesstimating that the bell lap should be this time…Or this time…No? How about this time…

15. Your race gets partial coverage during the Olympics. Unlike the sprint and mid-distance races yours always get short-shrift when the sport is on the biggest stage. The broadcasters will show the start, cut away for some volleyball action for ten minutes, and return to the pool just as the bell is being clanged. “And now, back to the pool for the end of the women’s 800m freestyle!” (Although, with Katie Ledecky looking to rock Rio this summer, one would hope that the race would get full coverage…)

16. Being 45m from the wall, and hearing the bell being rung for someone else. Yes, it totally stinks that someone is dusting you to the point that they are getting their bell rung while you are quite literally on the far side of the aquatic center. But that being said, there is a sense of sweet relief in knowing that the end is near.

17. You’ve got two gears, and that’s it. There is the pace that you hold on the first and last 100. And then the pace you hold everywhere in-between. Your range is a slight variation of essentially the same speed, varying only by a couple of seconds per 100.