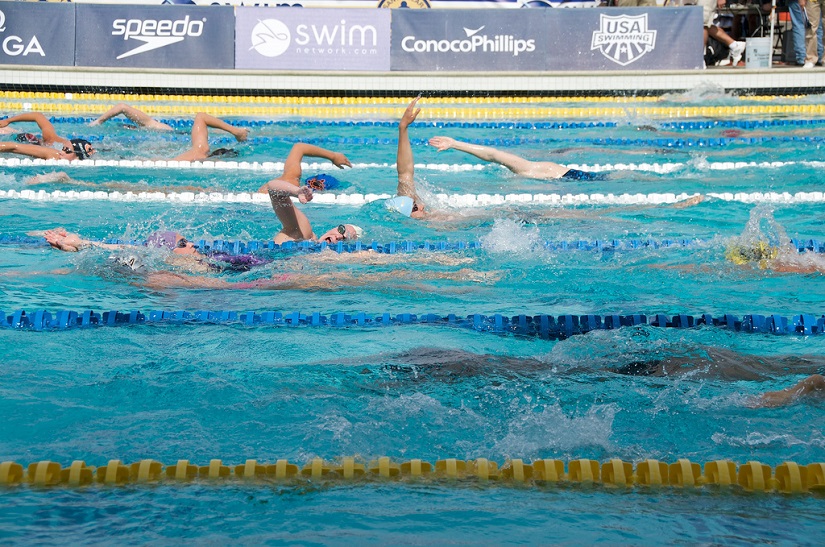 As someone who trains almost exclusively during open lap periods I have experienced more than my fair share of lane ragey moments.

Last night, for instance, a family of four head up breaststrokers jumped into the fast lane and breaststroke’d their way up the middle of the lane.

When I nearly plowed into them they looked at me with surprise, even though they would have had to literally step over the “fast lane” sign to jump into the water.

It’s not just in the fast lane either where lane rage presents itself.

On more occasions than I can count I have watched swimmers collide at super slow mo speeds, witnessed very grown up men yelling at each other over the lane rope, and seen “swimmers” riding pool noodles across the lanes, oblivious to the log jam of swimmers behind them.

While this post is largely being written as method of flushing some of the frustration of my own training, there are still some good reminders in here for those swimmers out there who aren’t familiar enough with the rules of the pool.

Alright, let the scolding begin. Here’s how to make lap swimming less enjoyable for the other people in the pool.

Nearly every pool has a set of signs that indicate basic pool rules (no running, circle swimming only, etc), and most lap swimming pools have signs for speed (fast, medium, leisure) at the end of each lane.

99% of mix-ups and collisions can be completely avoided by quickly glancing at pool directions.

2. Jump in the lane with the least amount of people, regardless of how fast or slow they are going.

How many people are in a lane should not be the sole motivating factor when choosing a lane.

Speed is the first.

Believe it or not, you are better off (aka safer for everyone involved) swimming in a lane with 5 people swimming generally the same speed as you compared to swimming with 1-2 people swimming completely different speeds than you.

The latter means you are constantly overtaking or being overtaken, exponentially increasing the likelihood of collision.

3. Swim breaststroke down the black line.

Breaststroke in a lane with a wall almost always causes issues.

Why is this a problem?

Because generally speaking swimming breaststroke next to the wall means you need way more space, leaving swimmers drifting off into the middle of the lane, making it almost impossible to pass them without getting a swift kick to the face/shoulder or side.

Swimming with breaststrokers is hard enough—particularly those whose kicking motion is starfish-like—don’t make it worse by swimming up and down the black line.

4. Collect your life in the middle of the lane.

You did your swim, totally crushed it, and now you are a wheezing, quasi-dying heap of limbs with arms in the gutter.

I’m happy for ya. Truly. You crushed it.

Now how about you move over to the corner of the lane and put your life back together so I don’t have to (1) flip turn on the back of your head or (2) turn around at the flags.

Seems like a rather obvious point, no? Keep your chlorinated hands to yourself, buster.

If you are going to pass someone, do it without clawing their feet, calves and side.

And absolutely don’t be that level 12 jerk-off who grabs onto the pretty girl’s ankle even though you are going slower than her (that’s a true story, by the way).

When you walked out onto the pool deck, the fast lane was empty. So ya hopped in, and started belting out some sweet, sweet laps.

A little while later, the lane began to fill up with swimmers faster than you, overtaking you every 100m or so.

But because you were there first, it’s your right to stay in the lane, right? Wrong.

It’s not about whose lane it is or who was there first. Again, it’s about speed.

If you are swimming slow in the fast lane you are creating an unsafe environment for everyone in the lane. Sure, it sucks having to get booted because you are the slowpoke in the lane, but it beats getting run over at the wall and creating traffic jams behind you.

7. Overtake other swimmers with all the aggression.

Lap swimming is a shared environment. We are all in it together, man.

No matter how fast you are, or think you are, it doesn’t grant you the right to be a jerk when passing people. Pass people with courtesy. Be the bigger person. Accommodate other swimmers.

When passing swimmers, do it with class. Leave them wondering at your grace, instead of your aggression.

It doesn’t matter if they are in the wrong, or you are in the right, at the end of the day we are all there simply to workout and enjoy ourselves.

Okay. I’m not going to lie, feel a bit better about things now. Back to the pool I go!

How to Get Started with Swimming for Exercise. Swimming is a great way to get into shape and burn a ton of calories. Here is everything you need to know about getting started with swimming.