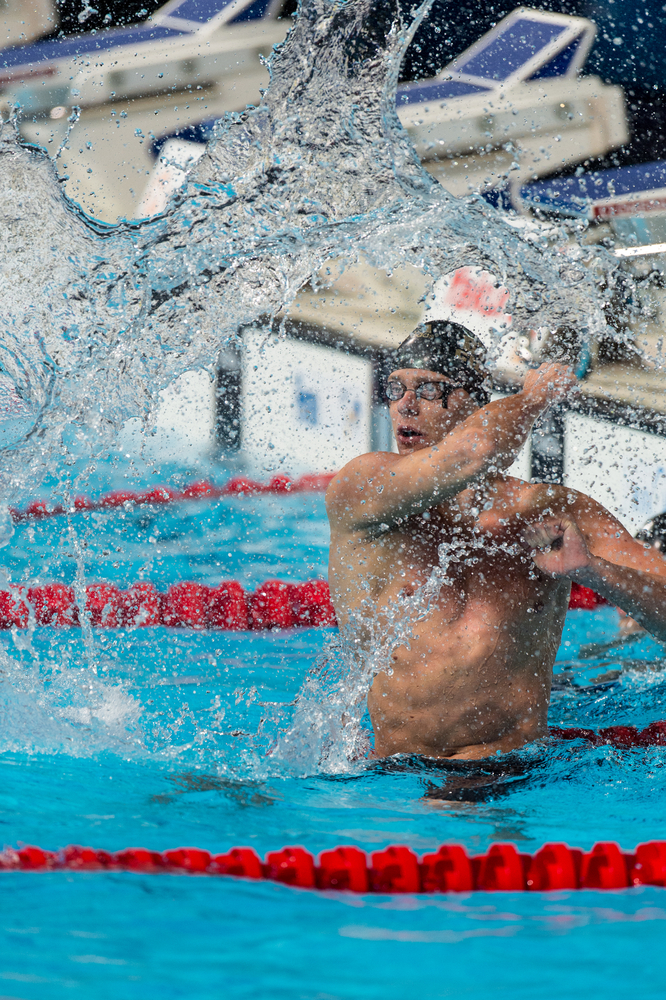 One of Mike Bottom’s (head coach at the University of Michigan) techniques for keeping swimmers engaged during those trying main sets is to have his athletes practice their post-race celebration mid-set. Not only is this a great way to help athletes visualize their own success, but it also makes for a loose atmosphere at practice.

On a personal note, I’ve always been a huge fan of the jump in the pool celebration. Whether it is tossing coach in at the end of a big meet, or doing so as a team after the team points totals are announced.

The one that stands out most during my career was back when I was a tween competing at a meet at the Pan Am Pool in Winnipeg. The senior men relay for the Regina Optimist Dolphins had broken the provincial record for the 4×50 medley relay. There was hooting, hollering, and ultimately jumping as the 3 swimmers splashed into the water to join the anchor to celebrate some more in the pool. While joyous, they were also DQ’d for jumping into the pool post-race. Oops.

Follow Bottom’s example and practice post-race celebrations the next time you find yourself in the midst of a challenging main set.

The I Can’t Believe I Did It (Non-Crying Edition). Nathan Adrian nailed this one at the London Olympics. A big smile, a hand covering your eyes for a moment, and then looking back up at the scoreboard before you tell yourself, “Holy crap, I did it… I actually did it!” If people didn’t love him before, they certainly loved him after his genuine reaction to winning gold.

The I Can’t Believe I Did It (Crying Edition). Cesar Cielo is known for getting, umm, overly emotional after his races. While some serious thespian skills are required to unleash the water works repeatedly over the course of a practice, there is great dramatic effect to this celebration when applied.

The Bird Flip. Duncan Armstrong, in his post-race celebration after the 200m freestyle at the Seoul Olympics mounted a lane rope, and gave the crowd what appeared to be a double middle finger salute. A little crass, but when you come back over the last 50 metres and win Olympic gold over Matt Biondi, who was hyped to be the next Phelps, err, Spitz, in Seoul, you can throw decorum out the window.

The Angry Bird. Find a lane rope, prop yourself up on it, and commence flapping your arms up and down against the water, causing a massive splash that lets everyone know that you are, in fact, the man. Sun Yang performed a textbook Angry Bird after his 1500m win in London, where he obliterated the world record by three seconds and nearly became the first man to break 14:30. Bonus points for loud, caveman yelling.

The Fist Pump. This one is by far the most common. You can do the quietly satisfied, subtle one-pump, or you can give it a full swing with your arm, to the point that it looks like you may launch it from the socket. Stretch liberally before doing the baseball-pitch fist pump.

I’m Number One. Part fist pump, part stoic, a simple raise of the arm, and that lone index finger that proclaims that you are numero uno. If somehow you could stuff a massive foam finger under your block and wield it in your post race party I imagine you would make the late night Sportscenter Top 10. So in other words, worth a try.

The Stalin. Stoic to the end, this swimmer looks up at the scoreboard, sees the WR beside their name, and is completely unmoved. No smile, no flapping, just a small nod of the head that signifies mission accomplished. I have always suspected that swimmers who react like this wait until they get back to their hotel room, where they get in the bathtub and perform a 15 minute Angry Bird/Can’t Believe I Did It (Crying Edition) in the company of their gold medal and teddy bear. Or something like that.

The Crowd Shout Out. Even if you don’t know anyone in the crowd, pick the best looking member of the opposite sex and give them a point and a smile– Yeah, you! You know why.