In a new series on YourSwimLog.com, we are going to be talking to collegiate coaches across the country about recruiting and their respective programs. The idea is to help swimmers make better informed decisions when it comes to seeking out collegiate programs to continue their swimming.

Today we have Petra Martin, head coach of the women’s swim team at Bowling Green State University, a Division I program based out of Bowling Green, Ohio, dropping by to answer a few quick questions on the recruiting process. 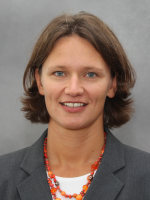 Martin just completed her 4th season as head coach at BGSU, who compete in the Mid-American Conference. This past season (2013-2014) they repeated their 3rd place finish at the Mid-American Conference Championships. Last year Martin was named MAC Coach of the Year. Martin has an extensive background in the sport, logging eight years experience with the Czech National Team, three years swimming with the University of Maryland, and another three seasons with George Mason University prior coming to BGSU.

What are the biggest mistakes or assumptions student-athletes make during the recruiting process?

A lot of mistakes that we see are in the self evaluation area of the student-athletes. A lot of the prospects don’t do a very good job researching the quality and high level of our program. Another mistake that we see pretty often is the inability to effectively communicate.

What surprises student-athletes most during their first year? What do you find they are least prepared for, or possibly, are most surprised to see/experience?

I believe that the biggest surprise comes in the fact that we expect them to be attentive to details all the time and be mentally pro-active in all aspects of their training and every day lives. We stressed that to them during the recruiting process but I don’t think they fully realize how difficult that is until they start going through that process here. We also want them to become independent and make their own decisions and choices and for a lot of them that is a new concept as well.

What are some non-swimming and non-academic questions that you ask athletes during the recruiting process?

A lot of times I ask them other things that are going on in their lives, what do they like to do outside of those two areas but I also try to talk with them about things and happenings that might be going on in general-world events, domestic news. I think it’s good to see if they are plugged into what is going on around them and not just their personal worlds.  If they are not too responsive to that I talked about some fun things that are going on with our team, the University, etc.

What is the most important answer you look from a student-athlete when talking to them for the first time?

I actually think that my first question preceding that answer is the important part as I can’t control their answer. The question is what they are looking for-environment wise and what they would like to achieve athletically and academically as well.

What are some “red flags” of prospective student-athletes?

Lack of communication abilities, not knowing what they want as far as their college experience goes. When they come on a visit and the parents do all the talking that is usually a not a good sign either.

Outside of swimming and academic performance, what most impresses you about a new recruit?

How composed they are, good body language, ability to communicate well and show independence and drive.

What is the best piece of advice you could give for someone about to go through the recruiting process?

Do your research, think about what you want and what place will be a good match for you in a sense that it will challenge you and make you a better athlete, student and a person but you will be also able to contribute and make the program better. Be honest with the coaches you are talking to.