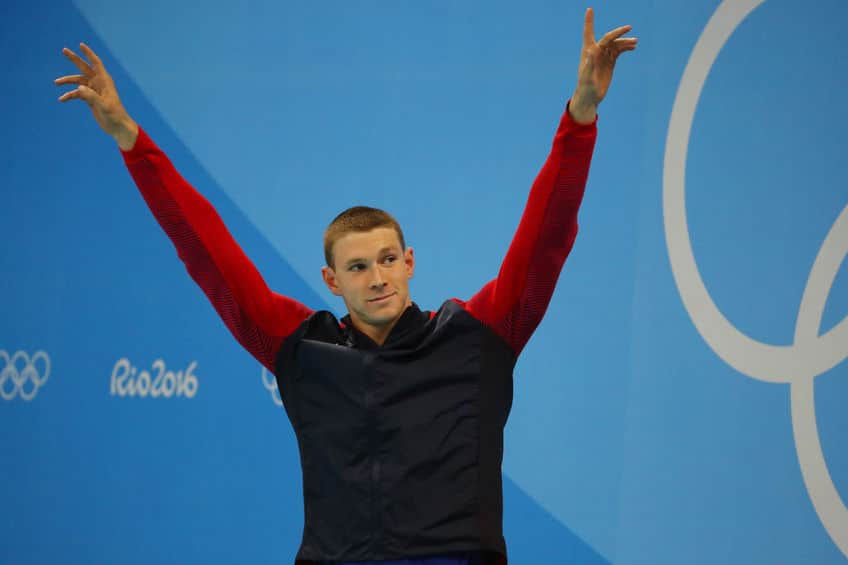 Ready to smash some PB’s? Here’s how to build a legendary pre-race routine so that you are locked in on race day.

You’ve done the hard work in the pool. All the stomach-churning lactate sets, the early mornings, the “I’m so tired I can’t feel feelings” holiday training camp.

You’ve set yourself up with a fancy-pants new racing suit, stocked up on shaving supplies, and are getting your butt-butt to bed early even though you are pumped to compete.

With race day fast approaching you want to make sure that you can channel all that hard work into a truly epic swim.

One of the ways to crystallize your efforts is with a pre-race routine.

Elite swimmers don’t go into competition simply hoping that things will go their way. They plan and prepare to give themselves the best possible chance of success.

Here’s why you should get busy creating your own pre-race routine, some examples of what the best swimmers in the world do, and we’ll go through some steps to help you build a deadly pre-race routine of your own.

Let’s get after it.

Why Should I Use a Pre-Race Routine?

There are a few constants in elite performers in the pool. They have poise. They thrive under pressure. They prepare for success in all they do.

And where do you think a large part of these constants come from?

A confidence in their preparation. A refusal to let their performances go to chance. The most obvious example of an elite swimmer’s commitment to preparation is in training, but this attitude extends to how they prepare for competition.

Think of the pre-race routine as a swimmer’s personal recipe for being physically, mentally and emotionally ready to swim like a chlorinated gangster.

As you full well know if you’ve ever trained your butt off only to choke on the big day, being mentally prepared to race is critical.

How does it do that?

The pre-race routine is a primer. You do the things that get you jacked up and hyped. Your pre-race routine helps you adjust intensity and stress/excitement levels to a point that promotes high-grade swimming.

It gives you familiarity in unfamiliar situations. The pre-race routine is a plan that allows you to ignore distractions and pressure. By focusing your energy inwards on things you can do, you are spending less anxiety-drenched attention on what’s happening around you.

It gives you confidence. Done enough times, your pre-race routine becomes, well, routine. You have a set of concrete, reliable steps that you know will give an excellent performance. This kind of confidence is hard to fake.

It can be wielded in all types of competitive scenarios. With some tweaking and consistency, you will be able to use your pre-race routine anytime, anywhere.

The goal of the pre-race routine is simple: to allow you to stand on the block, take a big old breath, and know that you are ready to completely rock and roll. 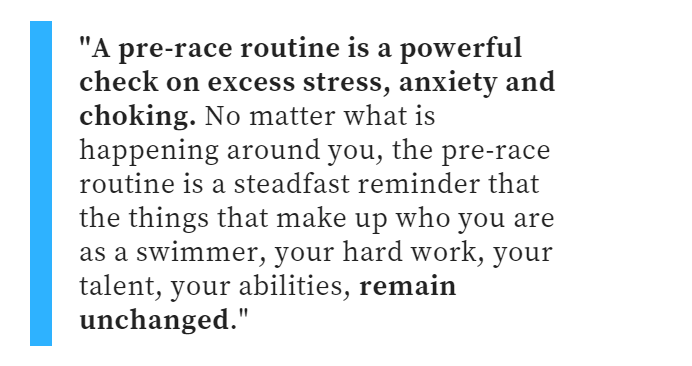 Now let’s get into building a pre-race routine of our own.

What does it take for you to get you ready?

This is the most obvious question, isn’t it? What does it take for you to be prepared—mentally and physically—to lay waste to your personal best times?

From the warm-up to your mental state, what are the things that have worked for you in the past that you know promote high-performance swimming?

It helps to look back at your performances and figure out what promoted those performances. Avoid the superstitions and rituals and look out for how you felt and what kind of emotional state you were in when you performed your best.

It’s a work in progress.

Get inspired by what other swimmers use for their own pre-race routine and see if it works for you. If so, keep it. If not, toss it. There is no “perfect” routine or pre-performance recipe—just what is perfect for you and your needs.

Just cause Phelps’ routine worked for him doesn’t mean it will work for you. And vice versa.

Your pre-race routine will be tested, refined and tweaked over time. While the general steps may remain the same, there will be things you change over time.

In a review of Olympic-distance triathletes, the use of a pre-race routine was connected to faster times and better finishes [1].

The more you use it, the stronger it becomes.

The power in a pre-race routine is comfort and familiarity.

Once you step into the routine, it’s like those ratty, old sweatpants you love. It’s home. It’s a place where the competition, distractions and the crowd melt away. Where you know if you just follow the steps of the routine there is a high-grade swim waiting at the other end.

This level of comfort and fast swimming happens with repetition, so once you’ve put together your little routine, use it to strengthen it.

Expect a measure of uncertainty and difficulty.

Meticulously planning your day from wakey-wakey to race time with the expectation that everything will go perfectly is asking for trouble.

The reality is that even in a very controlled environment, you only have so much control.

Case in point: At the Rio Olympics, American Ryan Murphy had his race day routine set up. Eight hours of sleep, for starters.

But on the morning of the final of the men’s 100m backstroke, Murphy was in bed working towards that eight hours of sleep when there was knocking on his door. His cell phone erupted.

Members of USA Swimming were outside his bedroom door, waking him up for an unannounced drug test.

As Murphy penned in a piece he wrote for The Player’s Tribune:

It couldn’t have come at a worse time. In that moment, all I could think about was my race later in the day … and I didn’t know whether I was going to have enough time to get ready in the way that I had planned.

Your pre-race routine should be flexible. It should be able to withstand the surprises.

As Murphy says, you should be willing to “expect the unexpected.”

Expectations guide how you will react, after all.

If you expect things to go perfectly, you are in for a world of disappointment.

One of the key mistakes swimmers make when throwing together a first draft of their PPR is listing things they can’t control. As mentioned, the sheer gangsterism that comes with your routine is that you control it from beginning to end. I

f you start building a list centered around how other swimmers perform, or what the pool conditions are like, or what the weather is like that day, the routine becomes “uncertain” and loses a lot of its potential.

Keep the list of steps and ingredients simple and fully under your control.

At the end of the day what’s happening around you doesn’t matter because everything you have done to get to this point, everything within you, all the hard work, the attention to detail, the skill and talent you have, remains unchanged.

We all experience various amounts of anxiety and pre-race nerves when it comes to competition.

The pre-race routine is a simple way to give ourselves a deep sense of familiarity, even when we are far away from home. Don’t let your races collapse because you caved under the nerves and pressure from competition.

Start putting together a pre-race routine for yourself and plan your way to faster swimming, more often.