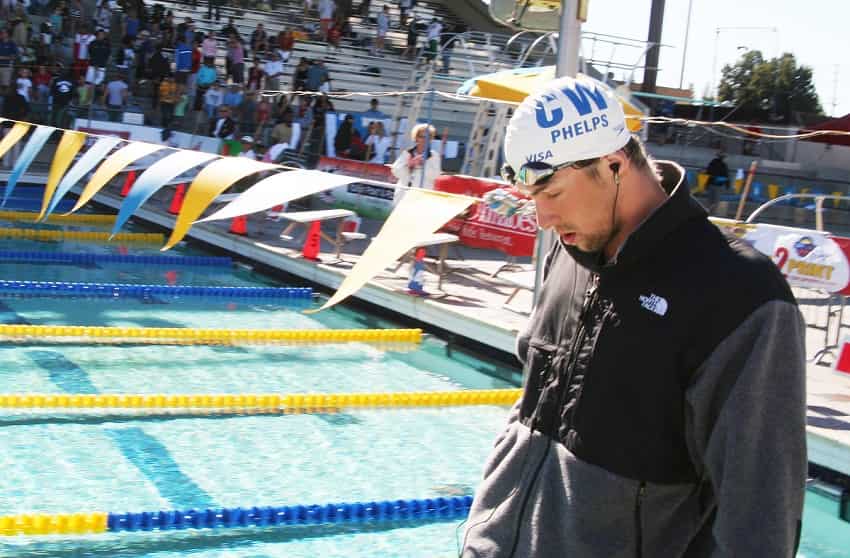 With pools and practices shut down, swimmers have a lot of time on their hands.

Most of it has been productive—the dryland workouts filling my social media feeds has been great to see.

In this new “normal” there are opportunities to better yourself that don’t require the pool.

Below are some of the books that I have been reading during the “break.”

Becoming a better swimmer (and humanoid) isn’t just about swimming faster than ever before. It’s learning about yourself during the journey. A way to better inform your path is to learn the lessons of those who have come before you.

Here are some books for swimmers and coaches to help sharpen your mindset, give some perspective to your own journey and struggles, and prepare you for the challenges ahead.

No Limits: The Will to Succeed by Michael Phelps

I revisited this book, written after Phelps had won his 8-gold medals at the Beijing Olympics, this week for the third time. It breaks down his performance in Beijing, including background on his childhood, when he was bullied and struggled with ADHD.

The main takeaway is that success is never smooth, no matter how effortless the final result may look on television. There will be doubters, haters, setbacks, adversity, and countless moments where you just showed up and did the work.

Champions are Raised, Not Born by Summer Sanders

Summer Sanders is a 4-time Olympic medalist and NCAA champion. Her book, Champions are Raised, Not Born: How My Parents Made Me a Success is an auto-biography that covers Sanders’ journey from water-obsessed toddler to Olympic champion on an ill-fated comeback.

There is plenty to draw from for swimmers and swim parents in this one. The anecdote that stuck out the most was Sanders being so nervous that she quite literally pee’d herself behind the blocks at a big international meet, a reminder that pre-race nerves happen to us all.

Visions of Excellence: The Art of Achieving Your Dreams by Mark Tewksbury

This book by Canadian backstroker Mark Tewksbury, who was one of my idols growing up, was my introduction to visualization and mental imagery.

Like most swimmers, I mentally rehearsed my races when I was an age grouper, but it was this book that really helped me to understand how powerful it could be and how to do it more effectively.

The year before the 1992 Barcelona Olympics, Tewksbury traveled to the unfinished Olympic pool in Spain and walked up and down the pool, behind where he thought the blocks would be, and imagined every aspect of his race. He would win gold in the 100-meter backstroke, the race unfolding the same way he’d imagined countless times.

The Culture Code: The Secrets of Highly Successful Groups by Daniel Coyle

If there was ever a simple blueprint for awesome team culture, this book is it. I wrote out 25+ pages of notes and thoughts while reading the book over the course of a day.

With examples from high-performing teams and distilled lessons that can be applied to your own program, The Culture Code is a high-performance blueprint for team excellence.

University of Texas Longhorns head coach Eddie Reese has achieved unparalleled success on the pool deck. He has won fourteen NCAA titles (so far) and has served on the staff of seven US Olympic teams.

This book, a compilation of quotes, thoughts and insights into Reese’s coaching and teaching style is full of amusing and informative slices of wisdom, not only for coaching champion swimmers, but using the pool to teach valuable life lessons. His approach to culture is simple: “Our philosophy has just been to keep it fun, to keep smiling, and keep laughing.”

Conquer the Pool: The Swimmer’s Ultimate Guide to a High-Performance Mindset by Olivier Poirier-Leroy

I would be remiss to create a list of essential reading for swimmers and coaches without adding my own shameless plug. The book is 300-pages of proven tools and techniques (yup, backed by research and science and stuff), anecdotes from Olympic champions past and present, and worksheets and exercises you can do at home.

Conquer the Pool was written with the input and feedback of 200+ head coaches, Olympians, and NCAA champions. “You are very insightful and present the material in a highly effective manner,” says Don Heidary, Co-Head Coach and Founder, Orinda Aquatics. “It is the best (only real) product for helping kids through the mental side of the sport. Thank you for what you are doing for the sports and for young athletes.”