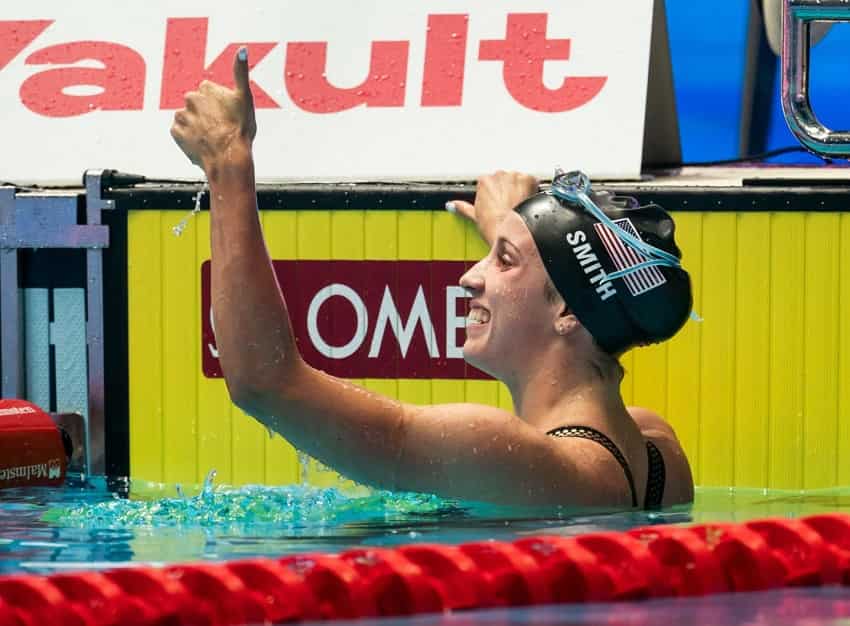 Did you keep up with all the goings on at the FINA World Championships over the summer of 2019?

And then there was Regan Smith.

The 17-year old had been pegged as a serious up and comer, but I am not sure many knew how explosive the trajectory would be.

Including, as it turned out, herself.

Her first race wasn’t until later in the meet, so she had been quietly soaking in all these record-smashing performances. By the time she got up for the prelims of the 200m backstroke, she was ready to rock and roll, swimming a personal best time of 2:06.43.

She was the fastest qualifier out of prelims, and as such, had lane four of the second heat of the semi-finals later that night. That evening in Gwangju, South Korea, her calm, controlled technique took her out under world record pace.

The smoothness of her stroke hides how fast she is flying.

It takes until the 150m mark for the spectators at the pool and the commentators to realize what is unfolding in front of them.

Smith has turned at 0.32 under world record pace and is not slowing down.

She accelerates down the final lap, body lengths ahead of the field, which includes two-time world champion in the 100m backstroke, Kylie Masse.

The world record line, super-imposed on the coverage of the event, continues to lose ground as she sails under the backstroke flags. She throws her arm back, hits the wall, and the place erupts.

Smith has swum a world-record shattering 2:03.35. Over seven tenths of a second faster than Missy Franklin’s 7-year-old mark.

But for half a moment, Smith doesn’t know this yet. Looking at the scoreboard, which is on the far side of the pool, Smith’s mouth goes agape.

“Oh my God,” she says. She looks around, covers her mouth with her hand. 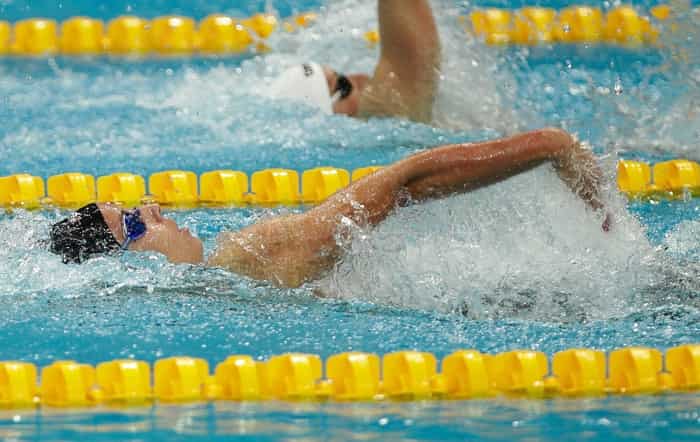 The disbelief is still there when she interviewed after her race.

“I never thought I would be able to go something like that,” she said, still dripping.

The time is insane.

And a personal best time by three seconds. From that morning. But remember—this was only the semi-final.

The next night, for the championship final, she has another crack at it.

Again, she flies out to an early lead. This time, even faster. At the 100m mark, she turns in 59.40 to the foot. Almost a second faster than she did the night before. To give some perspective as to how fast this was, the split would have made the final of the 100m back earlier that week.

She has a two body length lead at the 150m, turning over 8/10’s of a second ahead of her own world record pace. Having learned their lesson the night before, the place is on edge, cheering and yelling and screaming from the edge of their seats.

She runs out of steam in the last 10m, touching just a shade over her WR to win gold. Even though she swam just slightly over her semi performance, for me, this swim was even more impressive.

(And maybe even more note-worthy than the world record she would set in the 100m backstroke on the final night of the meet, leading off the medley relay for the US women.)

Not to take anything away from the other performances, but there was something that really stuck with me from Smith’s 200 back.

Until the day before, I doubt there was a swimmer on the planet who even considered taking a 200m backstroke out in under a minute at the 100.

Quite suddenly, now it very much is.

And because someone has done it once, someone else will realize that maybe they can do it too.

Your limits are only limits until you choose to redefine them.

These moments in the sport serve as massive, sometimes stunning reminders that limits are there to be broken.

What we think is possible is just a construct of our imagination.

For a long time breaking 15 minutes in the mile was considered physically impossible. Until someone did it. And then someone else. And then a whole bunch of other someone elses.

We don’t really know the limit. We rarely know what we are completely capable of. And we unfortunately rarely allow ourselves the freedom from the fear of failure to put ourselves out there and try.

So what does this mean for the rest of us? Should a limit-busting attitude be reserved only for a handful of the world’s best swimmers?

You can adopt this mindset too:

Be relentlessly curious about redefining your limits.

Olympic Champion Tom Dolan: Adversity is Confidence in Disguise. He became one of the greatest medley specialists in history on the back of exercise-induced asthma and a windpipe that made it difficult to breathe. Here’s another reminder that adversity can be your biggest tool for success.

Caeleb Dressel: Carry a Big Kick and Bigger Goals. Dressel has repeatedly pushed the limits of what is possible in the sprint freestyle and butterfly events. His goals, as it turns out, are bigger than most realize.