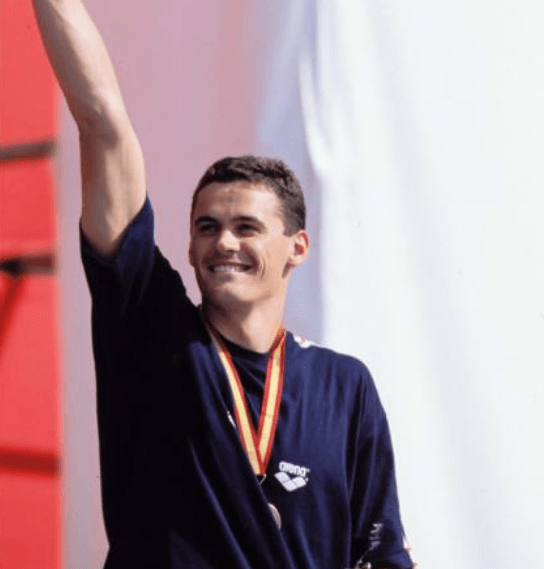 Between Matt Biondi and fellow American Tom Jager the pair held a stranglehold on the splash and dash after its entry into the Olympic program in 1988, with the pair breaking the world record a combined 9 times between 1985 and 1990. (While Jager also became the first man to break the 22 second barrier).

The U.S. siege of the sprint races officially ended in Barcelona in 1992, when Russia’s Alexander Popov laid waste to the American men, winning both the 50m and 100m freestyles, announcing a change of the guard that would last for an unbelievable 10+ years.

The following year Popov, a former backstroker who’d been coaxed into giving freestyle a try, moved down under, following lifelong coach Gennadi Touretski in his new position at the Australian Institute of Sport in Canberra. There the pair would work for a decade, cementing one of the strongest legacies in swimming history.

Popov was originally designed to be a counter for Biondi in the relays. The Russians at the time had a solid front three, but no matter what kind of advantage they garnered, Biondi, nicknamed the California Condor, would sweep in and erase it.

As it turned out, Popov would become more than challenger, but successor. (Perhaps not surprisingly, Touretski also used Biondi’s smooth, efficient freestyle as a blueprint for Popov’s stroke. Talk about the student becoming the master.)

Touretski, who was a bit of a wild card outside of the pool, helped mold Popov into one of the most efficient swimmers to ever grace the water.

Here is how they did it:

1. Swim with perfect technique, or not at all.

Much has been made about Popov’s high yardage, as though using it as an excuse to bombard swimmers with endless meters. But while it appeared as though he was swimming effortlessly (a.k.a easily), those long swims were used to drill in that smooth, near-flawless technique Popov would become known for.

In other words, they were very purpose-drive yards.

He would hone this technique over yardage that would seem preposterous for most sprinters these days, swimming as much as 80-100km over the course of a week. No matter what pace he swam, however, between him and Touretski they were adamant that every meter be covered with flawless technique.

SEE ALSO: 3 Tips to Improve Your Distance Per Stroke

2. The fastest swimmer is the one who slows down the least.

In our rush to swim harder, stronger and better we ignore perhaps the most fundamental truth in swimming fast—the one who swims quickest is simply the one who loses the least amount of velocity going into the wall.

Understanding this, Popov was very conscious of his arm and hand placement while in practice, always seeking to be as efficient as possible.

At the end of the race, when everyone is feeling gassed it isn’t necessarily the fittest swimmer that will get to the wall first, but the one who is swimming most efficiently.

To further beat on the efficiency and drag drum it is critical to understand that the faster you go, the greater drag acts to slow you down.

During his long and steady swims, Popov would play around with his stroke and technique, looking for areas where his hand might be slipping, or where he could pick up just an extra fraction of drag reduction. He understood that you had to be able to find the drag in your swimming at slow speeds, before you maxed out the speed.

Dial in your stroke and technique at slower speeds and slowly ramp up the speed so that you continue to enjoy the effects of minimal resistance at top end velocity.

One of Touretski’s approaches for readying the big Popov for the important international meets on the calendar was to have him race.

On average, in the years following Barcelona Popov was getting about 100 races in per year. (Essentially two races a week.)

The repeated efforts gave Popov the experience necessary to be ready for whatever when it came to race time, something that is very apparent given how thoroughly and consistently he dominated the international sprint scene for nearly a full decade.

By getting the starts in he worked on his starts, turns and race-pace swimming in race-like conditions so that he wouldn’t have to get ready, he would simply be ready.

Although Popov wasn’t a chest-thumping guerrilla behind the blocks, instead preferring the stoic, Iceman approach, there is no denying the guy had a killer instinct. Mental toughness and unwavering confidence, particularly in the Alpha-male, testosterone-fueled sprint events is a must, and Popov had it in spades.

After Biondi left the sport, another American rose to take his place—Gary Hall Jr. There was no love lost between the two, with Hall placing second behind Popov in Atlanta in 1996 in the 50 and 100m freestyles.

The following year the two engaged in a rather heated exchange through the media, with Popov saying of Hall and his father, two-time Olympic medalist Gary Hall Sr., “His father was never an Olympic champion, and he never will be either. It’s a family of losers.”

Well, then! Popov was even more merciless when it came to describing how he viewed up and comers:

“If I see any (challengers), I have to swim faster and make them feel sick. If they have a little potential, you must get on top of them and kill that enthusiasm right away so they will lose their interest in swimming.”