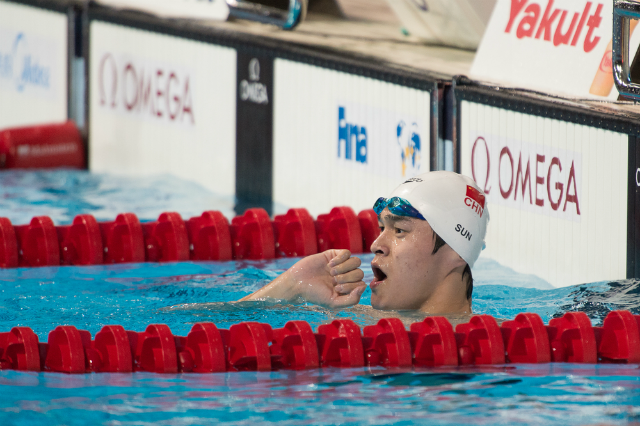 1500m freestyle world record holder and defending Olympic champion Sun Yang of China has had his endorsement ban finally lifted today according to Chinese news sources. Yang had been training back at the Zhejiang College of Sports since the end of March, but the Chinese superstar is now also eligible for “commercial events” after he was pulled over for driving without a license last fall. Yang had also been previously banned from training and competition, but those were pulled back last month.

“Sun has been following the regulations and well behaved in the past month. So the college decided to lift the ban and allow him back to commercial events,” read a statement that was released by the Zhejiang College of Sports. Yang was suspended without pay since the run-in with the fuzz in November.

The lifting of the final piece of the suspension comes a month ahead of the National Championships where he will compete in the 200, 400 and 1500m freestyles. Later in the year Yang is also expected to compete at the Asian Games in South Korea at the end of October. Although for most westerners the competition barely registers a blip on the international calendar, for the Chinese it is the showcase for their athletic programs.

The reinstatement also comes packing with a coaching change. One of Yang’s long term coaches, Zhu Zhigen has resigned due to cited health concerns.

Former national coach Zhang Yadong, who was at the helm of the national team during the hosted 2008 Olympics, where they won one gold, three silvers and two bronze, will take on coaching duties for Yang. After leaving his post as top dog with the national swim team he took on a supervising position at the College of Sports in the Zhejiang province.