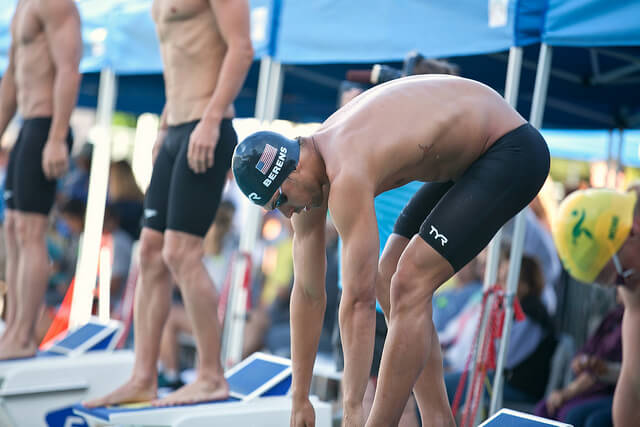 Last year I wrote a piece for SwimSwam about Bill Pilczuk, an American sprinter who dethroned Alex Popov, possibly the best sprinter in history, at the 1998 World Championships in the 50m freestyle.

Pilczuk’s story was atypical in a lot of ways for an elite level swimmer.

He wasn’t bombarded with NCAA Div 1 offers, and while he was among the top 10 sprinters in the world during his 20’s, he would place 3rd in the event at both the 50 freestyle at both 1996 and 2000 Olympics Trials, meaning he never repped the U.S. at the Games.

But in 1998, in Perth, he would blast out with an absolutely unbelievable start that leveled the field, leaving everyone to try and play catch up.

Pilczuk would win in 22.29 ahead of Popov and hometown favorite Michael Klim.

Here is the video from that race:

It hasn’t been easy for Bill. It’s been something he’s had to work very hard at. He didn’t have the financial support and raw talent of the typical championship swimmer. If he doesn’t accomplish anything beyond winning a world title, he’s already beaten the odds.

In researching the piece (which you can read here), there was repeated mention of Pilczuk working on his start a lot.

When I asked him recently– he is now a coach for the men’s and women’s program at Savannah College of Art and Design in Georgia– what “a lot” meant, here is what he had to say:

To give you a rough estimate of what working on starts a lot meant… Some days, when the 15m pool was open, they’d have to tell us to leave because we wanted to break the record of the pool in every stroke.  Maybe 50 on those days.  We would do at least 10 runners and 20 starts a day throughout a workout.  Dean [Hutchinson– he was team captain senior year at Auburn] and I would stay after and get about 10 on our own every single practice.  We had to duck tape our back toes because the grip tape tore the skin off.

Now a coach, I asked Pilczuk if he would like to share some tips on how the rest of us can improve our starts.

Without ever stepping foot on a block, you can improve your potential for a great start through flexibility training.

The ability to find the best joint position for your body size, is key for an optimal start. Learning a great start requires you to have the ability to manipulate your body on the starting platform to get into the most powerful position.

Many swimmers can only get into one position due to a lack of flexibility in their plantar flexors, knee and hip extensors and low back muscles.

When a coach tries to help the athlete find a better angle or stance, or the athlete tries to relax in the set position, they are unable.

Once you have achieved better flexibility, you will be able to manipulate your center of gravity on the block with your joint angles.

In general, your feet will be just inside shoulder width apart – think where you would put your feet before trying to dunk or block a spike.

Now step back with one leg to a distance that puts your center of gravity in your control – usually stepping back twice the length of your foot staying on the balls of your feet.

Your hands grip the block at shoulder width with palms not resting on the platform. Practice changing your hip angles, knee angles and foot position.

Once you find the perfect, balanced stance, and have a good grip on the blocks, you need to concentrate on the pull of your arms against your back leg.

Pulling on the block allows you to increase your power by using your arms and legs to create momentum. If the block is slightly loose, it should rock back with the force of the pull like a see-saw.

The arms not only help to increase your power, but help to keep your center of gravity moving in a straight line off the blocks, instead of a rainbow.

After you pull/push, your front toes should be over the lip of the block, ready to continue your line-drive off the blocks, extending horizontally forward.

Kind of obvious, but at no time in a swimming race will you come close to the speed you have in the first 5m of a race because of water’s resistance.

The goal of a start is to develop as much power as possible off the blocks, and hold the speed you develop in the air into the hole and up through the breakout. Think of a rock skipping across the water or a spear hitting the water. The angle each hits the top of the water, will determine how fast it will travel and where it will go.

Your angle of entry will vary depending on body size, but the goal is to keep your speed off the block underwater and through the first full stroke cycle.

** A big thank you to Bill Pilczuk for taking the time to share this information. You can stay up to date with his program at the SCAD Athletics website.