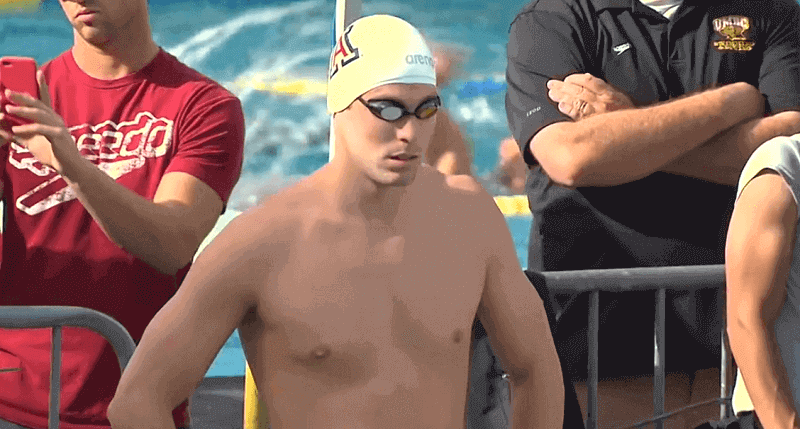 If you follow NCAA swimming by now you have seen the University of Arizona’s Brad Tandy launch himself off the starting blocks like an intercontinental ballistic missile.

His explosive start and underwater dolphin kick into a devastating breakout landed him on the top of the podium at the NCAA Division 1 championships last year, as well as winning him a handful of Pac-12 titles.

To dominate on the NCAA level is one thing, but Tandy showed that he will be a force to be reckoned with in the long pool as well.

At the recent Santa Clara Grand Prix, Tandy, swimming next to 100m freestyle Olympic champ Nathan Adrian, let his start do the talking when he exploded off the blocks and emerged visibly ahead of a field that was utterly and completely stacked.

You had 2000 Olympic champ in the event Anthony Ervin, Brazilian Bruno Fratus (who trains out of Auburn and at this point in 2015 has posted the world’s third fastest time in the event clocking a 21.74 at the Maria Lenk Trophy), the Russian lightening bolt Vlad Morozov (2nd in the world so far), Brazil’s Marcello Chierighini, and another speedy Russian, Nikita Lobintsev.

Even though the field would reel him in, with Tandy placing fourth in a time of 22.28, you can’t help but feel awed at the sheer power he demonstrates over the first 25m of the race.

Tandy, who stands at 6’3 popped up and significantly ahead of Adrian, who has one of the most powerful starts in the business. Not too mention that Adrian has a 3-4 inch height advantage on the Wildcat, who is originally from South Africa.

Off the start you notice a couple things with Tandy:

Here is the race video from the Santa Clara Grand Prix:

Tandy’s Start at the NCAA Level

Here is also another video from the Pac 12 championships, which Tandy won the 50 yard freestyle in a time of 18.80.

In a similar situation is the above video, Tandy explodes out to an early lead with a dominant start/breakout and turn.

Recently The Race Club, whose head coach Gary Hall Sr. collaborated with us on our underwater dolphin kicking guide, posted an awesome video of Tandy and his start.

Tandy is filming a series of webisodes for The Race Club (click here to see their YouTube channel–tons of great stuff), and they uploaded the slow motion rocket launch of Tandy’s start below.

The swimmer next to him is Mike Alexandrov, two-time Olympic breaststroker, who we have worked with a few times on guides for breaststrokers (improve your breast kick, breaststroke pull, and a couple breaststroke sets).

Flying Mongoose vs. The Bulgarian Bullet @bradtandy vs. @alexandroviews Which is faster?