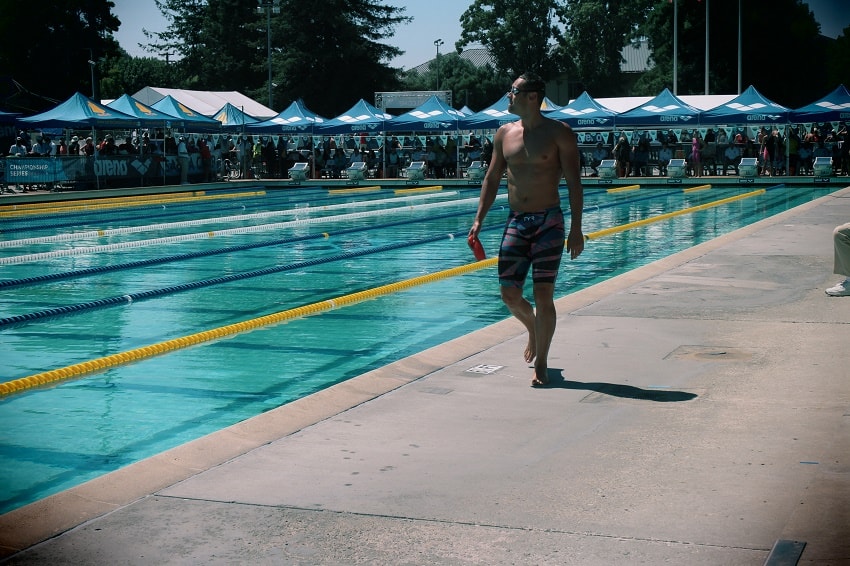 This is a guest post by Mike Alexandrov, two time Olympian and NCAA breaststroke champion. Mike stopped by to share a breaststroke drill progression designed to improve your breaststroke pull from top to bottom. Game on.

The breaststroke pull has three phases:

When trying to master each of those phases of the stroke, it is important to break them down individually.

You want to work on 3 separate 25’s, for example, for the 3 separate drills described below, in order.

The ‘wind-shield’ wiper drill is my favorite drill here.

Try to work on balance and keeping the feet up by tightening the body’s back core muscles. The main part of the drill is to work on the out-sweep of the forearms, and then float forearms back together in front of you.

I call it a wind-shield wiper drill because the forearms will act as the wipers. Envision a freight truck which sometimes has the wipers suspended on the top of the windshield rather than the bottom (like most cars):

This drill (which refer to as the “Y” drill), happens at the part of the stroke where the out-sweep transitions to the in-sweep.

This part is crucial in holding on to as much water as possible to get some lift and to get ready for the 3rd phase of the pull, the recovery of the arms (getting set up here, again the legs are not doing anything, but floating as in the former drill).

This is the ‘forward thrust’ that I am referring to.  To prevent a slow recovery of the heels, make sure to ‘snap’ and make it an explosive movement. The arms stop at the end of the the in-sweep as you take a breath and the hands are in front of your head. At this point, the heels have reached the height of their recovery (hopefully the hips).

Related: How to Fix and Prevent Breaststroker’s Knee

Repeat until you get to end of 25, resetting at a surface float and arms positioned at the ‘Y’ at a dead-stop each time:

After working out the Y drill we put it all together by adding the kick.

I am not going to focus on specific kick technique here, but rather emphasize an importance on heel speed and making sure the kick is completed as the hands re-enter the water and you go into the glide-phase of the stroke.

Leaving off where we left off at the Y drill, use the explosiveness of the forward thrust of the hips combined with the height of the upper body in the water to shoot the arms forward and kick.

The entry of the hands back in the water should be simultaneous to the finish of the kick. Very importantly, you want to have the hands recover over the surface to reduce drag. We want to think of the arms having a more similar motion to a speedboat, not a barge ship.

Finish the kick as the arms squeeze the head in tight streamline and glide as far you can until you come to a complete stop. Repeat until you get to end of 25, resetting at a surface float and arms positioned at the ‘Y’ at a dead-stop each time:

Props to Mike for stopping by and sharing his insight and experience. Make sure to follow him on Twitter, and if you are searching for personal training services in the Los Angeles area Mike and the people at Lynx Fitness have you got covered.