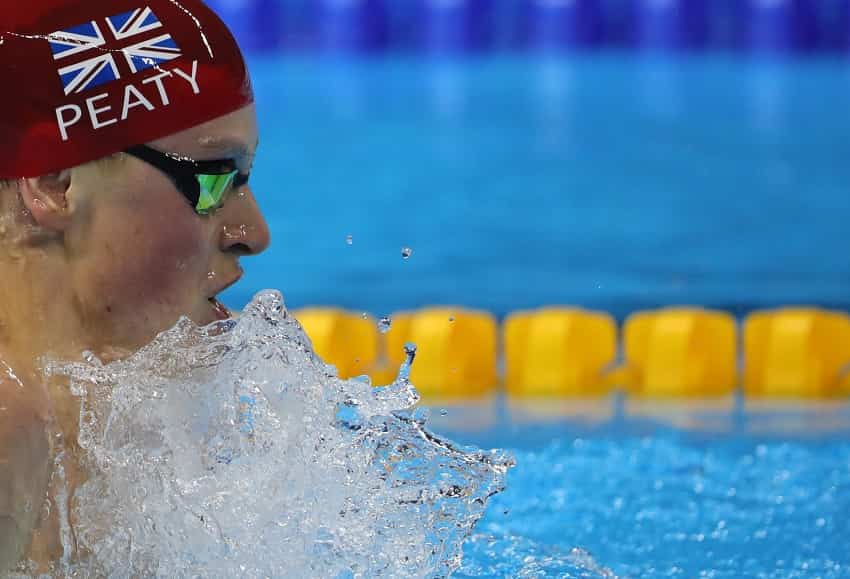 Here’s how to swim breaststroke faster with a couple of Olympic breaststroke champions and Olympic coaching legends.

Breaststroke is the first swimming stroke on record, with drawings dating back to the Stone Age depicting people swimming with a frog-like kick carved into rock walls.

For a lot of us swimmers, even experienced competitive swimmers, it’s also the hardest one to really get a hang of.  The stroke itself looks simple. Scull with your hands, turn out your ankles, and kick backward.

But the unique flexibility demands, sense of timing, and body positioning required to swim breaststroke efficiently (which you can sub in for “faster”) are far from easy.

In this guide to swimming faster breaststroke, you are going to hear from some of the best breaststrokers and breaststroke coaches on the planet, sample some research-based advice and tips, and have some actionable ideas and steps to take with you to the pool.

Let’s get all up into each one of these tips. 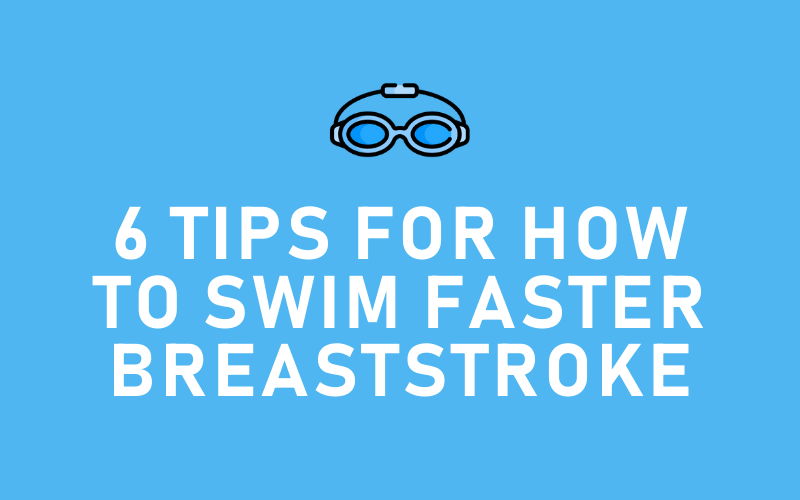 A common training cue coaches will use with swimmers who are struggling with bad body position in the water (and the increased drag that comes along with it), is to ask them to swim downhill.

What does this mean?

Well, it means you are focusing on bringing your hips to the surface of the water to give you the sense that—yup, you guessed—when you are breaststrokin’ along, you have the feeling of swimming downhill.

Nort Thornton, legendary coach at Cal Berkeley (33 seasons) whose swimmers won a total of 14 Olympic gold medals over the years, used this specific point of instruction still to this day.

“The top swimmers develop enough tension in the core to keep the chest slightly lower than the hips in a tight streamline,” he wrote in the Swim Coaches Bible II.

For breaststrokers who come up very high to breathe, this forces the hips to sink down into the water, creating a wider drag profile. Bringing your entire torso out of the water might make you feel like a cobra poised to attack, but your hips and legs are also sinking, creating needless resistance.

The secret to swimming faster breaststroke isn’t getting maximal height with each arm recovery but using your energy to swim forward.

“Any energy devoted to staying higher in the water is energy that is taken away from forward propulsion. Speed can be best achieved by maintaining a straight line,” says Thornton.

One way to help condition better hip positioning is to kick breaststroke on your back. This gives you a greater sense of how it feels to have your hips at the surface of the water.

“Our swimmers do a great deal of our kicking on their backs to maintain the proper body position,” says Thornton. “The hips are on the surface of the water and the knees are at or under the surface.” 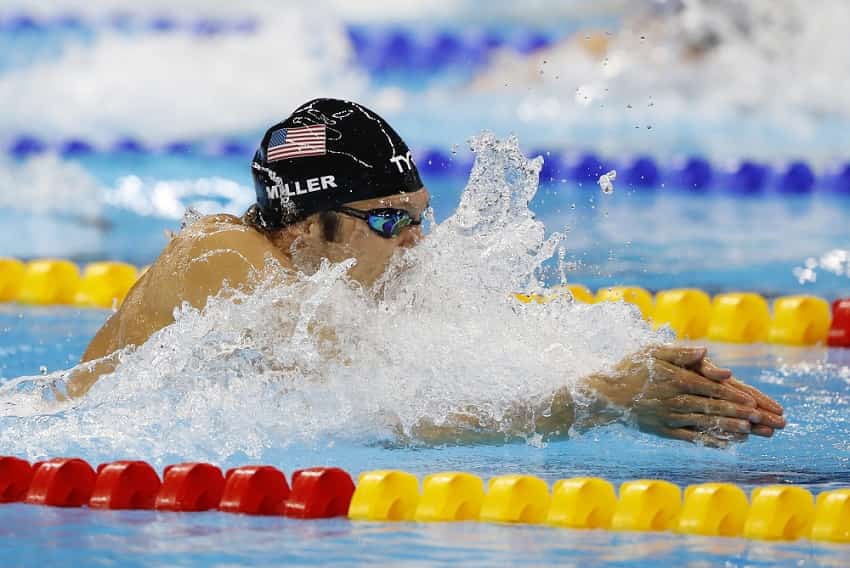 Breaststroke has the unique characteristic of being the only stroke where more propulsion is created by the legs than the arms.

Look around the internet and you will find claims that the kick is 70-80% of the total propulsion of the stroke. Whichever way you want to cut the statistical pie, a powerful and technically killer kick is fundamental to swimming fast breaststroke.

Adam Peaty figures that 70% of the propulsion he generates in the water comes from his kick. And to help power up his kick, outside of the stuff he does in the water, is to strengthen them up with a weight lifting staple—the barbell back squat.

“Barbell back squats are important to build breaststroke power – most of that power is 70% of the stroke,” Peaty told Men’s Health. “A powerful leg kick is required. This move builds muscle in the quadriceps, glutes, lower back and hamstrings.”

4. Flexibility in the knees, hips, and ankles. (But especially the external rotation of your knees.)

Range of motion is a big factor in how well you can swim. No big secret there. If you want to have a dominant breaststroke kick, not only should you be strong, but you should also have the flexibility in your knees, hips, and ankles to perform the kick with a full range of motion.

When researchers took a group of 125 competitive swimmers and had them do a 100m breaststroke kick for a time, the swimmers who had more ankle supination, hip external rotation, and most importantly of all, external rotation in their knees, posted the speediest times.

Spend 10-15 minutes a day doing mobility work, including foam rolling and static stretching, to help improve your ability to drop a powerful kick.

5. The recovery phase of the pull and kick are lightning-quick.

Breaststroke is the only stroke where swimmers come to a near-complete dead-stop between stroke cycles. A quick recovery, both of the legs and the arms, helps shorten this momentum-crushing gap. Uneven propulsion (aka “starting and stopping”) takes more effort and energy.

Here is a sciencey way to put it: 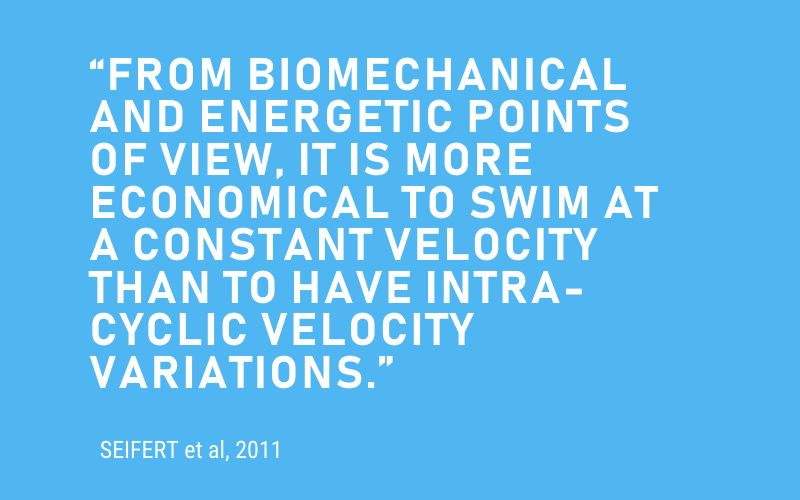 All you have to do is watch Adam Peaty swim a length of breaststroke to see how fast his recovery is. (Interestingly, stroke analysis found that his recovery was so fast that he is almost always in the glide phase the longest compared to his competition.)

It is during the arm and leg recovery that you experience the biggest drop in velocity. So why wouldn’t you make them as short as possible?

Research into international-level swimmers backs up this piece of what should be common sense. How fast you recover, and how fast you recover relative to the how long it takes for you to take a stroke, are shorter for elite swimmers compared to the not-so-elite.

“Every breaststroker at the highest level in the world right now has a crazy fast recovery,” says Cody Miller, Olympic bronze medalist in the 100m breaststroke.

6. Increase your speed into the wall by replacing the standard two-handed touch with flip turns.

Although this tip for faster breaststroke doesn’t exactly make your stroke faster, it will help train you to be faster in and out of the walls, cutting time without having to actually improve your swimming speed.

This top sounds made-up, but many of the top programs swear by it: Instead of using the traditional two-handed touch on the walls, charge into the wall and do a flip-turn. This is something that is commonly seen on pool decks of elite swim programs, including Cal Berkeley and Indiana University.

Thornton explains, “I do not want swimmers slowing down into the walls because of fatigue or crowded conditions at the wall. Using only flip turns eliminated bad habits and increased swimmers’ tolerance for lack of air.”

Some Quick Technique Tips for Breaststrokers

Here are some quick positioning cues and tips that breaststrokers can take with them to the pool to help sharpen their technique, courtesy of Nort Thornton.

How to Fix and Prevent Breaststroker’s Knee. Along with swimmer’s shoulder the breaststroker’s knee is a common injury among competitive swimmers, and also not just limited to breaststroker’s. Here is Michael Phelps’ long-time trainer and USA Swimming high performance manager Keenan Robinson to help you avoid and deal with this specific injury.

How to Improve Your Breaststroke Pull. Here is a breaststroke drill progression that will help you improve your breaststroke pull from top to bottom.

How to Fix the Timing in Your Breaststroke. The timing in breaststroke is a toughie–fortunately we got Jeff Julian, head coach of Rose Bowl Aquatics, to stop by with his favorite drill for improving it.

Olympic Breaststroker Mike Alexandrov’s Favorite Breaststroke Set. More good stuff from Mike–here’s a set that covers all your bases, from power to endurance to speed.