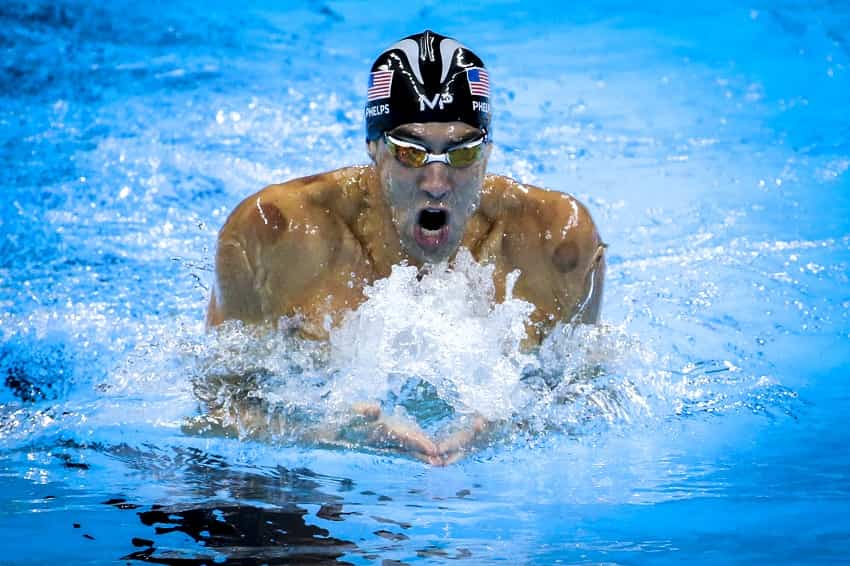 Here is everything you ever wanted to know about the oldest stroke in competitive swimming, the breaststroke.

The breaststroke is one of the four swimming strokes performed in competitive swimming, and in the author’s opinion, the hardest to master.

Sure, the butterfly stroke is exhausting, but the breaststroke, despite its seemingly simple nature, requires a timing between the pulling and kicking motion is challenging to truly get the hang of.

Here is everything you need to know about the breaststroke, as well as a hefty list of resources for helping you swim a better breaststroke, from improving your kick, your pull, to a list of breaststroke drills that will help you improve your breast.

Let’s get our breaststroke on! 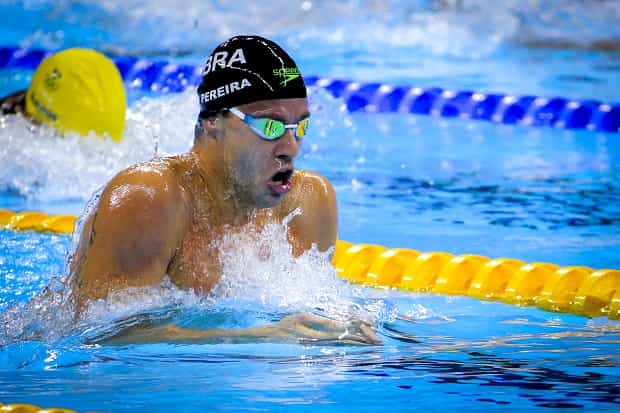 The History of the Breaststroke

The breaststroke is the grand-daddy of the swimming strokes, with its origins going back as far as the Stone Age.

Drawings in an Egyptian cave, appropriately called the Cave of Swimmers, depict swimmers in various poses, with the leg whipping motion believed to having been inspired by frogs. Similar illustrations were found in Babylonian and Assyrian wall drawings.

The first manual on swimming instruction was written by Nicolas Wynman, back in 1538. Back then swimming wasn’t so much about getting to the other end of the pool fast, but more about the whole not drowning and dying thing. In his book, Colymbetes, the German professor outlined instruction for a breaststrokish type stroke.

“Introducing the Finalists for the 440 Yard Breaststroke…”

The first time the breaststroke was raced at the Olympics was in 1904.

Those Games, based in St. Louis, were remarkable for the fact it was the first time the breaststroke was raced, but it was also the only Olympics that was held in yards.

That first breaststroke race was held over a distance of 440 yards.

By the 1930’s swimmers doing breaststroke found that it was possible to speed up their recovery by bringing their arms out of the water. This was the beginning of the fork of the road that would lead to two separate strokes, the breaststroke and the butterfly stroke.

The Underwater Shenanigans of ‘56

During the 1950’s, foreshadowing problems that would emerge for the backstroke and butterfly during the 1980’s and 1990’s, swimmers sneakily figured they could swim faster under the surface of the water.

Masaru Furukawa of Japan, at the 1956 Olympics in Melbourne stayed under the water off the start, and over the first 150m swam the first 45m of each length, on his way to winning the gold medal in the 200m breaststroke in 2:34.7.

Predictably, this new technique led to problems, with swimmers passing out from oxygen deprivation. 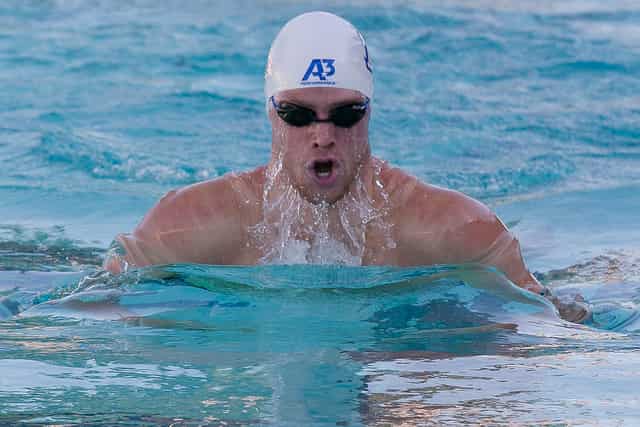 Kitajima and the Dolphin Kicks Heard Around the World

The underwater dolphin kick is the little problem child of our sport, instigating rule changes across all strokes.

It was only a matter of time before it caused problems in the breaststroke, and this happened in 2004.

That summer at the Athens Olympics Kosuke Kitajima of Japan performed a single dolphin kick off of the start and turn, powering him to edge out Brendan Hansen in the final of the 100m breaststroke. Because the kicks were not visible from above the water the officials were unable to disqualify Kitajima, resulting in controversy.

Since then FINA has amended the rules to allow a single dolphin kick on the breakout. The swimmer can perform this kick at any point during the push off and pull-out.

Who are the top breaststrokers of all time?

The Different Styles of Breaststroke

Through much of the 20th century it was thought that the fastest way to perform the stroke was to swim as flat as possible.

But during the 1970s the stroke began to evolve, with swimmers adopting a more undulating style that more closely resembles how today’s breaststrokers perform the stroke.

This new type of breaststroke, more commonly known as the “wave” breaststroke, was popularized by ISHOF-inductee Joszef Nagy, who coached Mike Barrowman (USA), Sergio Lopez-Miro (SPA), and Annamay Pierse (CAN) to world records and Olympic gold.

Adam Peaty of Great Britain has since revolutionized the way sprint breaststroke is performed. With a stroke rate that is out of this world Peaty powered his way to a 57.13 at the Rio Olympics. No one has swum within a second of this mark in history.

How to Swim Breaststroke

The breaststroke is the slowest of the four strokes. The reason for this is the large fluctuations in speed between sections of the stroke.

Although breaststrokers can generate great power and speed through the pulling motion, and even when kicking through the arm recovery, the leg recovery causes a near complete arrest in propulsion.

It’s like each time the legs recover the swimmer is throwing the hand-break on while trying to speed across the pool.

As a result, although it might look like an easy stroke, breaststroke requires great strength and stamina in order to get back up to speed with each stroke cycle.

Here are some tips for how to swim breaststroke from Sergio Lopez-Miro, Olympian and associate head coach at Auburn University:

There are two different ways to do the pulling motion:

The pressing down pull is more efficient for short course sprint events, while the turning-pressing out pull is best for longer short course breaststroke events (the 200, plus 200-400 IM) and long course swimming.

When breathing during the stroke cycle hold your breath until you are about to break the surface of the water, exhaling all at once right before you pick your head up. Holding your breath for those extra few moments will help give you more buoyancy in the water.

When breathing squeeze your shoulders and bring them up to your ears. To insure that you are throwing your body forward through the water imagine yourself rotating your shoulders over your ears.

Use your hands to aim for where you want to lunge your head. Your hips will follow your head, so aim to “jump forward”, bringing your hands just below the surface of the water.

The breaststroke kick is an unnatural movement, requiring athletes to have significant flexibility in their ankles and hips in order to turn the feet in a dorsi-flexed position at a 90-degree angle in order to create thrust.

6. Timing the pull and kick motions.

The kicking motion begins just after the swimmer has completed the pull. The kick accelerates and powers the lunge of the arms and the head into the next stroke cycle.

Over the past couple years we have put together a fair amount of awesome content for breaststrokers, including drills, workouts and sets from Olympians and head coaches from across the United States.

Here are our top resources for helping you swim better breaststroke:

How to Improve Your Breaststroke Kick. Two-time Olympian Mike Alexandrov shares a set of breaststroke kicking drills (including video demonstrations) that will help you improve your kicking technique.

How to Fix and Prevent Breaststroker’s Knee. Along with swimmer’s shoulder the breaststroker’s knee is a common injury among competitive swimmers, and also not just limited to breaststroker’s. Here is Michael Phelps’ long-time trainer and USA Swimming high performance manager Keenan Robinson to help you avoid and deal with this specific injury.

How to Improve Your Breaststroke Pull. Here is a breaststroke drill progression that will help you improve your breaststroke pull from top to bottom.

How to Fix the Timing in Your Breaststroke. The timing in breaststroke is a toughie–fortunately we got Jeff Julian, head coach of Rose Bowl Aquatics, to stop by with his favorite drill for improving it.

Olympic Breaststroker Mike Alexandrov’s Favorite Breaststroke Set. More good stuff from Mike–here’s a set that covers all your bases, from power to endurance to speed.