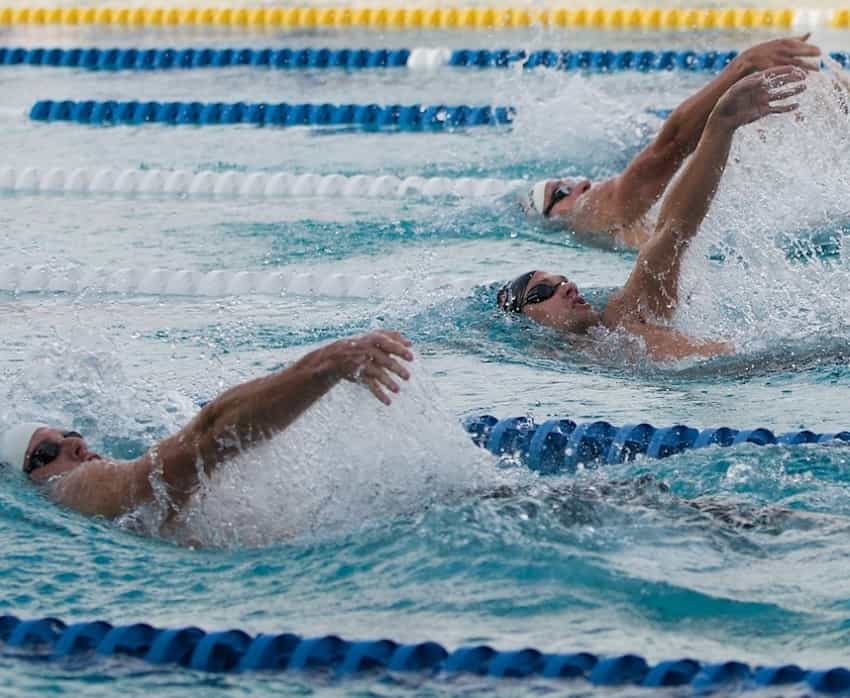 Here is everything you ever wanted to know about the backstroke, from its history, how to swim it properly, and much more.

While personal experience will vary, by average speed the backstroke is actually the second slowest of all the strokes, with the butterfly and freestyle quicker, and the breaststroke slower.

The backstroke is similar to the freestyle (or front crawl), in that the arm pulling motion alternates, and there is a flutter kick (albeit inverted) to aid in propulsion.

In this overview of the backstroke we are gonna get into it all, including:

The History of the Backstroke

Backstroke was undoubtedly first contrived by a poor swimmer who was simply exhausted from trying to crawl and turned onto his back and realized he or she could much easier breathe and still maintain some propulsion.

Who that person is, we will never know.

In terms of organized competition, the backstroke has been around since nearly the beginning of the modern Olympic movement, with a 200-yard back race held at the 1900 Olympics in St. Louis. (This was the only Olympics that was held in a short course yards pool.)

Another seismic shift occurred in the late 1980’s, when a group of swimmers, led by David Berkoff and Daichi Suzuki used the underwater dolphin kick off the walls and turns to repeatedly lower the world record in the 100m backstroke.

During the 1988 Seoul Olympics both swimmers would swim nearly 30m underwater on the first lap on their way to the medal podium. FINA would change the rules shortly afterwards, limiting the amount that backstrokers could kick under the water off the starts and turns.

The below video is of the 100m backstroke final from Barcelona, with Jeff Rouse (USA) and Mark Tewksbury (CAN) dueling it out.

This was the first time in Olympic competition that the backstrokers could flip turn at the walls without requiring to have a hand on the wall.

The backstroke is the only of the four swimming strokes where the athlete starts from in the water. Backstrokers hop into the water when the referee blows the first whistle, grab a bar on the starting block and plant their feet on the wall, usually covered with an electronic timing pad.

The special problems by this form of starting are immediately apparent—trying to plant your feet on a wet timing pad, and then exploding off of it with all your might is not easy. Even accomplished and elite swimmers were prone to slipping on the start, immediately taking them out of the race.

The slipperiness of these pads—and a desire to help backstrokers speed up the start a little bit—led FINA in 2013 to (finally) approve small wedges that the swimmers could use to plant their feet on the start.

Who are some of the best backstrokers of all time?

The United States has thoroughly dominated the backstroke events on the international level, with the US men sweeping the 100 and 200m events at the past three Olympics.

Ryan Murphy (USA). The current backstroke king, he won both backstroke events at the 2016 Rio Olympics, carrying on the American tradition of backstroke dominance. He would also break Aaron Piersol’s 2009 100m back world record of 51.94 leading off the medley relay on the final night at the Rio Games.

Aaron Piersol (USA). As a 17-year old Piersol placed second at the 2000 Sydney Olympics in the 200m backstroke, an event he would go on to dominate for nearly a decade, breaking the world record in the event 7 times. The time he set in 2009 at the FINA World Championships (dubbed the “Rubber Suit” Games) still holds today, a result of 1:51.92. Piersol retired in 2011 with five Olympic gold medals, sweeping the backstrokes in 2004 in Athens, and winning gold in the 100 in Beijing.

Lenny Krayzelburg (USA). During the late 1990’s, before Piersol stormed on the scene, it was Lenny Krayzelburg who was the dominant backstroker on the international stage. He would set numerous world records, including four Olympic gold medals, and was USA Swimming’s athlete of the year from 1997-2000. These days Krayzelburg runs a popular swim academy that has locations across the United States.

Mark Tewksbury (CAN). I added Mark to the list because he was one of my idols growing up. He won gold in the men’s 100m backstroke at the 1992 Olympics, and every time I saw him on deck at nationals he would always have time for an autograph and a picture (and even gave me a Speedo shirt after he broke a short course world record along with his University of Calgary teammates in the medley relay). Until Penny Oleksiask’s gold medal in Rio Tewksbury’s gold was the last won by a Canadian swimmer.

Krisztina Egerszegi (HUN). Known as “Mighty Mouse” for her quiet, diminutive nature, she ruled the 200m backstroke, winning the event in 3 consecutive Olympic Games from 1988 to 1996. Her world record mark of 2:06.62 broke the existing WR by nearly two seconds, and lasted for 17 years until finally being broken by Missy Franklin of the United States.

How to Swim Backstroke

Backstroke is one of the easiest strokes to learn, and one of the hardest to master.

Here are some basic technique tips for backstroke swimmers.

Your face should be pointing straight up. The natural instinct when doing backstroke is to look around. We are curious beings after all–What’s going on over there? How about over there? How fast is Bobby in lane 2 going? Your head shouldn’t rotate to the sides along with your shoulders. Missy Franklin demonstrates a super simple way to reinforce this habit—the water bottle balance—that helps her to keep a straight head position in this drill. When you keep your head straight, face facing up you swim straighter and faster.

Relax your neck. This goes in line with what we were just talking about—a lot of time when watching young backstrokers I will see them tuck their chin, which has the effect of their head picking up, bringing them out of alignment. When you are cruising along, swimming your gorgeous looking backstroke, remember to keep your neck nice and relaxed—it will better help you to keep a straight line from your head down your spine. This positioning keeps your profile in the water low (less drag=more speed), and also keeps you relaxed and feeling smooth in the water.

Keep your ankles relaxed when kicking. Why do loose ankles matter? Because when we are kicking the goal isn’t to push water up or down—it’s to push water back. That’s why elite swimmers have supremely flexible ankles—in the same way that you want to have an early vertical forearm in your freestyle pulling motion, you want to plant the top of your foot and push the water back.

Your thumb leaves the water first, gets back in last. At the beginning of the arm recovery turn your palm so that it is facing your hips. As your arm comes up and over you, rotate your arm so that your pinky enters the water first above your head.

Your knees shouldn’t be breaking the surface of the water when kicking. Beginner backstrokers tend to kick from their knees—your kick should originate from your hips, sending a smooth, whip-like ripple down through your toes. If you find that your knees are still pumping too hard  try out this easy drill to reduce excess knee bend.

Hip rotation is okay. Perfectly flat hips when swimming backstroke is hard, and will limit your shoulder rotation, which will leave you with a very shallow pulling motion. A little bit of hip rotation is not only okay, but will help you power your shoulder rotation, which will help you effect more torque on your pulling motion. Of course, the tricky part is swimming the line between too little and too much hip rotation.

We have published a fair amount of backstroke-related content over the years. Here are some of our favorites.

7 Struggles of Being a Backstroker. Sure, the stroke looks easy, but it comes with its special set of problems, from incorrectly set-up backstroke flags to trying to pass other swimmers.

Missy Franklin’s Favorite Backstroke Drill: The Water Bottle Balance. All you need is a water bottle and a little bit of patience and you will be on your way to a better, more technically proficient backstroke with this drill.

How to Fix Excess Knee Bend in Backstroke. Want to clean up your backstroke kick? Start with this kick drill you can do with the help of your kick board.

Missy Franklin: The Training of an Olympic Champion. The current world record holder in the 200m backstroke, she hit the swimming world by storm in a big way in 2012. Her longtime age group coach, Todd Schmitz of the Colorado Stars, talks about how he developed the young Franklin into the superstar that she is today.

The Ultimate List of Swimming Workouts. Our ever-growing database of swim practices for competitive swimmers, including sets and workouts from some of the top swimmers and coaches on the planet.