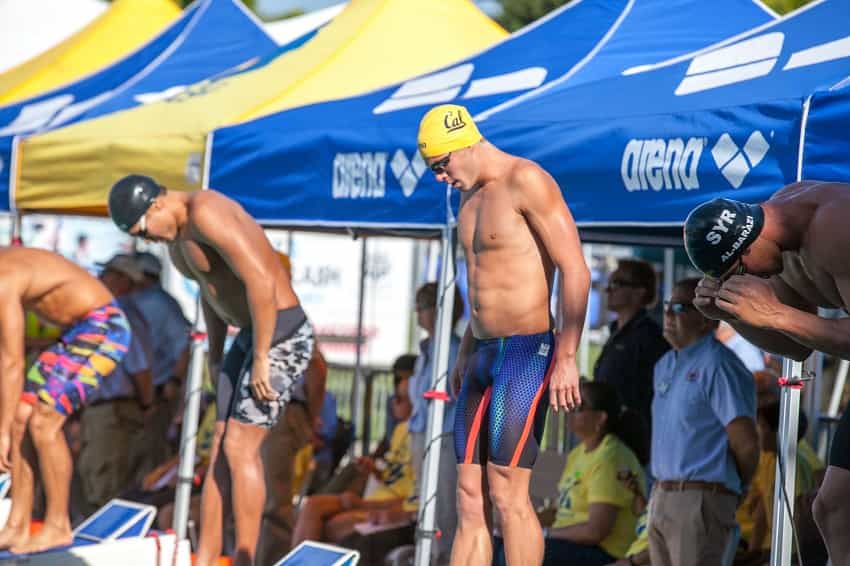 Here is everything you need to know about tech suits: from their controversial history, how fast they actually are, as well as resources for finding a tech suit that matches your goals.

In this ultimate guide to tech suits we are gonna cover it all:

A Quick History of Why We Are Obsessed with Tech Suits

In the summer of 2009 something unprecedented happened.

Over the course of a week in Rome that July 43 world records would come tumbling down in a record-smashing spree that set the swimming world completely on its head.

No longer was it about swimming speed—suddenly the tech suit was the thing winning the medals. Swimmers like Michael Phelps, fresh off his decimating performance in 2008, were being handily beaten simply because he wasn’t wearing a super-suit.

Paul Biedermann’s 200m freestyle was perhaps the most excruciating example. He dropped 4 full seconds in less than a year to swim a 1:42.00, a time that still stands.

Which, if you think about it, is completely insane.

Most 12-year olds would be ecstatic to drop that kind of time in the span of a year, never mind an international-caliber athlete.

Besides those records perhaps the most enduring legacy of the “Plastic Games” was the startling realization that the swimsuit could make or break a race.

Nearly overnight everyone realized that in order to compete they had to get their hands on one of the super-suits if they had any hope of winning against those who were rocking out the rubber suits.

After the Rome debacle FINA got off their butts and instituted an “approved” list of suits that limit materials and sizes—most specifically jammers for men.

Although the impact of suits have diminished since then, the collective memory of how much of an influence they had on performance has persisted ever since.

It’s why to this day it’s not uncommon to see a full heat of 11-year olds rocking $400 tech suits at your local age group meets.

The Psychological Edge of Tech Suits

Before we get to the physiological benefits of the suits, it’s worth talking about how much of a role they play mentally.

Opening the packaging and pulling out a tiny piece of material engineered by space scientists has the undeniable effect of making your feel like you are putting on a cape. Or a jetpack. Or a shield.

Anyone who puts on a jammer or a women’s tech suit will immediately tell you that they feel faster in the water. For men it can be the, ahem, compression effects of the pelvic area that helps make you feel like you have a slimmer profile in the water.

The psychological effect can be a double-edged sword, however. 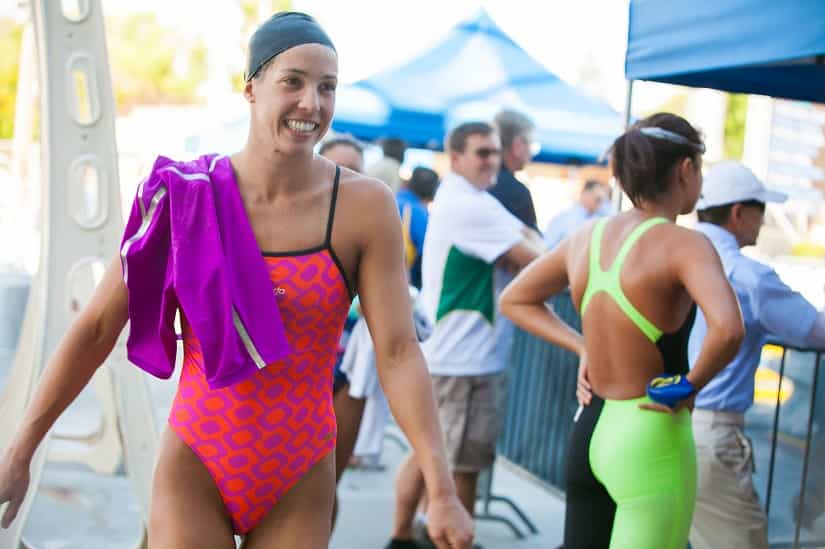 A swimmer can put on a $400 tech suit and be filled with misplaced confidence that the suit will magically make up for missed training and shoddy technique.

On the other hand, it can give a well-trained swimmer the belief to know that they have covered all of the bases when it comes to preparing.

One thing is for absolute sure though…

Combine a tech suit with a shave down and it’s pretty hard to deny that the suits in one form or another impact overall performance in the water.

How Much Faster is a Tech Suit Compared to a Regular Suit?

At the end of the day, the tech suit should serve one overriding purpose: to reduce drag in the water.

You should be doing the legwork when it comes to reducing your drag profile through proper technique and encouraging efficiency in every aspect of your swimming.

The Fastskin-3 is claimed to have a 16.6 reduction in passive drag when a swimmer is in a streamlined position, and a 5.2 percent reduction in active drag (swimming at the surface of the water).

The swimmers were measured using a standard swim-suit and compared to a Fastskin-3–and its offspring, the Speedo LZR Racer X— with underwater cameras and a drag measuring system at the InnoSportLab De Tongelreep at the Dutch national swim center in Eindhoven.

The extra efficiency means that you can swim faster, for longer. When testing was performed at Iowa State with some of their athletes the Fastskin found the suit helped improve oxygen economy by 11 percent.

Tech suits have an effect on stroke rate and stroke length.

In a study done with French elite swimmers, the researchers found that a Fastskin suit creates conditions of lower resistance in the water, with the swimmers experiencing longer glide phases and better efficiency in the water. (Conversely, wearing a drag suit causes stroke form to change, including reduced distance per stroke.)

In other words, swimmers could swim faster, easier.

The study also found that the buoyancy effects of the suit were most significant at sprint speeds. Much like how we discussed on this piece on creatine for swimmers, the effects of tech suits on particular swimmers will vary in effectiveness depending on size and technique:

How Tech Suits Are Designed to Make You Faster

The ways that these hyper-suits are able to achieve a lower drag profile comes through a variety of means:

1. Tech-suits are made from water-repelling fabric.

You know how your drag suits are usually sopping and heavy after jumping into the pool? They absorb water like crazy and as a result turn your swim bag into a sopping, heavy mess if you don’t wring them out after practice.

Unlike regular training swimsuits or your cheaper swim jammers, tech suits are designed with materials that don’t absorb water. They are hydrophobic. (And no, I didn’t just make that word up.)

The science on the effects of compression is a bit of a mixed bag.

One study of volleyball players showed that compression shorts aided in explosive 1-rep power, while another paper found it has no effect on the endurance athletes including runners.

What is for sure is that compression has been shown to be effective in improving circulation, which can help flush lactic acid, inflammatory cells and metabolic waste a little faster. Numerous studies have shown that compression, even for just 15-minutes, can have a positive effect on recovery for Olympic-calibre athletes.

But the compression matters for a different reason for swimmers—it helps to create a slimmer profile in the water. 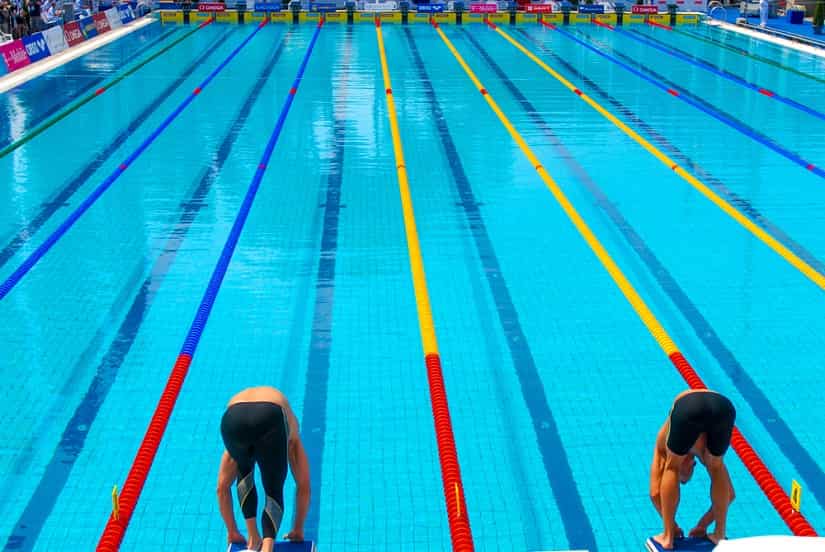 When we spend 15 minutes squeezing into a tech suit we realize just how “compressing” they can be. The suits are designed to be this way, to literally shape your body to be more hydrodynamic, to create less resistance for the water as it flows down your body in the pool.

Perhaps most noticeably, was the final note in the study, where the authors noted:

The possible hydrodynamic effects of wearing a swimsuit seemed to be particularly related to the factors affecting pressure effects rather than the friction.

One of the things you will notice with most tech suits and swim jammers is that they are super smooth to the point of being nearly seamless. This isn’t an accident and is just another step in making a suit that reduces drag in the water.

By removing seams through multiple stitching, heat bonding, welding, and designing the seams to direct the flow of the water the suits become closer to being a second layer of skin.

We are going to break down and review the best tech suits for men and women.

One of the people who helped design the latest generation of Fastskin suits reinforced something that every swimmer should take away from this guide.

That an expensive, space-sciencey suit is no replacement for hard work, consistency, and good technique.

Like all the other extras in the sport, it can give you a slight bump in performance, and shouldn’t be relied on as a substitute for the foundation of training like a beast.

We know these athletes are elite and 99.9 percent of what they accomplish is due to the work and talent that they have – not due to the suit.” – Rick Sharp, Iowa State kinesiology professor and consultant on Fastskin design.

9 Best Tech Suits for Crushing Your Best Times on Race Day. Competitive swimmers are always looking for the best tech suit to swim faster and more efficiently. Here is a detailed look at the top tech suits on the market that will help you demolish your PBs and the competition!

5 Best Tech Suits for Racing Fast on a Budget. You don’t need to spend a fortune to swim your best on race day. Here’s a look at the best budget tech suits for swimming fast in competition.

Ultimate Guide to the Best Training and Lap Swimming Suits for Men. Our breakdown of the best training suits for competitive swimmers.