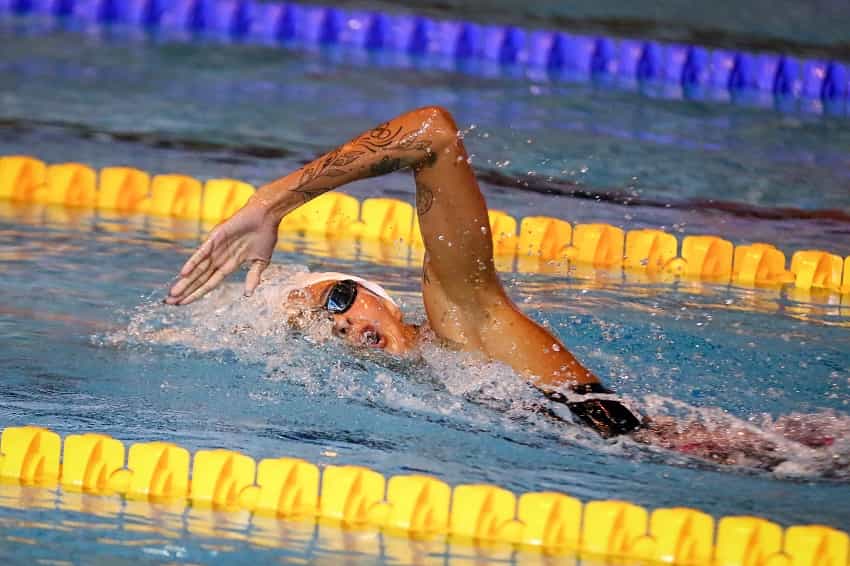 Faster swimming starts and ends with being efficient. Here are five things you can do today at the pool to start swimming faster and more efficiently.

But the secret to swimming fast isn’t pure effort, it’s working with the water and working to overcome our natural inefficiencies in the water.

When you watch the fastest swimmers on the planet churn up and down the length of the pool, is it the swimmer who is moving their arms the fastest that touches first?

It’s not the strongest swimmer that swims to victory.

It’s the most efficient.

Here’s how to swim faster by being more efficient in the water.

How much of an effect does drag have on your swimming speed?

At best, Olympic swimmers use just under 10% of their energy moving forward in the water. The rest is soaked up trying to overcome the resistance of water. And these are the fastest humans on the planet. 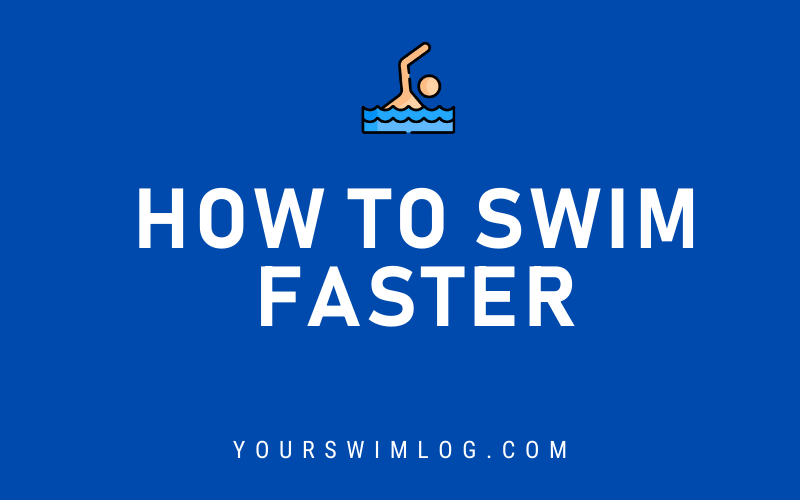 Learn how to swim faster by counting your strokes.

Moving your arms fast doesn’t necessarily make you faster. This is one of those counter-intuitive realities of the sport that many beginner and even experienced swimmers struggle with.

Spinning your arms is a fast way to lose your feel for the water and peak inefficiency. All that effort and reduced speed.

Being mindful of how many strokes you are taking per length is a great starting point for getting an idea of how well you are moving through the water.

One of my favorite “freestyle drills” is something called Mini-Maxi. Swim a length of the pool as fast as you can with as few strokes as possible. This will give you an efficiency score.

Below is a video demonstration. The swimmer takes just 5 strokes to cross the length of the pool (granted, with fins and paddles), and covers the length of the 25-yard pool in around ten seconds. This is exceptional efficiency, and it’s fast.

“Going faster isn’t just moving the arms and legs faster,” says Eddie Reese, head coach at the University of Texas and six-time coach on the US Olympic Swim Team.

Most waterproof fitness trackers and smartwatches for swimmers have SWOLF or stroke-counting. Pay attention to this metric.

Keep your hips up

Swimming is a unique sport in that we are fighting against the resistance of the water.

Unlike team sports, where there is just the competitor on the other side of the ball, swimmers are in a perpetual battle against the density of water, which is nearly 800 times that of air.

Regardless of the stroke, having a high hip position in the water will help you keep a narrower profile in the water. You want your body positioning like a Ferrari in the water, not like a Mack Truck.

This is one of the sneaky realities of developing a high-performance freestyle stroke (or any other stroke, for that matter)…

It’s one of the reasons that swimmers love using a pull buoy in the water—the buoyancy raises the hips, reduces drag, and “cheats” a better body position in the water.

Two ways to improve your hip position in the water:

Swim faster with a high-elbow pull

If you are new to the sport, get ready to hear plenty about having a high-elbow catch.

Why it is so important:

There are lots of ways to get better at getting into a high-elbow catch position earlier. Some of my favs include:

Don’t be afraid to add speed

A lot of beginner swimmers will opt for the long, straight swimming approach to training because they think this is the best way to build endurance in the pool.

While swimming slow for recovery or for technique is great (Super Slow Swimming is actually one of my favorite all-time drills), the reality is if you want to swim fast, well, you gotta swim fast.

“If you swim slow in practice you become a good slow swimmer,” says Reese.

Instead of swimming 1,000-meters straight, consider breaking it up into 10×100, taking :25 rest between reps. Not only will your technique stay together longer, but you will hold a faster overall pace.

Even traditionally high-yardage swim teams, including Gregg Troy at the University of Florida, still incorporate plenty of speed into their distance swim workouts.

Don’t be afraid to break up your swim workouts and sets to place greater emphasis on speed and technique.

Technique never goes out of style

One of the joys (and perhaps, frustrations) of the sport is that there will always be room for improvement. The importance of technique and efficiency doesn’t change, no matter how well conditioned you become.

Be relentless about improving your technique. There will never be a point where you can’t be more efficient.

Alex Popov, the greatest sprint freestyler in history, relentlessly searched for ways to increase the efficiency of his stroke, even while  (he took just 31 strokes to smash the world record in the 50-meter freestyle in a time of :21.64)

Technical improvements are rarely easy, but with some persistence and patience, your stroke will become better for it.

Use drills to target the technical elements of the stroke you want to improve. Swim mindfully.

Swimming with better technique is like removing the parking brake from the human body’s natural inefficiencies in the water.

“Don’t put a limit on stroke technique or how fast you can go,” says Reese.

More Resources on How to Swim Fast

6 Tips for How to Swim Faster Breaststroke. The breaststroke can feel mystifying for beginners and experienced swimmers. Here’s how to swim breaststroke faster with a couple of Olympic breaststroke champions and Olympic coaching legends.