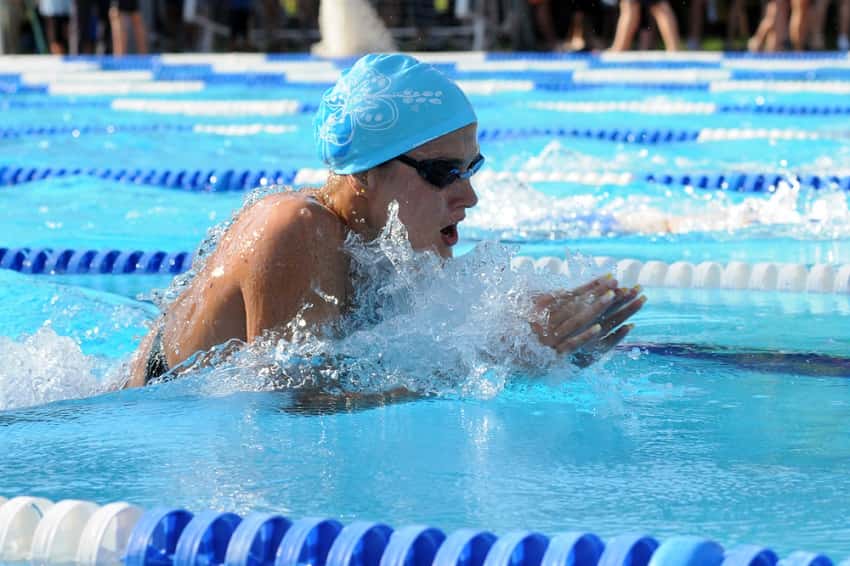 A problem with watching elite athletes sometimes is that we try to emulate exactly what they are doing, even if their style of swimming doesn’t necessarily match what the genetic lottery gave us.

“All too often I encounter athletes who are waiting for their legs to finish a wide breaststroke kick before they start a long/wide/slow breaststroke out sweep,” says Warkentin.

“It’s like everyone wants to have a Kevin Cordes stroke even though their particular genetics are more geared for a fast tempo stroke.”

That’s where today’s serving of drill work comes into play.

About as simple as it gets, the breaststroke-arms-with-flutter-kick drill can be used with swimmers at almost every level.

The drill actively prevents swimmers from stalling between stroke cycles, and as a result promotes a faster stroke rate.

Related: How to Fix and Prevent Breaststroker’s Knee

“When the athlete is kicking flutter kick there isn’t any reason he or she needs to wait to start the next pulling cycle,” adds Warkentin.

For added focus and tempo Warkentin likes to use music to get the swimmers into rhythm when doing the drill.

“Find the beat of a song that the athlete enjoys and make sure the pulling cycle follows the beat of that song.  Obviously the song needs to be uptempo.  If the coach thinks the tempo isn’t fast enough– tell the athlete to get a new song,” says Warkentin.

Below is some video of Mark’s swimmers performing the drill in practice recently.

Typically his athletes will do 35m swim focusing on distance per stroke, and then kick things up a notch for the final 15m, sprinting into the wall at a high tempo:

A big thank you to Mark and the swimmers at the Santa Barbara Swim Club for stopping by and sharing a glimpse into their training.