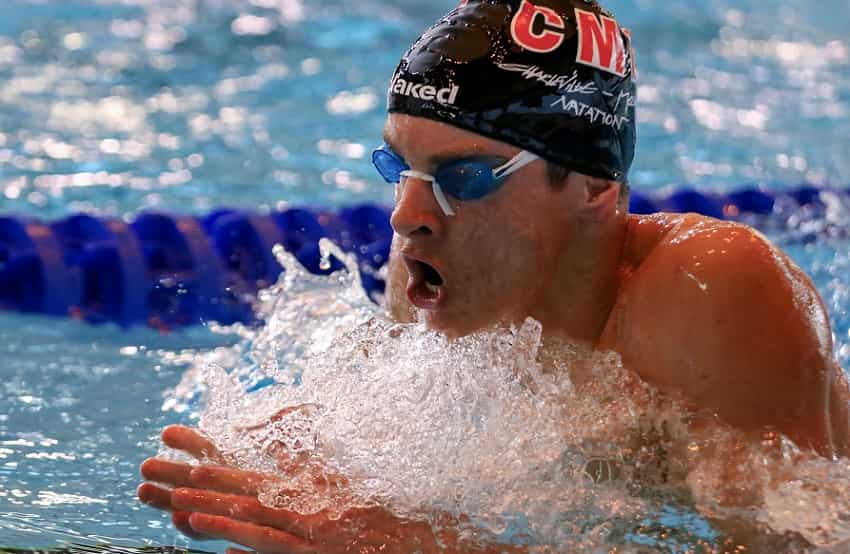 What does one of the winningest basketball players with perpetually slicked-back hair have to do with your big goals in the water?

By now, you’ve likely read my rambling on the importance of incremental improvement a few times, on the blog, in the newsletter, and in the pages of my mental training workbook for swimmers, Conquer the Pool.

Little wins, especially when they are measurable, targeted and relevant, are jet fuel for motivation and improvement.

But because they look so small… so meaningless… so pointless, swimmers skip by them, preferring to focus on the big overnight results.

Because a mindset of sustainable, measurable improvement is the key to success.

Here is how one legendary basketball coach was able to take the simple concept of little wins and develop a system of excellence that produced a rash of NBA titles.

Pat Riley and the Showtime Lakers

At the beginning of the 1986-1987 season, the Los Angeles Lakers coaching staff started tracking the performance of their players. Basically a report card, each performance review included fifteen metrics.

The goal of the review?

The coaching staff, led by Pat Riley and his slicked-back hairdo, who detailed this system in his 1993 leadership book, The Winner Within (Amazon), combined the hard data with “soft” data, including a grade for the effort players put forth in practice and on game day.

At first, these little performance reviews were used to compare Laker players against one another.

But even though this seemed like an easy way to generate healthy competition, the coaches soon realized that comparing Kareem Abdul-Jabber or Magic Johnson, first ballot Hall of Famers, to back-ups and second-stringers didn’t make sense.

“It doesn’t matter how hard I try,” one back-up player noted, “when I’m compared to Kareem or Earvin, I’m going to look like dogmeat.”

The coaches shifted the comparisons in two directions.

Compare performance against comparable players on other teams

First, the metrics were lined up against players on other teams.

The power in this kind of comparison-making was that it gave every player on the team, from the Hall of Famers to the bench-warmers, a clear metric upon which to measure their performance, to motivate themselves towards, and to feel like they were contributing to the overall success of the team.

The comparisons were highly relevant.

Suddenly, everyone on the team, starters or not, had a tangible target to work towards.

They had a competitor—not much better or much worse than them—to provide a healthy sense of competitive fire.

“Everybody had a category in which they could—at least potentially—rank number one in the NBA,” Riley noted.

Secondly, the coaches had compiled a detailed history of each player’s career, dating all the way back to high school. But it was the most recent and corresponding performance data that the coaches used to help push the players closer to peak excellence.

Swimmers should be able to recognize the value in this: How you measure performance should be more than just what is on the clock. How fast you swim depends on where you are at in the season, what kind of training you have done to that point, and even how well you are taking care of yourself between practices.

From day to day, week to week, month to month, even year to year, your preparation is in a general state of flux, determined by a variety of things, making realistic comparisons tricky.

But being able to measure where you are right now versus where you were exactly a year ago gives you some useful and relevant benchmarks. 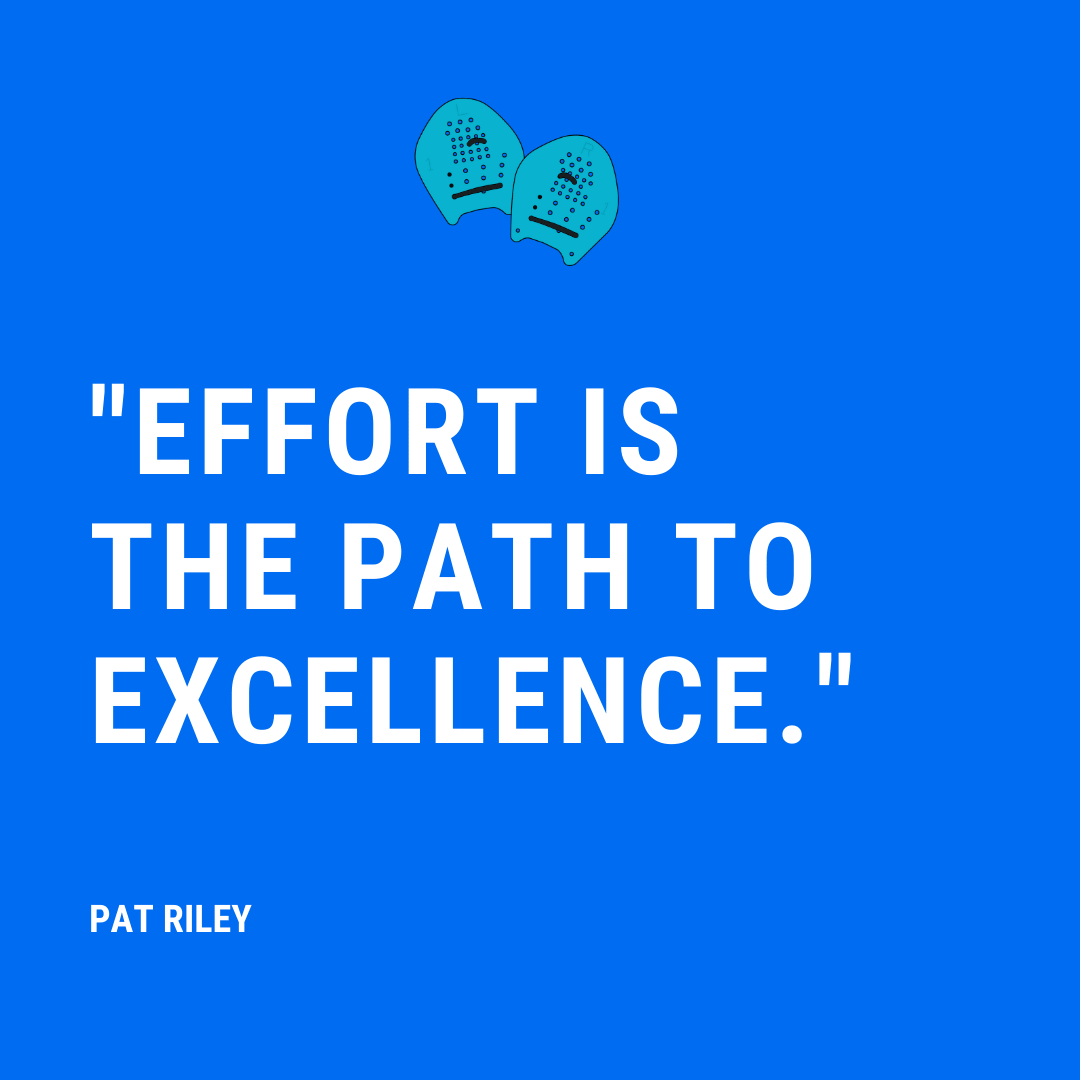 The Power of Incremental Improvement

Now that Riley and his coaching staff were able to give their players measurable and relevant competition, both across the league and in the mirror, they set out to push their players to be just a little bit better.

Of the fifteen areas that Riley ranked his players, five “trigger points” were focused on as being the most high-impact, the ones most likely to compound into a significant jump by the end of the season.

“We challenged each player to put forth enough effort to gain just one percentage point in each of those five areas.”

He told his players: “Don’t try to go ten percent above it. And don’t let yourself go 10 percent below it. Just concentrate on a moderate, sustainable improvement… As we [the coaches] saw it, a one percent improvement in five areas for twelve players gave us a 60 percent increment!”

And how did this approach fare for the Lakers?

“Tremendous is the only word I can use to sum up the impact it delivered.”

This kind of system, that provided players quick feedback and clear and actionable targets, “made stretching beyond present levels of success both a habit and a system.”

Magic Johnson and A.C. Green had the best seasons of their career, with Johnson winning league MVP. Key players, including Byron Scott, Michael Cooper, and Kurt Rambis all out-played their personal bests from the season before.

As a team, the Lakers dominated the league on their way to 65 wins (out of 82 games).

In the NBA Finals, the Lakers would square off against their vaunted rivals, Larry Bird’s Boston Celtics, and come away with an NBA title, eliminating the Celtics in six games.

How to build a system for perpetual excellence in the water

The beauty part of this system is that it doesn’t take much to put into place. You don’t need to sign up to some subscription, hire a sports psychologist, and the system works no matter where you are at with your journey in the pool.

Here are some ideas for building your own little fancy-pants system for 98% percent* guaranteed excellence in the water:

Tips for making this work:

Start writing out your workouts.

It’s your swimming—don’t keep expecting your coach to have all the important details of your training.

Some basic metrics to stay on top of should include: how much sleep you are getting, intensity of volume, yards/meters at pace, and as I will point out in a hot second, effort.

There are things that don’t show up on the clock, on the barbell, or on the scoreboard, that can’t be measured.

You might not hit a PB each day, and you might not go a little faster than you did yesterday, but you can always match or exceed your personal best in effort.

Quickly grade your effort each day after practice and competition. As Riley says, “Effort is the path to excellence.”

Effort matters because there are days where your speed isn’t there, but as long as the effort is, you can feel good about what you are doing in the water.

Compare the things you control.

Compare the things that you control—effort, sticking to your race plan, practices made, attitude, race day routines, and so on.

Spending energy and concentration on things like talent, genetics, the times other swimmers put up—these things sap your focus and motivation.

Stick to grading and comparing the things you control.

Even though Riley frequently compared his players against players on other teams, focusing on this has limited benefit.

Better to concentrate on the things you can actually control. (Hint: Effort.)

Be relevant with your metrics.

You likely already do this anyway, but remember that even what part of the season you line up your metrics against matters.

When you are fully rested for a workout versus being under tremendous fatigue at the end of a brutal training week makes a difference.

Find comparable loads of fatigue and preparation and compare those.

Measure the things that matter most.

With all the times, stroke rates, and data available to us now—especially with the latest generation of wearable swim tech—it doesn’t take much to get lost in a hayfield of data.

Seek out the things that matter most to your swimming, no more than 3-5, and spend the majority of your time focusing on them. Attendance. Effort. Hours of sleep per night.

You don’t need to measure and grade everything, just the most important stuff. Everything else will fall into place.

Aim for those little wins.

Success doesn’t come with massive spurts and explosions, even though when we see someone drop ten seconds off their PB in competition, it feeds that illusion.

That PB was chipped away, one percent at a time, in practice consistently and over time.

Aim to be 1% better each day, and not just in terms of speed, but effort and focus.

Start writing out your workouts, grade the things that matter the most, focus on the things you control, and compare yourself to the most relevant version of yourself.

The 1% better mindsetwill keep you motivated, focused and engaged over the course of training and even competition.

But for every other part of your mental preparation, whether it’s managing your pre-race nerves, setting better goals, or getting comfortable being uncomfortable during training, there is Conquer the Pool: The Swimmer’s Ultimate Guide for a High-Performance Mindset. 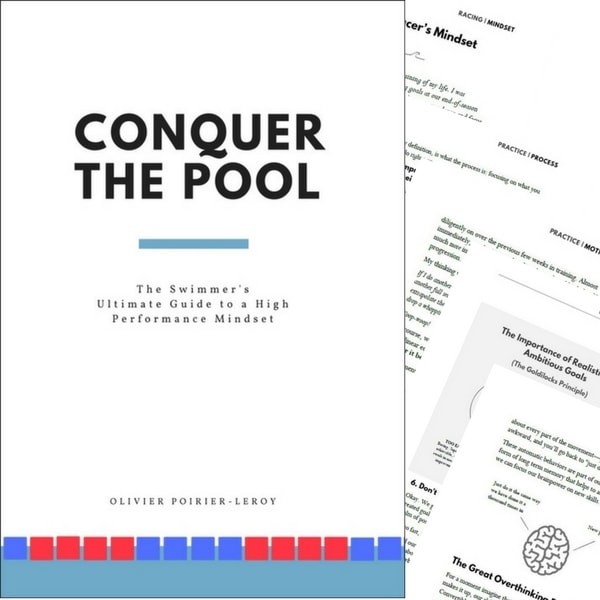 The book was written specifically for the competitive swimmer who wants to unleash a killer mindset in the pool.

More importantly, the book–full of proven concepts and strategies and put together with the input of 200+ head coaches, Olympians, NCAA champions, and former world record holders–makes the how of developing a great mindset clear and simple.

For group and team orders of Conquer the Pool, we offer a team discount and can place your club’s logo on the cover of the book at no additional cost.