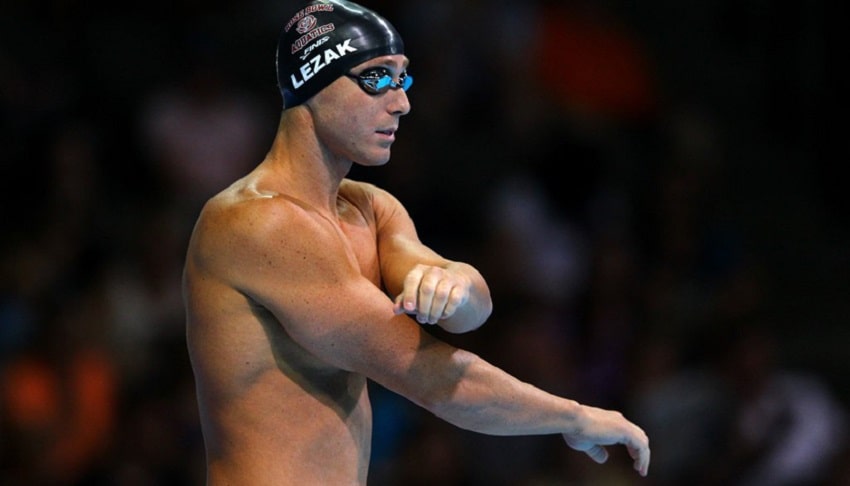 No matter how many times I watch the race video I still get all the goose-tinglies.

When Jason Lezak dove into the water on August 11, 2008, for the final leg of the men’s 4x100m freestyle relay at the Beijing Olympics, it was inconceivable that he and the Americans could win. Personal best times and common sense dictated that it simply wasn’t possible.

As Lezak surfaced from his breakout he was nearly a body length behind the team from France, who came into the race as a lock for gold. France had their ace, Alain Bernard, the world record holder in the 100m freestyle, as their anchor, his massive arms hurling him across the surface, a rooster tail of water behind him.

But then somehow, someway, the impossible happened.

Let’s quickly set the table of that fateful race:

The French team, being anchored by Bernard, had qualified fastest. They were the undisputed favorites to win. And not just win but dominate. On paper, when best times were compared, it wasn’t even close. Bernard did a good job of verbalizing what was generally expected to happen: “The Americans? We’re going to smash them. That’s what we came here for.”

For nine consecutive Olympiads the 4x100m freestyle relay had been owned by the American. But over the past 8 years their dominance had wilted away.

At the Sydney Games in 2000 they lost to the hometown Australians.

At the Athens Olympics in 2004 the Americans placed third behind South Africa and the Netherlands.

After going undefeated in the event for 36 years suddenly American invincibility in the relays had been shattered.

And of course, there was Michael Phelps, who would swim the lead-off leg for the US. Phelps was the headliner of the Games. His quest to break Mark Spitz’s record of seven gold medals at a single Olympics was on the line. No relay gold, no hope to beat Spitz’s record haul. Simple as that.

The Americans were in lane five, the French in lane four, and in lane seven, South Africa. They had the same four swimmers who’d stunned the world to win gold and break the world record four years earlier in Athens. Over in lane three was Australia, who had a stacked line-up of sprinters. In all, a dozen world record holders filled the final.

It goes without saying that the atmosphere was thick in the Water Cube.

And as the first wave of swimmers dove in, things unfolded as expected.

Phelps had a dazzling opening leg, breaking the American record in the 100m free. Eamon Sullivan of Australia would dip under the world record on his opening leg, giving the Australians an early lead.

On the third leg, France’s Fred Bousquet, who had recorded the fastest split in history during prelims with a 46.6, took the French out to a comfortable lead. The United States were half a body length behind as Bousquet charged for the wall.

Standing on the blocks, Bernard and Lezak, who at the age of 32 was the oldest male swimmer on the American team in Beijing. As the anchors dove in, a resigned Rowdy Gaines had this to say about the Americans chances of winning: “I just don’t think they can do it.”

Bernard’s lead increased over the first 50m. The gold medal was sewn up, and the world record line wasn’t even in the same zip code anymore. The Americans had put forth a valiant effort, but the power of the French was too much to overcome.

But then the magic started to happen.

Lezak hammered the turn, and when he popped out of his breakout he was suddenly on Bernard’s hip, eyes locked on the Frenchman. As they passed 75m, Bernard, who had looked unstoppable, was beginning to tighten up. The piano was beginning to fall on his shoulders.

Stroke by stroke, Lezak reeled in Bernard. At the 85m mark, where Lezak had been expecting to fade, he felt a final surge of adrenaline blast through his arms and legs. “I’d never felt it before,” he said.

By the time they reached the flags, with just five metres to go, they were in lock-step, with both swimmers hurling their arms at the wall with one final gasp of effort…

By just eight one hundredths of a second.

Easily the fastest split in history.

To the feet Lezak’s first 50 was done in 21.50—which would have placed him fourth in the final of the 50m freestyle later that week.

How did Lezak do it?

By his own admission he wasn’t full of confidence prior or even during the race.

“I had plenty of negative thoughts during the race,” Lezak said later. “I really didn’t think I’d be able to catch him.”

So how did Lezak pull off the impossible?

The Power of Competition

We’ve all experienced that surge of adrenaline that comes from competing at our absolute best: The surreal sensation of when our preparation aligns perfectly with the pressure of the moment.

The time that Lezak dropped that day in Beijing was simply absurd.

Did the drafting factor into it? Sure. Did the excitement of the moment play a role? You know it. Did playing the role of underdog help him throw down a “pressure-free” effort? You betcha.

Instead, Lezak competed his brains off from beginning to end, not saving anything for the finish, swimming a time that wasn’t even the same neighborhood as his personal best time.

The word “competitive” is often viewed negatively. The thought of competing at our best is sometimes avoided because we don’t want to appear greedy or narcissistic.

The negative stereotypes around competition make sense–we’ve all seen what kind of ugliness unhealthy competition brings out of people:

Fortunately, bad behavior like this naturally leads to isolation.

Nobody wants to play with the kid who throws a fit and takes their ball home every time they lose. And no one wants to hang out with the swimmer who is constantly competing with things that don’t matter, whether it’s who finishes their meal first or a board game between sessions at a swim meet.

These kinds of actions might get some short-term results and attention, but it’s not a viable long-term strategy for success.

Competition in itself isn’t bad.

It’s how we use it and frame that makes all the difference. (Just like other “negative” emotions or states including anxiety, perfectionism and anger.)

Healthy competition includes a respect for the rules of the sport, respect for your opponents, and a relentless desire to perform at your best.

Healthy competitors have a fierce competitive fire while in the pool, but they don’t get bent out of shape if they don’t beat you at a video game.

While they want to win, healthy competitors chase personal excellence above rank, generally understanding that maximizing their own performance will be its own reward.

Unhealthy competition is the swimmer who refuses to understand that losing and failure is part of the sport.

It’s the swimmer who has to win at everything, all of the time. They sprint the warm-up to “win” even though no one else is competing with them. Long after the meet is over they are still comparing how they did to other swimmers.

Their desire to improve starts with seeing others fail compared to looking at how they can maximize their own performance.

At the end of the day competition is a tool. It’s a vessel for you to get the best of yourself. Use it to elevate your effort, your focus and push your limits.

Being more competitive starts in practice

Swimmers will go through the motions, playing it safe, being cautious with their energy and commitment. Which is odd given their expectations for race day. Although they want a high-octane performance on race day, this expectation flies in the face with how they train.

Swimmers talk often about the mental pressures of competition. They bemoan being too nervous or choking. They get frustrated at the invisible mental blocks that suddenly pop up the moment they lace up a racing suit compared to the comparative mental ease of training.

And while competition is stressful and nerve-wracking—one eye-opening study of ballroom dancers found that the physical stress response they experienced before competition was the same as someone jumping out of a plane for the first time—the stress of competition is made much worse by being made a rare experience.

The mental and emotional experience is tough, and if it’s something you never encounter or actively avoid in training or during your preparation the nerves are going to blindside you while you prepare to get up on the block.

Acclimatizing yourself to the stress of competition starts in practice.

Crank up the intensity and compete levels in training.

I’m not just talking about pairing up with a teammate and having a figurative cage-match for two hours at practice over the lane rope. Having daily Battle Royales with your teammates during the main set is fun and brings out everyone’s best (your teammates deserve your best, as well), but it’s the inner competition that is going to give you the biggest gains.

At the end of the day no matter what the swimmer in the next lane is doing it’s still going to be you versus you in the pool.

Gamifying and competing during practice are not only going to help you immediately boost the effectiveness of your workouts, and make you faster on race day, but it’s also way more enjoyable than the alternative: Playing it cautious, swimming through the laps with low focus and little purpose.

Competition is a normal part of life and of our sport. Heck, it’s even in the name: “Competitive swimming.”

When you walk onto the pool deck today choose to compete.

Compete on the main set. Compete on exceeding what you did yesterday. Relentlessly challenge and compete with yourself on the things that are important to you and your swimming.