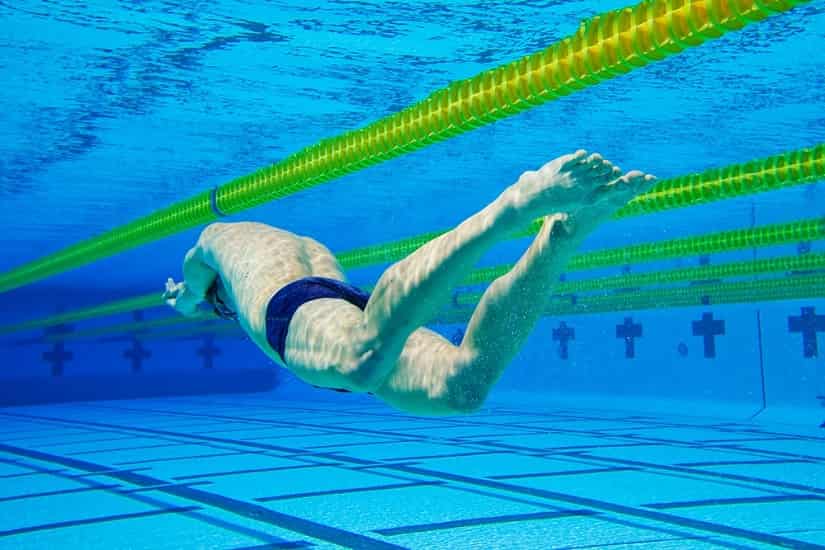 The grace and power of a powerful underwater dolphin kick is a sight to see.

But how far should you actually kick underwater off your walls?

At what point does it actually end up slowing you down?

The underwater dolphin kick has become a staple of every fast swimmer’s diet.

No one has popularized the drastic need to work on your underwater dolphin kick perhaps more than Michael Phelps.

At the Rio Olympics Michael Phelps showed yet another reason for why he was one of the top male swimmers on the planet for so long.

In the final of the 4x100m freestyle relay Phelps went into the turn almost neck and neck with France’s Fabien Gilot (Gilot actually hit the wall 0.13 seconds ahead).

Staying underwater for a little longer, Phelps hammered 9 vicious dolphin kicks that sent him hurtling past the Frenchman. When Phelps exploded to the surface the United States suddenly had a sizable lead that they would not relinquish on their way to the gold medal.

It was a feat made all the more extraordinary considering the competition Phelps was against—Gilot is absolutely no slouch in the sprint freestyle.

And while we might have gotten used to seeing Phelps demoralize and thrash the competition off the walls, that doesn’t mean that we should be trying to completely emulate his way of doing things.

In fact, more often than not, doing too many dolphin kicks saps our respiratory muscles, puts us into oxygen debt, and leads to slower swimming performances.

We know that underwater dolphin kicking is generally faster than on-the-surface swimming.

I say generally because:

If you aren’t truly conditioned for it, extended bouts of holding your breath during a race will have you gasping and snorting for air through your first few strokes, slamming the brakes on the speed and benefit of exploding out of a breakout with speed.

Research published in the European Journal of Sport Science covered the underwaters and results of the 100m and 200m swimmers at the 2013 FINA World Championships in Barcelona.

As you can see, the results were event specific, and generally amount of time spent underwater wasn’t as important as the velocity that was carried through the starts and breakouts.

Set a Baseline for Your Underwater Dolphin Kicking

When it comes down to figuring out how long you should stay underwater it’s going to require some testing. A pretty simple rule of thumb is that if you are surfacing completely gassed for air you’re staying underwater too long.

The next time you are at practice have your coach time you kicking underwater as fast as you can to 7.5m, 10m, 12m, and 15m. You’ll get a good idea of where your speed starts to fall off.

(Remember: from the time you push off you are slowing down. You want to maximize that speed from your start/walls, and carry it through to your swimming.)

Don’t feel like you have to do a ton of underwater dolphin kicks just because the greatest swimmer in the history of the sport has mastered it.

George Bovell, a 5-time Olympian from Trinidad and Tobago was aware enough to know that during his 50m freestyle races he was faster on the surface of the water. Bovell, who swims a 21.00 short course 50 free, would explode to the surface almost immediately off the start, foregoing the dolphin kicks altogether.

Gilot, when paired up against Phelps, surely knew that trying to get head to head underwater with a lifelong dolphin kicker like Phelps was pointless, and that he was better off getting to the surface quickly.

The underwater dolphin kick will continue to be a critical part of swimming. Just because your fly kick isn’t that hot today doesn’t mean you should stop working on it, there are a variety of reasons to continue working at it beyond wielding it in competition.

It comes down to balancing out your strengths versus weaknesses, and being humble enough to know how you swim fastest, even if it’s not exactly like your idols.