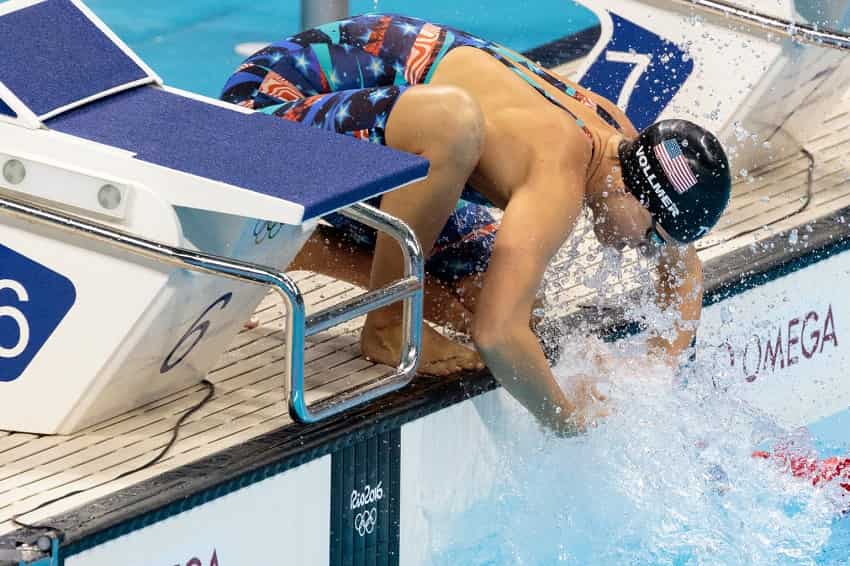 That’s the last thing Dana Vollmer glimpses before she dives into the clear water during the preliminaries of the 100m butterfly in Rio.

The road to Rio has been bumpy—literally. A year and a half earlier Vollmer was eight months pregnant and ordered to bed rest. The inactivity drives her crazy. As many swammers can attest, when the pool and the sport is taken away or kept from us the more deeply it calls to us.

Then and there, Vollmer vows to get back into the water and see how far she can come back.

It’s the word that Vollmer has chosen to write on her right foot—the foot whose toes are curled around the front of the starting block that day in Rio. The word is the last thing to go through her mind before the starter’s gun goes off and she launches into the void.

Don’t Call it a Comeback

When Dana Vollmer stepped away from the sport in 2013, no one would have faulted her for retiring.

At the London Olympics the year before Vollmer set the world record in the 100m butterfly on her way to winning gold. She’d add a couple relay gold medals to cap a successful Olympics. It seemed like the perfect swan song to a successful and long career in the pool.

Vollmer qualified for her first Olympic Trials at age 12. Won a gold medal in Athens as part of the world record setting 4×200 free relay squad. She later missed the Beijing team, and then rebounded for the 3-medal performance in London.

After the 2013 FINA World Championships Vollmer quietly walks away from the sport. While there is no retirement ceremony, she takes a step back. The constant fatigue, the training cycles and endless laps have taken their toll, and she is ready to get her life outside of the pool started.

In 2015, her and her husband, former Stanford swimmer Andy Grant, have their first son, Arlen Jackson Grant. Eight months into her pregnancy she is ordered to bed rest. The life long athlete is forced to do the one thing she struggles with most—not being active.

A few weeks after giving birth to her son, Arlen Jackson Grant, Vollmer is back in the water in the familiar waters of the Cal Berkeley pool. The break from the pool refreshes her outlook on the sport. 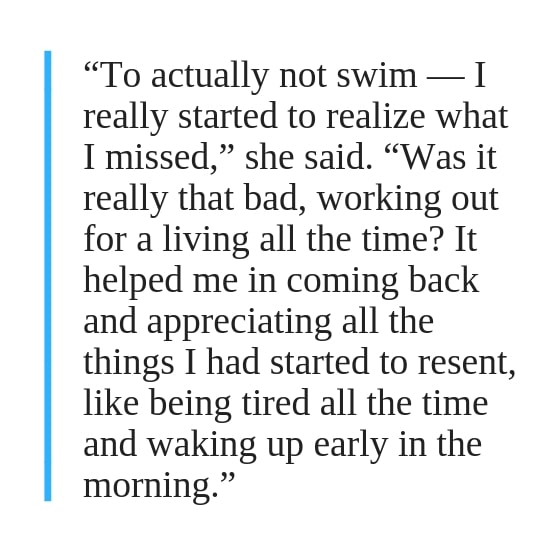 A few months later she is back on the national stage, making the finals at US Nationals in the 100 butterfly. At Olympic Trials she places second, good enough to qualify for the team going to Rio.

While Vollmer writes the word forward on her foot during the prelims of the 100m butterfly, for finals she writes the first name of her newborn son, Arlen.

Looking down and seeing his name would give her the perspective she needed to stay poised in the pressure-cooker of an Olympic final.

“He doesn’t care if I have a bad race,” said Vollmer.

With the name of her son on her foot, Vollmer takes the bronze medal in the 100m butterfly in Rio.

Staying calm in the middle of the storm

The stress of competition is real. The lights, the expectations, friends, teammates and family—they combine to create pressure.

Although there are things we can do to better deal with the mental aspects of anxiety and pre-race nerves, the physical symptoms of pressure and competition are universal. We all experience the same blast of stress before a competition.

One study [2] of ballroom dancers found that the stress response before competing was similar to someone jumping out of a plane for the first time.

The stress response was also nearly uniform across the experience levels of the ballroom dancers. The physical response to competition was the same whether they had competed twenty times in the past year or not at all.

Knowing that being nervous is normal is one thing, but what can we do manage and funnel those nerves to maximize our performance in the pool?

You can start with anchors.

Anchors give you something to stay grounded

When the pressure is on it’s easy to get carried away by what’s happening around you.

We get focused on what other swimmers are doing, what people on social media are saying, or the expectations and baggage of our own past performances. Being swept up in the external stuff happens. There are countless tales of swimmers who have choked or collapsed because of external expectations and the environment.

Anchors—writing an action word, focus word or mantra on your foot, for example—is one way to keep the focus internal and positive.

It gives you something concrete and controllable that you can hold onto when things are getting a little crazy around you.

Think of anchors as a performance cue. We take a vague cue or statement and use it to stay planted when the world around us is swirling and packed with pressure.

Vollmer used her anchors to stay focused and grounded: Forward. Arlen. And for her final race in Rio, calm.

These simple cues linked her to a mindset or place that gave her the confidence and poise so that she could let go of what was going on around her and swim her best.

How to create your own anchors in the pool

Here are some suggestions for when it comes to building anchors for your own performance:

Anchors should be relevant to you. Struggle with taking your races out too quickly and dying? Think of the words easy speed as you dive into the water. Get too nervous and tensed up behind the blocks? Write breathe on the back of your hand.

Use them to help you get into the mood to perform. What is your ideal emotional state when you perform? Think back to the times where you have utterly destroyed your personal best times and reflect on what kind of mindset you had that day. Upbeat? Focused? Aggressive? Confident? Work backwards from these states and build anchors that will promote them.

Keep them positive. Anchors work best when you are building a performance and not when you are trying to save one. “Don’t choke” isn’t an anchor, it’s simply going to push you into the direction of choking because that’s all you are going to be thinking about. Instead, focus your anchors and performance cues on the mindset you want for yourself.

On the final day of competition in Rio Dana Vollmer is standing on the block. The 4x100m medley relay is underway, and in the water is her teammate, Lilly King, roaring for home.

The word on Vollmer’s foot is calm.

“I felt strong,” Vollmer said. “…I kept taking out my 100 flies really fast. I was like, ‘Calm down. You’re OK and just really bring it home and have a good finish for the next person.’”

Vollmer hits the water and gets the Americans out to a body-length lead, dropping the fastest split in the field with a 56.00. On the strength of her leg the US handily win. It’s Vollmer’s fourth Olympic gold medal, and seventh overall.

“I kept thinking back to London, and that was by far one of my favorite moments, and to get to stand up there with three different girls and the energy they bring to the team, that kind of added to me writing calm as well. I was like go out there and swim how we know how to swim.” [3]

Olympic Champion Tom Dolan: Adversity is Confidence in Disguise. Some swimmers buckle under adversity and setbacks–others use it to steel themselves for the best performances in the history of the sport.