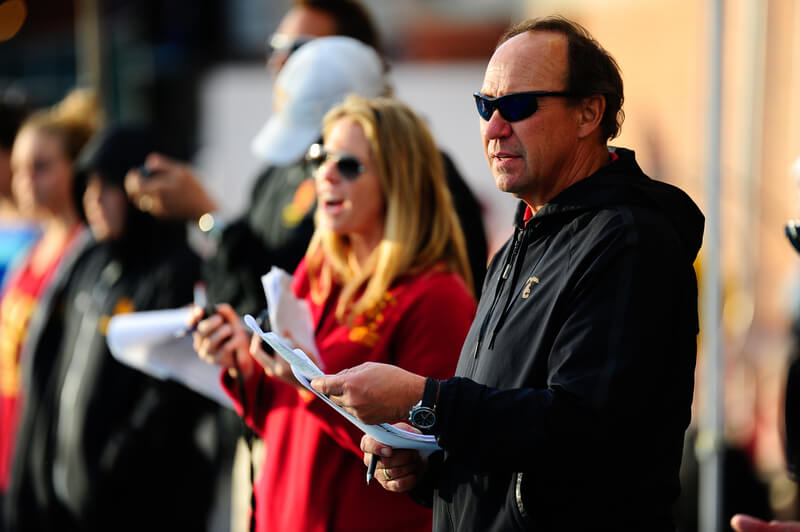 Helicopter parent: Although well-meaning, this is a parent who is hyper-present and over-involved with their child’s performance, named as such for being known to “hover.”

For these parents, the advice and desire to stamp their thoughts and beliefs onto the training program comes from a good place. The parent wants what is best for their child athlete. Which is completely understandable.

Dave Salo, head coach of the powerhouse University of Southern California Trojans, offered advice for coaches who are facing a predicament of butting heads with a parent who believes that they have all of the answers for their child’s swimming success.

Salo, who coached Irvine Novaquatics before USC – a position he held since 1990, while also retaining a general manager position with the club – has coached a long line of Olympians and Olympic medalists.

At the 2000 Olympic Games he sent Amanda Beard, Jason Lezak, Aaron Peirsol, Gabrielle Rose and Staciana Stitts to Sydney, where they collected a total of 5 medals.

Most recently, at the 2012 Olympics in London he sent another five Americans, including Jessica Hardy, Ricky Berens and Rebecca Soni, while also helping sprint star Katinka Hosszu and distance standout Ous Mellouli on their path to representing their birth countries of Tunisia.

Outside of his impressive Olympic pedigree, Salo is also a Ph. D recipient in exercise physiology (something that will come up soon enough), and is the author of SprintSalo, a must-read for anyone serious about learning more about training fast to race fast.

In an interview he gave with American Swimming, the magazine of ASCA (American Swim Coaches Association), Salo opened up a bit to talk about how he plans his workouts, or rather, doesn’t.

His workouts, although there is a general sense of what needs to be accomplished, are rarely written down, and conceived on the fly:

The way I operate, just so you understand, as I said this earlier is that I don’t write my workouts down. I have a sense of what I want to do.

I kind of gauge my team and where we need to go and what it looks like. I come in with an idea of certain things that I want to accomplish in a workout and it just comes off my head. The coaches will come in and ask, what are we going to do?

I say, I don’t know, just tighten up the seat belt and let’s go.

For parents who may have used to have been swimmers, and swam back in the “good old days” where the norm was pounding out yardage until your arms fell off, it can be easy to see that Salo’s approach might be disconcerting.

Salo admits that after leaving Irvine for USC he figured that the so-called “helicopter parents” would decrease, especially going from a team that regularly has 400+ swimmers to a university program with more mature student-athletes that number in the dozens.

While still in the club environment, Salo would set the tone of the meetings with these parents quickly:

Imagine this. You are sitting down with a parent who is complaining about what you are doing. They say well, “Coach Salo, I just do not agree with you.” You say, “Umm, it is Doctor Salo.”

I did that once and the parent just melted. You want to be a successful club coach get, a Ph.D or an MD or just JD…It really can set the tone for parent meetings.

When that fails, and the parent is continuing to impede in the coaching and trying to drive the program and instruction for the swimmer, the only recourse left, is to cut the cord:

Beware. When a parent comes in with a Power Point presentation, it is time to move that parents away. So how do you deal with helicopter parents?

You just tell them the honest truth. It’s okay to say, “Look, our program is not for you.” What I have been telling my coaches at Irvine is I want them to interview families that want to join the team.

If you feel they shouldn’t be on our team with our values, you need to tell them to move on.