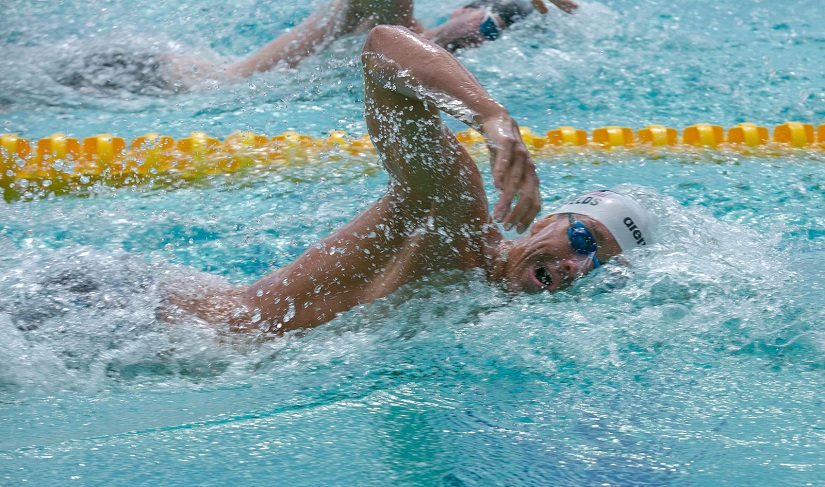 The pull-up has long been a part of the swimmer’s dryland.

Swimmers, with their strong lats and shoulders are basically made to dominate the pull up bar. Olympians like Michael Phelps, Natalie Coughlin, Katinka Hosszu and Nathan Adrian have long used your basic pull up to strengthen their swimming.

But how much of a predictor is the pull up for swimming speed?

In other words, does being good at pull ups help you to swim faster?

A study published recently in the Journal of Strength and Conditioning Research sought out to see how much of an impact a swimmer’s pull up abilities both in mechanics (i.e. are they doing the pull ups properly?) and overall volume (how many pull ups can they do in a row) on swim speed.

The researchers took a group of 12 male swimmers, averaging out at 19 years of age, with an average 50m freestyle time of 26.41.

The fellas did a number of tests:

There were some surprising and not-so-surprising results:

The faster swimmers in the water had better form on the pull-up bar, but they weren’t necessarily the ones who did the most reps.

Technique and form–just like on dry land as in the water–outperforms blind reps.

The swimmers who could do the most squat jumps in a row, or jump the highest, weren’t necessarily the fastest swimmers.

Some good news for those of us who aren’t natural-born high jumpers.

There was a significant relationship between kicking speed and swimming speed.

This can’t come as too much of a shock—fast swimmers have fast kicks. (Russian sprint legend could kick 50m in 27 seconds…long course.)

Which goes to show that if you want to be a faster swimmer, start by being a faster kicker.

Weight Training for Swimmers: A Letter from Your Strength Coach. Lifting weights has long been thought to be a way to boost performance in the pool. Today a group of top strength and conditioning coaches from elite NCAA programs discuss what swimmers need to know about weight training.

Why Swimmers Should Be Doing Dumbbell Bench Press. Ready to unleash your inner Arnold while also adding power to your swimming? Here’s why you should be incorporating dumbbell bench press into your strength training regimen.