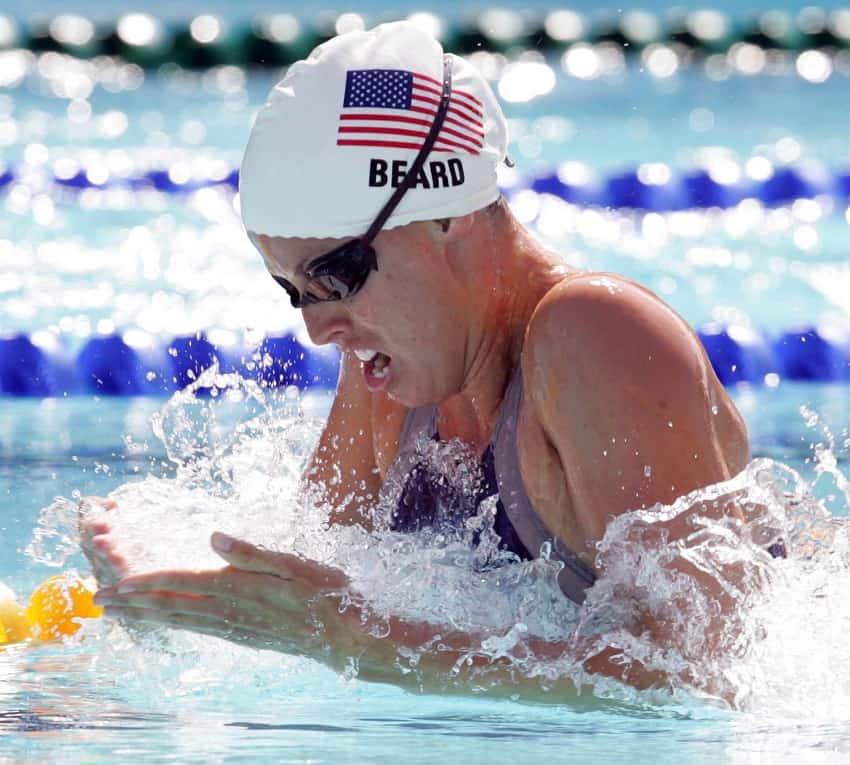 She made her first Olympic team at the 1996 Olympics as a 14-year old, winning two silvers in the breaststroke events and a gold in the medley relay. In 2004, Beard would break the world record in the 200-meter breaststroke at Trials before winning gold at the Athens Olympics.

Her 2013 auto-biography, In the Water They Can’t See You Cry (Print | Kindle | Audiobook) is the searing backstory of what happens when a world of fame, success, and the bottomless and flighty expectations of strangers arrive at your doorstep.

On the surface, Beard’s story looked like the dream. She was a California girl with a big smile and a relentless work ethic. But her time at the apex of the sport was far from easy.

After winning three medals at the Atlanta Olympics in 1996 at the age of 14, she struggled to cope with the fame, expectations, and fair-weather attention that came with Olympic glory.

Depression, body image issues, self-harming, eating disorders, the cruelty of sportswriters—it was a lot for a shy teenager to handle. Her book is this journey, a primer for young girls (and boys) who are struggling to find their way and place in sport and in life. A companion for those trying to navigate the uncertainties and pressures of young adulthood.

Beard’s story is complex. The highs–Olympic glory, world records, celebrity, are just as intense and as visceral as the lows–self-harming, depression, lousy relationships.

We tend to lionize and mythologize our sports heroes, unwilling to accept that they have flaws, doubts, and issues like everyone else. But Beard shows us the real, sometimes ugly life behind the fantasy.

Below is just a sample the key passages, quotes, and my own thoughts on Amanda Beard’s In the Water They Can’t See You Cry. 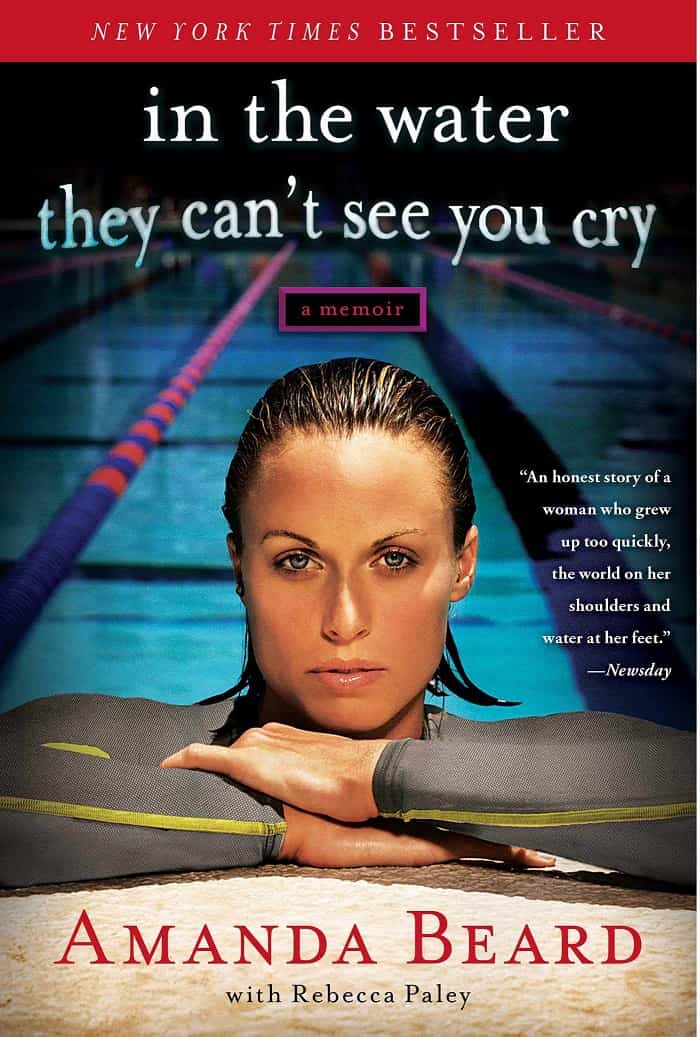 Even Olympic champions start at the back of the lane

Like many swimmers, Beard got the chlorine bug in summer swimming. When Beard joined NOVA, one of the top aquatics programs in Southern California, she found herself the small fish in a big pond.

On day one, she was easily the slowest swimmer in the group. Barely able to make the intervals, she took it as a challenge to try and keep up with the other swimmers in the pool.

The pool was a reprieve

When Beard’s parents divorced, she found refuge in the water, taking comfort in the things she could control, and finding an outlet through the sport.

She took the pain and uncertainty and channeled it in the pool towards her workouts.

The power of distraction

Like all swimmers, Beard found creative ways to distract herself and count reps, strokes and sets in the pool.

Swimming is largely a solo endeavor

Even though we train in a group within a team, there is often little room for conversation between sets and rushing out the locker room to get home for the nightly dinner/homework combo platter.

But the individualistic nature of the sport also helps create a sense of accountability, even if that meant it also came with additional pressure.

Improving technique almost always involves a struggle period before you get the hang of it.

Anytime you try to over-ride existing habits and motor patterns in the water there is going to be a period of adjustment.

Where things feel worse. Where you struggle. Stepping backward before you can move forward.

Exponential improvement leaves little room for appreciation of the ascent

In 1994, Beard dropped almost 20 seconds off her personal best time in the 100m breaststroke. She went from age grouper to national contender in less than nine months.

Her improvement was so fast that it was hard to gauge the significance of it. She didn’t have time to think about what it all meant.

In August 1995, she made her first international team. Pan Pacific Championships. Being surrounded by the fastest swimmers in the country on the national team, the seriousness that her teammates exhibited struck her as odd.

Because of her inexperience and ignorance, she was able to stick to what had worked so far.

She won silver in Atlanta, even if the media saw it as losing gold

At the Atlanta Olympics, after taking silver in both individual breaststroke events, she got a taste of the avalanche of expectations that were to come.

“Are you upset that you didn’t win gold?” a reported asked Beard after the 200-meter breaststroke in Atlanta.

Inexperience can be an asset

At the 1996 Olympics in Atlanta, Beard was just 14-years old. She’d ascended very quickly in the sport. The exponential rate of improvement meant that she hadn’t settled into the same expectations and seriousness that her older teammates on the US Olympic team had acquired over time.

Her inexperience, her ignorance, was an asset. Beard would cruise to a silver medal behind Penny Heyns of South Africa in the 100-meter breaststroke. 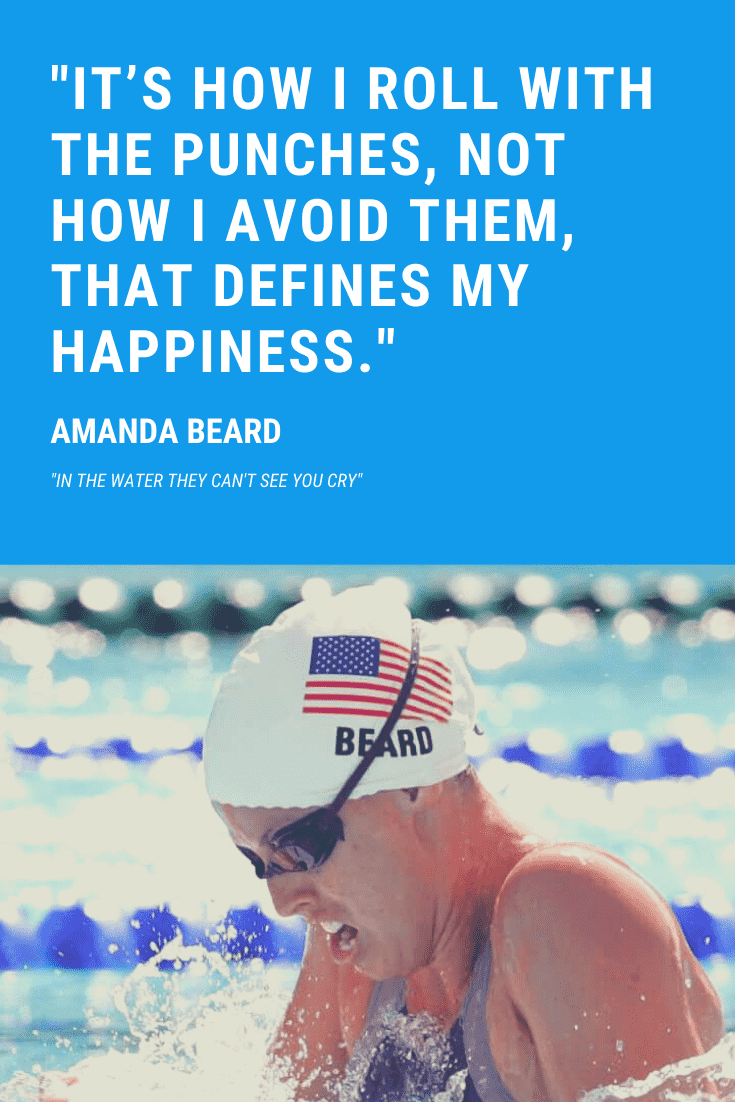 Body image became a focal point when she hit puberty at age 15.

Where she used to be able to go to the pool and use it as a refuge, swimming had now become a source of angst and stress.

Going from hunter to hunted

Six months after the Olympics, Beard swam at a meet in Long Beach. The energy felt different as she walked out onto the pool deck.

With Beard struggling, and no longer in the top few swimmers in the US in her events, she was no longer making international teams. With that, fewer people were approaching her for autographs at events.

The critics can be exceptionally cruel. And can solidify the worst things you think about yourself.

Beard’s father kept newspaper stories and clippings in a scrapbook. Anytime Beard made a team, broke a record, or made the paper, he would clip the story. He also kept the bad ones (but not in the scrapbook). Beard stumbled upon them while looking for a newspaper with movie showtimes. (pre-internet!)

After going out for dinner with some teammates her freshman year at the University of Arizona, she felt guilty after polishing a burger and fries.

By the time she got back to her room, she decided that she needed to purge herself of the food. She went to the bathroom and threw up her food.

The combination of partying, late nights, purging, and training like a world-class athlete were tough to handle. But it was hard to give up anything.

In July of 2003, Amanda Beard let the world know that she was back.

It had been seven years since her silver medal winning performance in Atlanta, and three years since winning a bronze in the 200m breaststroke in Sydney, but at World Championships she ascended to the peak.

She swam a 2:22.99 in the 200m breaststroke, winning gold at Worlds, and tying the world record. She was just as surprised as everyone else by the time.  A staggering drop of two and a half seconds off her personal best time.

The following year, she would break the world record again at Olympic Trials and win her first individual Olympic gold medal in the 200m breaststroke in Athens.

She eventually came to terms with being an imperfect role model

For a long time Beard struggled with maintaining the illusion of the All-American swimmer girl. She faced considerable backlash from her modeling, including a Playboy spread in 2007. Eventually, she started to bring the full depth of her journey to the surface. Getting the struggles out in the open helped her come to terms with herself.