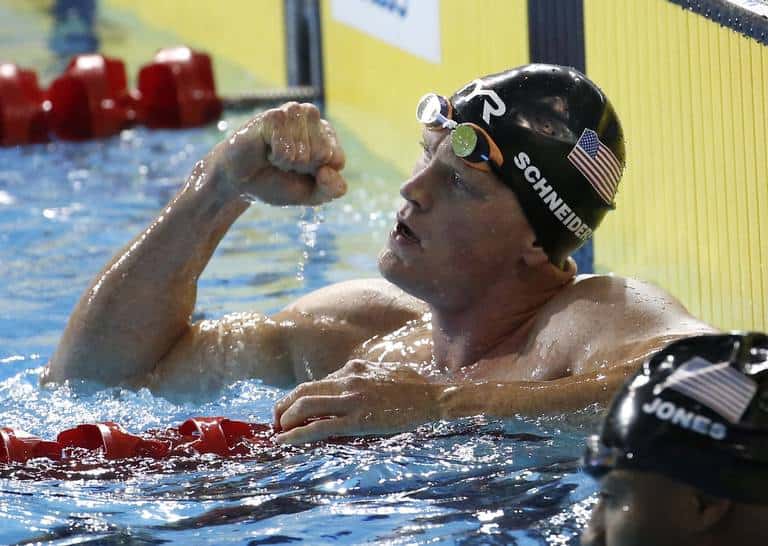 World and NCAA champion Josh Schneider shares one of his favorite sprint sets that will help you build blistering backhalf speed in your 100’s.

Later this year Cincinnati’s Josh Schneider will race for a spot on the team the United States is sending to Rio.

Josh, who started swimming at the age of 14 is one of the quickest men on the planet, winning the 50 yard freestyle at the 2010 NCAA Championships as a senior with the University of Cincinnati. Last summer he won gold in the 50m free at the Pan American Games, and has racked up a few short course world championship relay medals as well.

But for today he dropped by to share one of his favorite swimming sprint workouts.

The swim workout is designed primarily to help improve the back-half of your 100m race, and features between 750-950 of what is essentially flat-out, pedal-to-the-floor swimming with plenty of rest to insure a high level of quality.

“We’ll do this on a Saturday usually,” says Schneider.

The workout was designed and given to him by Mandy Commons-DiSalle, who has been head coach of the Cincinnati Bearcats swimming and diving program since 2014.

Here is the week-ending sprint session Schneider shared with us:

The not-so-secret secret to swimming fast is training the way you want to race so that when it comes to racing all you have to do is swim like you train.

Simulating competition includes the way Schneider warms up for this workout.

“We’ll start with everyone doing their individual meet warm-up routine,” he says.

At which point, they will go to the blocks for the following:

Thank you to Josh for taking the time out of his training to share this set. You can follow Josh on his way to Rio by catching up with him on Twitter.