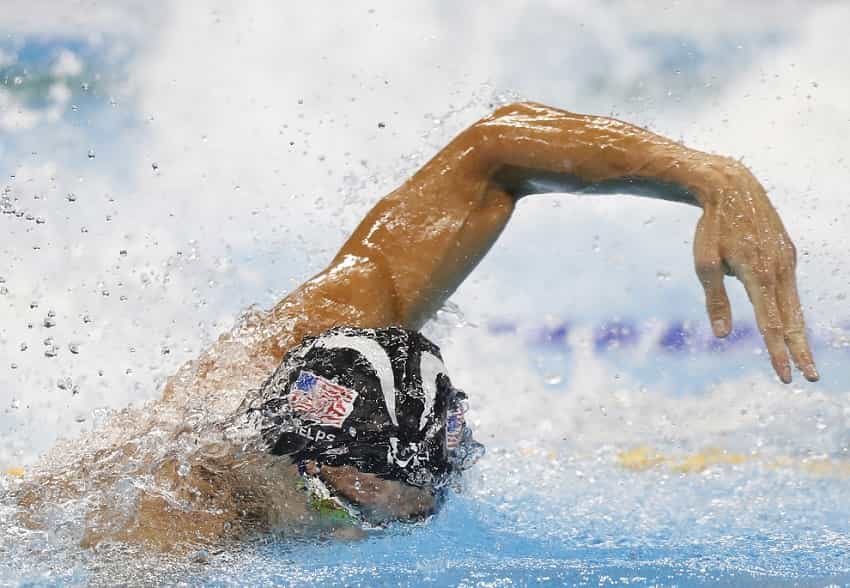 Kobe Bryant was a five-time NBA champion, Olympic gold medalist, fourth-highest scorer ever, and is widely regarded as one of the best basketball players ever.

He was also a bit of a swimming fan, attending US nationals in 2018 with Michael Phelps, presenting at USA Swimming’s Golden Goggles, and cheering Phelps on during the Beijing Olympics.

In his book, Mamba Mentality, Bryant outlines his approach to the sport and craft of basketball. While the book is obviously geared towards basketball fans and players, Mamba Mentality sheds light on the mindset required to be an elite level athlete.

There are plenty of takeaways for swimmers.

Bryant was obsessive in his preparation, refusing to allow anyone to outwork him. He studied the game, both on film and by asking questions of the greats who had come before him. He learned from his failures and missteps, doubling down on weaknesses until they became strengths.

Here are some things swimmers can learn from Kobe Bryant and the Mamba Mentality.

Don’t shy away from improving.

We all have things that we struggle with in the water. Maybe it’s our underwater dolphin kick. A stroke. Or even a small technical element of our best stroke.

With weaknesses, we tend to avoid them because we struggle with them. After all, not mastering something isn’t that fun.

But you shouldn’t fear the weaknesses in your swimming—often they present out-sized opportunities for improvement. Don’t fear the difficulty that comes with working on your weaknesses. Improving something means risking looking silly or stupid.

Working your hardest is a reward unto itself.

The greats have a way of enjoying the privilege of working harder than anyone else. They view their work ethic as a competitive advantage.

Beyond the obvious benefits of performing better because of a superior work ethic, working hard—yes, both smart and hard—is a reward unto itself. The satisfaction of having done the work is impossible to fake.

And more critically, having an epic work ethic is enjoyable. Rarely do the elites see working harder than the next athlete as sacrifice or a burden.

Understand what you need to feel to perform your best.

Being mentally prepared, for both swim practice and for racing, is a huge part of performing at your best. You do a series of things to get yourself into the “Zone” to swim fast. Things like: a pre-race routine, rituals (favorite goggles, for instance), pump-up playlists, and so on.

Elite athletes are able to get themselves fired up when they are tired or the environment is maybe a little more chill (a sleepy morning session at a swim meet, for example).

Bryant, under the stewardship of his coach Phil Jackson and George Mumford (a mindfulness specialist and author of The Mindful Athlete), incorporated meditation into his preparation to help him increase or decrease his arousal levels.

Most importantly, it’s having the awareness of how you need to be feeling in order to perform at your best.

Be about your greatness every day.

There is no shortage of people who talk about their big goals. But showing up and doing the work is a completely different thing.

Put your goals down on paper, make a plan for them, and show up every day and do the work. Talking about greatness is easy.

But living it, on the days when that alarm clock is blaring at you, you are wrapped in your warm sheets, and the allure of other activities tugs at your attention, the difference will be cast. 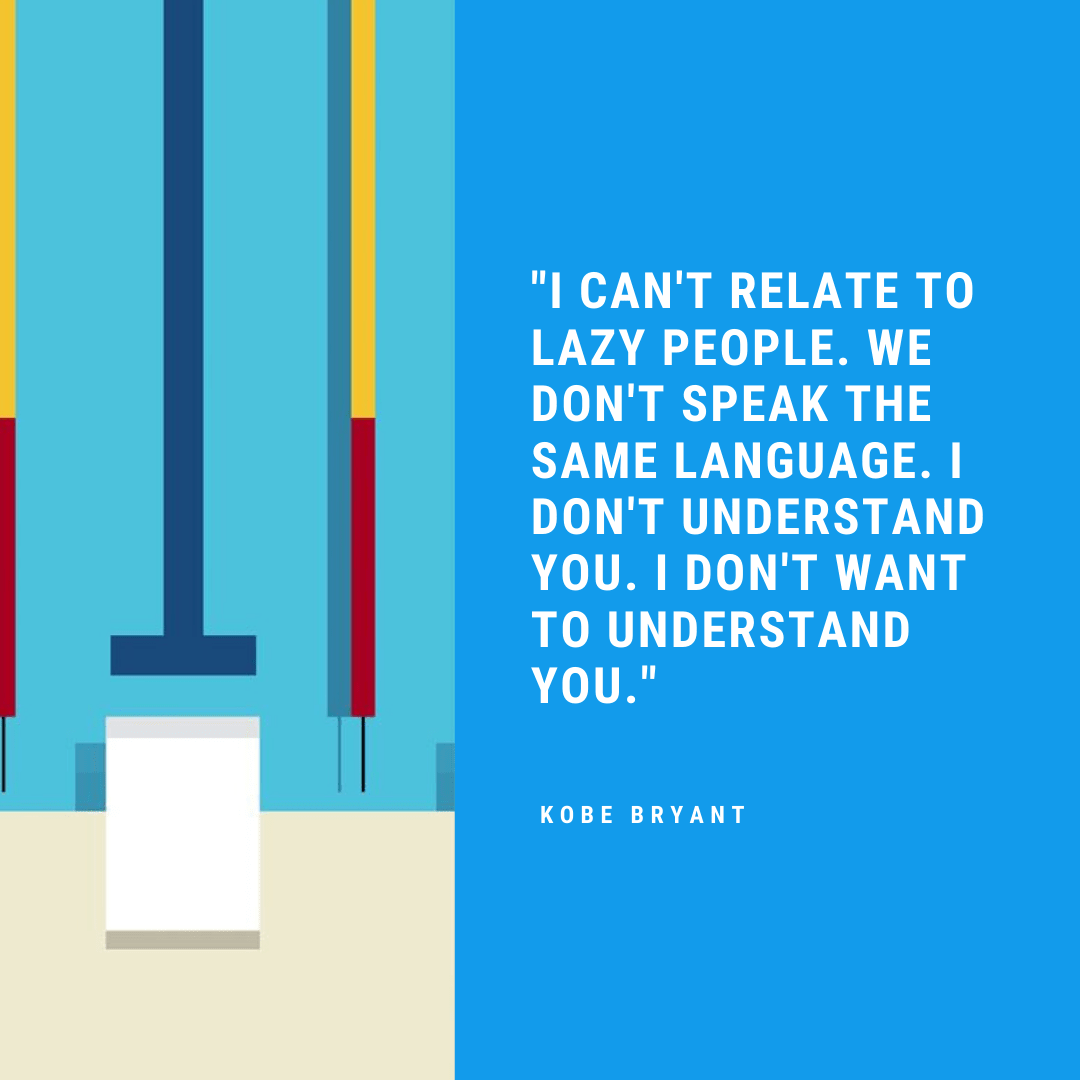 Build a process you believe in, and then defend it.

When you have a process that you believe in, and that you are willing to defend, the results tend to take care of themselves.

Having a killer mindset isn’t about wanting a big goal, but rather having that daily mindset each day with your preparation. It’s about showing up and doing your absolute best on days where you are tired, aren’t feeling it, and have every excuse imaginable to take it easy or mail in your effort.

Do you race the way you practice? Are the laps you do in competition simply an extension of what you have already done in training, or do you rely on the hype of competition and the magic of taper to give you a performance that doesn’t mirror what you have done in practice?

Bryant understood that the game-winning shot was simply another shot. Just another rep of many.

When viewed this way, the pressure of the moment evaporates.

When every lap in the pool is done with peak technique, focus, and intensity, swimming those same strokes and laps in competition become the default.

Mastering the fundamentals is the new shortcut.

The basics of swimming never get old. How tight is your streamline? How good is your body position in the water? How much sleep do you get last night?

The basics look boring—everyone is obsessed with out-smarting each other and pursuing the latest shortcut. But the basics are the shortcut.

Elite swimmers make it look easy because they have mastered the fundamentals and basics to such an extent that it looks simple. Consistent mastery of the fundamentals will out-perform the shortcuts every time.

Moments of failure are opportunities for growth.

There will be moments where you struggle mightily in your journey. An injury you didn’t see coming. You choke on the biggest stage.

Take your moments of adversity and learn from them. Your mistakes, failures, and missteps are all screaming to tell you how you can get better.

Get injured? Nail your rehab work and come back stronger than ever. Choke on the biggest stage? Adjust your training and mental preparation to pressure-proof your mindset.

During Bryant’s rookie season, Bryant took the Lakers to the playoffs. In the deciding game, he threw up four airballs. The swimmer’s equivalent of doing a flip-turn and completely missing the wall. How did he respond?

Winners have a short memory.

Success brings its own challenges. The expectations change—now you are supposed to be winning. A lot of competitors will lose the hunger and the chip on their shoulder that got them up the mountain in the first place.

For champions, the perennial champion, the hunger doesn’t dissipate. Win or lose, they continue to work and do the same things that made them successful.

Where to Buy – Mamba Mentality by Kobe Bryant

Check out my list of favorite books for competitive swimmers here. I also have a must-read list for swim coaches that you can browse here.