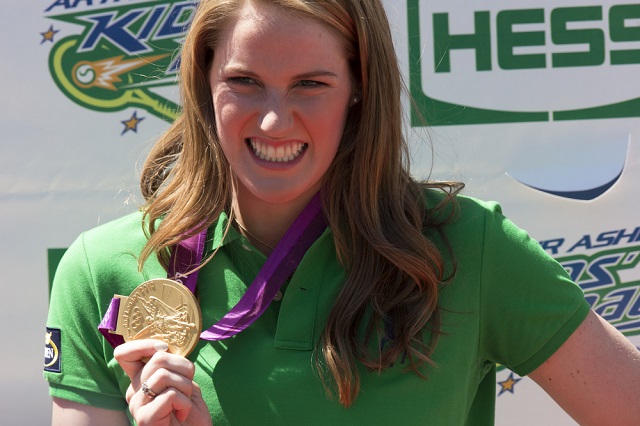 It’s hard to talk about USA Swimming without Missy Franklin’s name coming up. Since her performance in London 2012, where she netted four gold medals after her junior year in high school, she has become the focal media point for women’s swimming in the United States.

And for good reason.

Outside of her viciously fast swimming, her made-for-swimming back-story (she was asked to choose between representing Canada – her parents are Canadian – or the USA), and her bubbly, dancey personality, Franklin exudes an air of authenticity that is sorely lacking among high profile athletes.

Here are five more reasons to dig what Missy Franklin is putting down:

1. She got her scuba license so that she could help promote a film about the mobility and freedom water gives people with disabilities.

As she finished up her final year of high school in Colorado Franklin and her best friend went to the Denver Aquarium and got SCUBA certified to help promote “The Current,” an adaptive sports documentary developed by Kurt Miller and Make a Hero, a non-profit devoted to “growing awareness about the life improving benefits of participation in adaptive sports and recreation for individuals with disabilities.”

Filmed in various locations across the planet, including the Bahamas, Mexico and Hawaii, also includes surfer Bethany Hamilton and Paralympic swimmer Mallory Weggemann.

2. She spoke at the funeral of slain 17-year old Colorado student Claire Davis.

3. She auctioned off a swim lesson with coach Todd Schmitz to support clean initiative One Drop USA.

While in Las Vegas last March for International Water Day Franklin auctioned off a 30-minute private swimming lesson with Colorado Stars head coach Schmitz, which according to the fine print also included arriving early to take in the last 30 minutes of her workout.

One Drop is a non profit which aims to provide clean and accessible water to those in need across the planet. It was established by Guy Laliberte, the founder of Cirque de Soleil in 2007.

4. Franklin serves as a Swim for Multiple Sclerosis Amabassador.

Swim for MS is a national initiative that is focused on encouraging swimming and awuatic exercise for those afflicted by MS, as well as promoting fundraising events (see: Swim-a-Thon) to raise funds for MS research. Franklin has served as a rep for them, and as an organization they have raised over a quarter million dollars for MS research since 2008.

5. She passed up millions in endorsements so that she could experience college life at UC Berkeley.

In most sports we are hearing of athletes making the jump to pro at younger and younger ages. In a consumer-driven society it’s to be expected; people want to be paid for their hard work and talent.

But unlike the high school seniors that are jumping into the pros, or the one-and-done college athletes taking up pro ball after one year, Franklin bucked the trend and decided that the experience of college life was worth more to her than endorsements.

Perhaps what makes this all the more notable is that Franklin lives in the rarefied air where we can talk the possibility of serious endorsements. Not since Michael Phelps has a swimmer commanded so much attention.