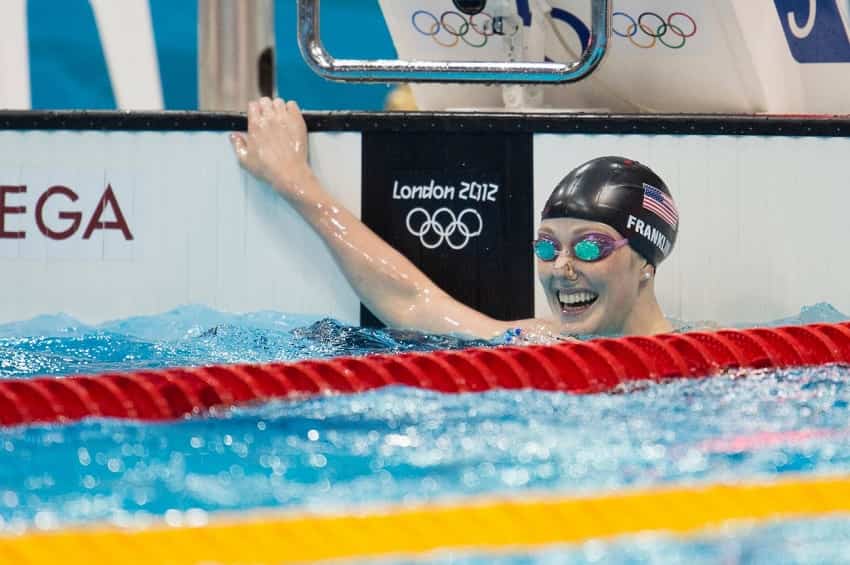 Missy Franklin is a 5-time Olympic gold medalist, 8-time World Champion, NCAA champion, and one of the most recognized faces the sport has produced in decades.

Her book, Relentless Spirit: The Unconventional Raising of an Olympic Champion is an auto-biography written with her parents, D.A. and Dick, giving swimmers and swim-fans a behind the scenes look of the triumphs and tribulations of Missy Franklin’s career in the water. 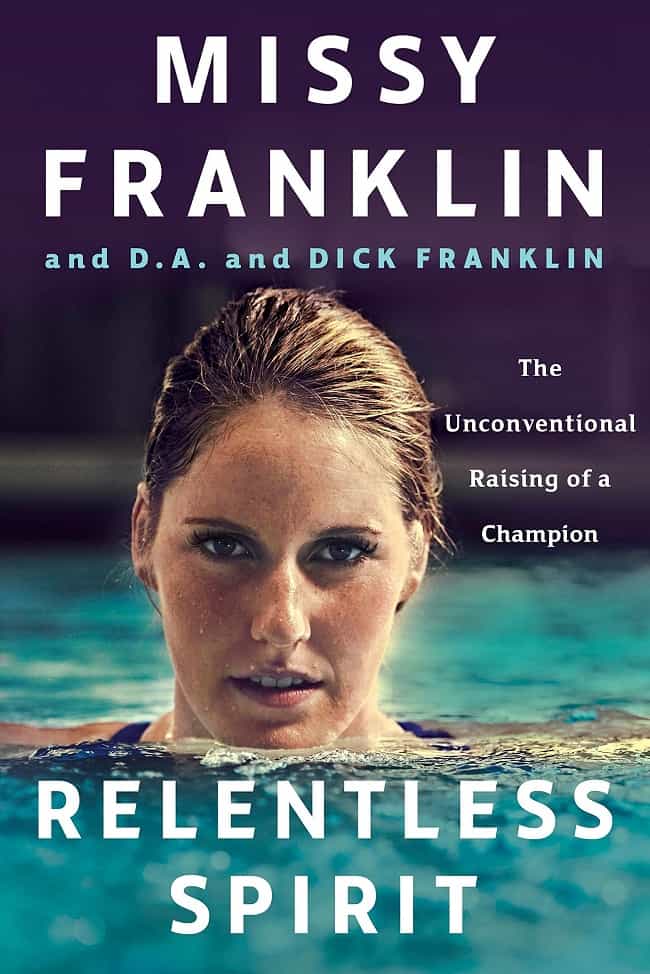 Below is a selection of quotes from the book, as well as some of my own thoughts and applicable lessons for swimmers, parents, and swim coaches.

The book provides a detailed background to the Olympic highlights and the bubbly smile that came to define Missy Franklin. The book is written very much in Franklin’s tone, both silly and serious. The book serves as a powerful primer on the politics of college swimming, the difficulties of choosing a swim team/coach, the drawbacks of sudden fame, and learning to deal with crushing disappointment while the world watches with a microscope.

Here are some of the highlights, key takeaways and quotes from Missy Franklin’s Relentless Spirit: The Unconventional Raising of an Olympic Champion.

“Relentless” was Franklin’s mantra. Her guiding principle. She would write it out on her wrist on race day, on the band of her swim goggles, engraved on a ring.

Even budding superstars can feel out of place

At her first big international meet, a Duel in the Pool competition in 2009, she was surrounded by the swimmers she’d idolized. Olympic champions. World record holders. Before they were her idols, now they were her teammates.

The opponent that matters is the one in your lane

Franklin always approached her races with the mindset that she needed to focus on what was happening in her lane, and her lane alone. Anything else was wasted focus and energy.

This didn’t mean she was oblivious to the competition.

At her first big international meet, her inexperience and ignorance meant that she wasn’t overly focused on other swimmers. There was power in not knowing any better.

Franklin’s dad was careful about how he tried to help his daughter motivate herself.

Missy’s parents would wake up for those early morning practices, get breakfast going, and be there to drive her to practice.

Missy watched the Sydney Olympics in 2000 and remembered wanting to be like “the American swimmers I was watching on television.”

Her role models and inspiration at that young age were also found at her local pool.

Franklin played a lot of sports growing up. That relentless ideal extended to other fields of play. 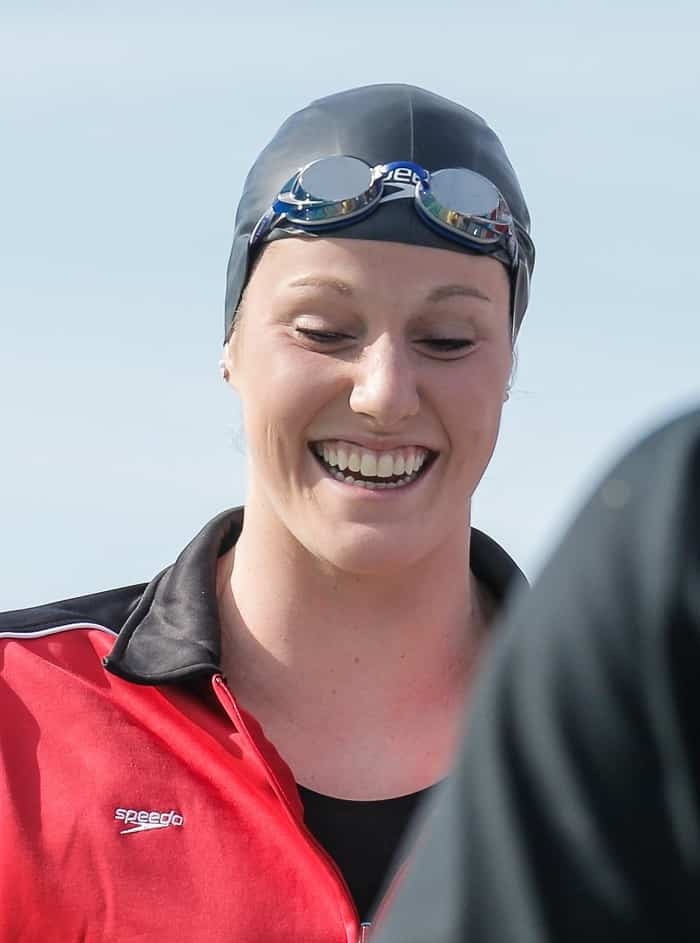 Adversity and failures are tools for growth

After not properly pacing a heats swim and missing finals at Junior Nationals, a 14-year old Franklin won the B-final in a NAG record, and in a time that would have won the A-final.

Her competitive fire was rooted in seeing what she was capable of, and not necessarily beating other swimmers.

Video review was a powerful way for Franklin to assess and improve her technique:

Franklin’s development as a swimmer was generalized. She didn’t specialize until even after she had made her first Olympic Trials cuts.

At her first Olympic trials, Missy was simply stoked to be there. At 13-years of age, there were no expectations.

Putting a plan together for success

The way that Missy set goals is similar to how Michael Phelps started with goal setting.

At age 12, Missy went to her coach, Todd Schmitz, and told him that she wanted to qualify for Olympic Trials. While some coaches would have scoffed, he replied, “Great! How are you going to do it?”

Success usually brings out the ugly side in others

After her massive performance in London, where she captivated the world, from her bubbly appearance in the viral USA Swimming lip sync rendition of Call Me Maybe, to her 4-gold medal winning performance, she was suddenly a superstar in the broader sport world.

The attention also came with some unexpected nastiness from others in the swim community.

It was her senior year in high school, and she’d committed to swimming for her high school team to help them win state.

A family from an opposing school sent the Franklins a batch of cookies with a card that read: “We hope you’ll convince Missy NOT to swim with the team so that the other girls will have their chance to shine.”

The path to Rio was far from easy

After the London Olympics, and a 6-gold medal winning performance at World Championships in 2013, expectations for Franklin were sky-high heading into Rio.

But training had become more of a grind.

After a disappointing swim at the US Olympic Trials, where she failed to qualify for the team in the 100m backstroke, Franklin had to do the usual media gauntlet:

Franklin qualified for the Olympics by swimming to second place at Trials in the 200m freestyle. But even though she’d won the event at world championships, and was the fastest ever in yards in the event, her confidence was low.

At the Rio Olympics, Franklin swam on the prelims squad of the 4x200m freestyle relay. But although she swam the second-fastest split in the morning, and had qualified individually for the Olympics in the event, she would not swim with the “A” squad during finals.

She told US coach Greg Meehan:

Be a champion in adversity too

It’s easy to be a role model for young swimmers when everything is going well. But it’s markedly different when things aren’t going well, when you aren’t performing up to expectations, when you feel the creep of imposter syndrome.

Be an “inspiration in disappointment”

Endings are rarely a gold medal or a world record. There’s only one given out, after all. More often than not, endings are fraught with disappointment, regret, sadness. But that doesn’t mean you can’t still be a champion in attitude and mindset.

Where to Buy “Relentless Spirit” by Missy Franklin

Missy Franklin: What Doesn’t Break You Makes You Stronger. Adversity and setbacks happen to us all. This is the story of how Missy Franklin battled back from back spasms to become the fastest woman to ever swim the 200-yard freestyle.

Missy Franklin and the Power of the Confidence Jar. Here’s a confidence-building tool that Missy Franklin used during her reign to keep herself ready-to-go leading into big meets.