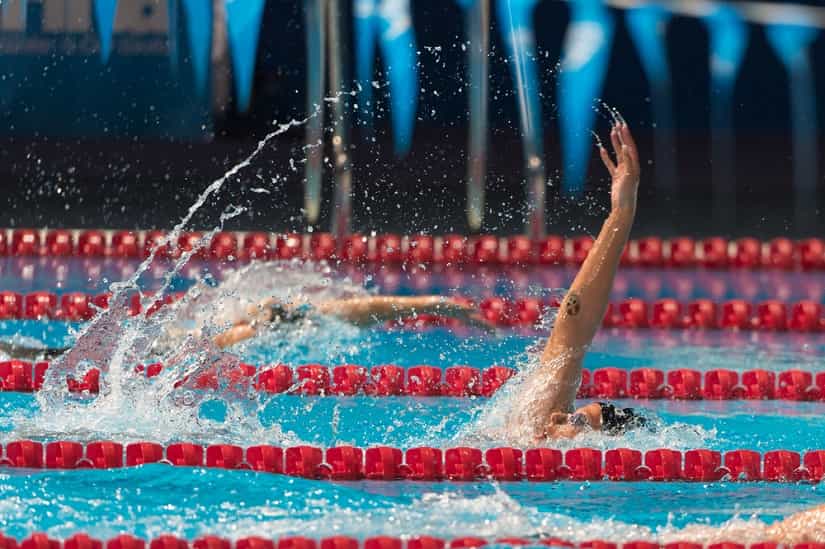 The research, best practices, and who started this tradition–here is everything you ever wanted to know about shaving down for swimmers.

The sport of competitive swimming can appear a little strange to the casual outsider. With the limited exposure the sport gets, it’s understandable.

With the added interest of being an Olympic year comes some of the typical non-swimmer questions:

Here is everything you need to know about shaving down for swimmers.

Who was the first competitive swimmer to shave down?

The first widely known example of a swimmer shaving down was an Australian named Jon Henricks, who in in 1953 won a series of Australian national titles after being encouraged to shave down by his father Clyde Henricks.

A few years later, at the 1956 Melbourne Olympics, Henricks and fellow Australian Murray Rose would both shave down, splitting five Olympic gold medals between the two of them.

The pair moved to the United States in 1960 to train at USC, and the practice of shaving down, which Rose credited with giving him improved sensory awareness in the water, quickly became commonplace with other competitive swimmers. [1]

The pre-competition shave-down was from then on an ubiquitous part of the competitive swimming experience, leading to countless hotel towels being marked with blood, clogged shower drains, and ingrown hairs.

While there isn’t a whole lot of scientific literature out there on shaving down for swimmers, there is some research that sought to separate fact from fiction when it comes to shaving down.

A group of nine male collegiate swimmers were tested prior and after shaving down, with their performances compared a group of teammates who didn’t shave down. All the swimmers did a 400-yard breaststroke swim at 90% effort as well as a tethered effort.

In a separate group of 9 swimmers who shaved versus 9 who didn’t, “velocity decay” was reduced in the shaved group when it came to doing a streamlined push-off as hard as they could.

Another study that was more focused on researching the taper aspect of a swimmer’s meet preparation found that efficiency went up after the swimmers shaved down, with distance per stroke increasing by 5%.

And finally, a group of six swimmers were asked to swim 4×200 at descending effort with plenty of rest between reps. The following day they repeated the set after a full-body shave-down.

Blood lactate levels went down by 28% at submaximal speed and 23% at maximal speed. The researchers noted that this kind of improvement “is nearly as great as that resulting from a season of collegiate swimming training.” [2]

In other words, shaving down flat-out works.

How does shaving down increase swim performance?

Although we know that it works, quantifying the exact improvement we can expect is difficult and ultimately will come down to the individual athlete.

As mentioned in the research above, it does do something for our feel for the water. Shaving removes dead skin from the surface of our body, bringing nerve endings closer to our skin, making it effectively more sensitive. 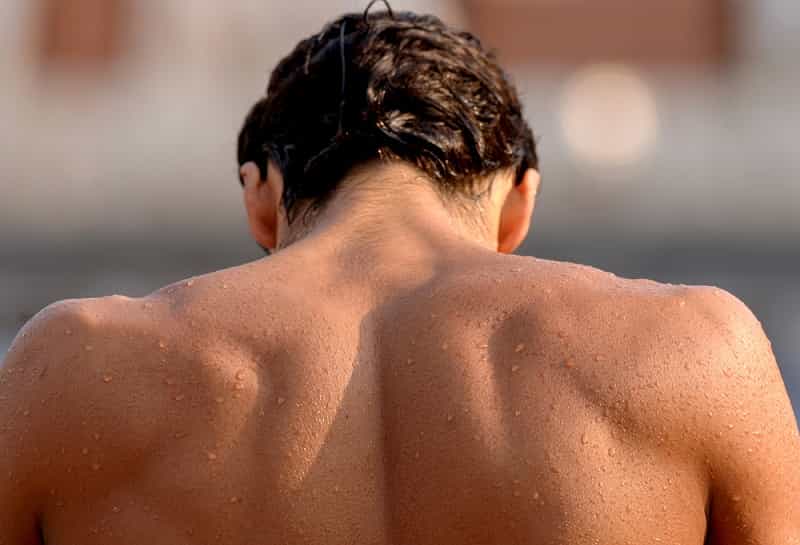 Another study done at Indiana University showed that shaved skin was significantly more sensitive than unshaved skin. The effects of this were hypothesized to improve motor control and efficiency of movement in the water:

Increasing the sensitivity of the skin increases the amount of feedback regarding the body actions, resulting in enhanced motor skills leading to higher propulsive forces and reduced water resistance.”

In other words… more efficient swimming.

This description matches up to my own experiences in the water. For a lack of a better way to explain it, I simply feel the water better. Manipulating the water is easier. Gliding through and across the pool feels more natural and efficient.

There is also the active drag component of shaving down. How much drag reduction is going to vary from swimmer to swimmer. If you are hairy like a Christmas sweater there is obviously going to be a bigger advantage in reduced drag.

The improvement that comes with shaving down is a blend of drag reduction and heightened skin sensitivity, but just how much benefit the swimmer receives from each aspect will boil down to individual differences.

When should I shave down?

Depends on how hairy you are, obviously. For the silver-backed guerillas among us shaving every day at the big meet might be necessary, while for others they can get away with a quick touch-up midway through the meet and be good to go.

Some swimmers will shave down the first morning of the competition or after heats after the first preliminaries to “save the shave” for their first finals session.

I always did mine the night before, blocking off a couple hours to do a first pass with an electric clipper, and then my first draft before taking a shower to check out my handiwork and inevitably having to do a whole bunch of touch-ups.

5 Best Practices for a Successful Shave Down

For the ladies on the team shaving down isn’t that much of a big deal. Been there, done that. But for the fellas, it is a confusing and terrifying time when you add in the extra energy and anxiety that comes with being fully tapered.

Here are some tips for making your shave down go a little more smoothly:

Have a spotter. Especially for you fellas, and especially for your back. Better yet, have a shave-down social, where groups of swimmers get together to collectively bleed all over hotel towels and have moments of panic when they think—just for a harried moment—that they might have shaved a corner of their nipple clean off.

Start with clippers. This is an absolute must for the guys. Do your first run with an electric clipper to clear the brush. Otherwise you will go through 7.2 times the amount of razor blades and it will take twice as long.

Plan ahead. Have all the gear you will need ahead of time. Running around in an unfamiliar city at midnight the day before the big race looking for razors in a half—shaved panic is no way to be resting the night before the meet. Have plenty of shaving cream, razors, and a block of time reserved for the big shave.

Start at the bottom. Your legs are easiest to reach, and water and shaving cream will later be falling off your trunk and arms, it’s best to get your lower body finished and dealt with first.

Shave in the direction your body hair grows. Ingrown hairs suck. They can end up causing you serious discomfort over the next days and weeks as they struggle to grow out. Areas like your upper thighs, chest and your navel are particularly sensitive to this particular agony of shaving. Cutting against the grain will appear to give you a closer shave, but it is not worth it. An against the grain cut means you end up cutting the hair follicle below the skin line. The red uncomfortable unpleasantness that follows is that short little body hair turning and growing back into you. Ouchie.