Urban Meyer is a three-time national football college champion. Here are six lessons in leadership and culture that swim coaches can pull from Urban Meyer’s book, “Above the Line.”

Urban Meyer is one of the most successful college football coaches in recent history. During the 2000s, Meyer won three national championships; two in Florida, and a third with the Ohio State Buckeyes in 2014.

It is that title run during 2014, where the Buckeyes would beat Oregon in the national championship, that serves as the spine for Meyer’s leadership manual, Above the Line: Lessons in Leadership and Life from a Championship Program.

Even though Meyer’s book is perhaps most directly applicable to football coaches, the lessons and leadership principles are just as relevant for swim coaches. If you want to build excellent team culture on your swim team, Meyer’s book provides a thorough blueprint and set of starting points.

Here are some of my favorite takeaways from Meyer’s Above the Line, along with key quotes, passages, and some of my own thoughts and highlights for swim coaches. 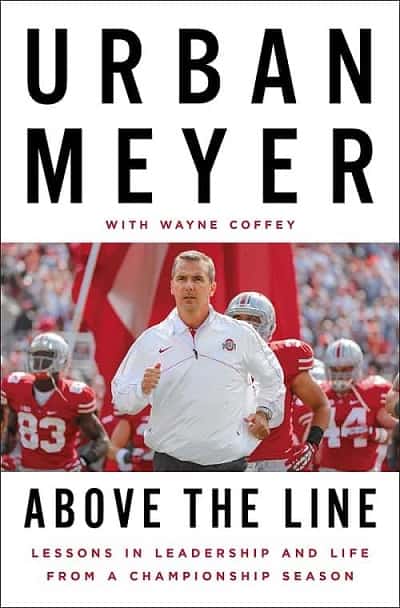 Where to Buy — Above the Line by Urban Meyer

Excellent leadership is a system, not an accident

My favorite takeaway from Meyer’s book is that leadership should be treated as a system and a process.

Instead of hoping that natural leaders will emerge or that a high-performance culture will assemble on its own, be intentional about creating a climate that reliably produces outstanding leadership.

Unlike most leadership books for coaches that outline a bunch of motivational slogans and platitudes, Above the Line actually gets into the trenches of how to build a high-performance team from the ground up.

Focus on developing a high-performance process

When you master the process, the everyday grind of training, you master the result. There is no winning on game day without conquering your process on a daily basis.

Start by winning the mental battle

Success in the water is a direct result of relentless effort applied consistently. There’s no big secret or shortcut or way to outsmart the hard work to perform at a high level.

This also means doing the hard work in having a clear plan and using the right mental skills to make sure that you are winning the daily battle between your ears.

Culture drives results, not the other way around

Swimming is a results-based business. Either you win your race, make the state cut, break the world record… Or you don’t. Pretty cut and dry.

While it is natural and tempting to drive all of our attention and focus at the results, the big end goals, the championship trophies and banners, it’s the culture that makes it all possible.

Avoid the urge to be so blinded by the shine of the trophies, accolades, and medals that the culture goes to the wayside.

The culture is the thing that makes the results possible. Not the other way around.

The 10-80-10 principle: 10 percent of your group are the high performers, the elite, the nucleus. 80 percent are the “people who go to work, do a good job, and are relatively reliable.” The remaining 10 percent are “uninterested or defiant.”

Rushing through problems and challenges rarely create a positive outcome. These kind of knee-jerk reactions are not thought out. In order to craft smarter solutions to challenges, Above the Line leaders take time to pause and think deeply.

For leaders, this very often means solitude, being open to new ideas, and regularly ear-marking time to focus deeply.

Where to Buy — Above the Line by Urban Meyer

10 Things Swimmers Can Do for Exceptional Team Culture. A swim team’s culture can boost your chances of success in the water just as easily as it can hold you back. Here’s how you, the elite-minded swimmer, can do your part to create exceptional team culture.

Daniel Coyle’s “The Culture Code”: How Swim Coaches Can Build a Legendary Culture. Coyle breaks down what makes high-performing teams so great. Here are some of my favorite takeaways and lessons for how swim coaches can build great culture.